A clone of The Beauty of Life (BL) site called The Lion has existed since early July. Facebook blocked it from sharing links following Snopes' request for comment on the new site. 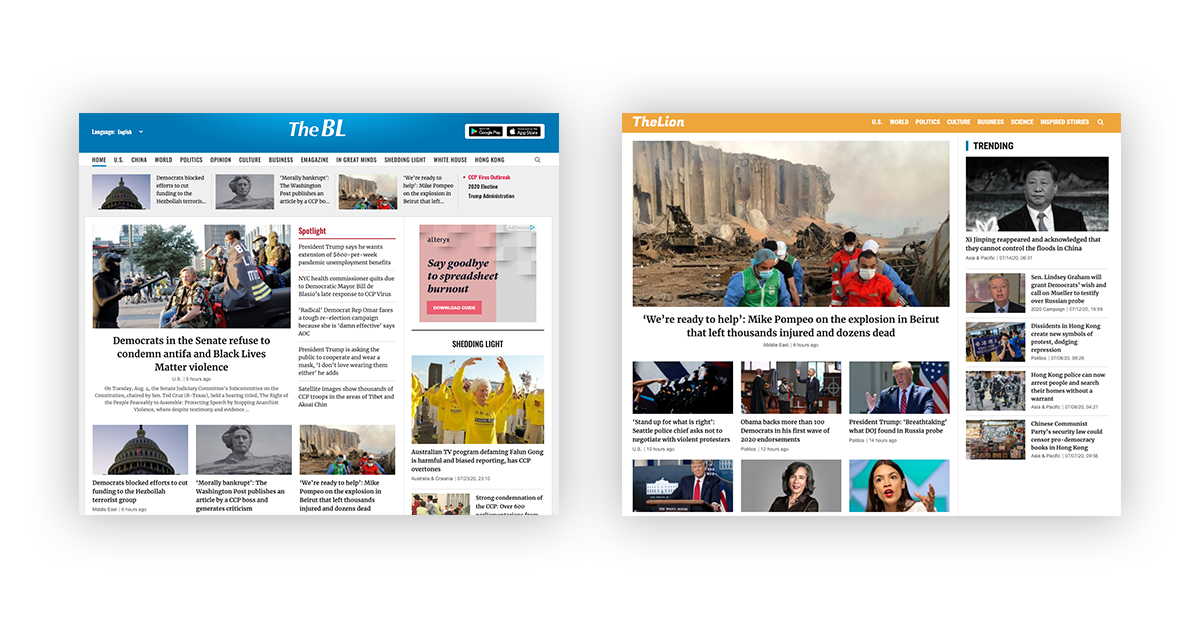 Image Via Screencapture (The BL, left, and The Lion)

In a series of reports published between October and December 2019, Snopes exposed an Epoch Times-linked media outlet called The Beauty of Life (or The BL) for inauthentically amplifying its content using a massive network of fake Facebook profiles. Part of a sprawling web of loosely connected pro-Trump media properties associated with a spiritual movement known as Falun Gong, The BL played a clumsy game of cat and mouse with journalists —  adapting their methods as previous tactics were exposed.

In our three months' of coverage, for example, the profile photos used by the outlet's fake accounts shifted from stolen pictures, to obvious stock photos, to computer-generated faces incapable of being reverse-image searched. Ostensibly, that game came to an end in late December when Facebook removed the entire network for coordinated inauthentic behavior and blocked all links to The BL from being shared.

Here, Snopes reports that The BL briefly found a way around that link-sharing ban by making a complete clone of The BL — branding it as a new, unrelated website that goes by the name The Lion. The BL did not respond to our request for comment. The Lion lists no contact person, and its "About us" page is blank. This quick-fix operation was no less clumsy or obvious than any of The BL's previous attempts to circumvent Facebook's policies. On Aug. 4, Snopes reached out to Facebook seeking comment on The Lion; a link ban was placed on The Lion the following day. In response to our query, a Facebook spokesperson simply directed us to their "Continuous Enforcement" policies that monitor "efforts to re-establish a presence on Facebook by networks we previously removed for CIB [Coordinated Inauthentic Behavior]."

TheLionTimes.com was registered on July 5, 2020 — about six months after The BL was banned from Facebook. All of the stories on The Lion, which appear without any author byline, can also be found on TheBL.com (where they do contain an author byline). In most cases, all you need to do to find The BL version of a story that appears on The Lion is to swap out "theliontimes" with "thebl" in the URL: Outside of a shared URL structure, the site betrays other tell-tale signs that both websites are drawing from the same database of material in a coordinated way. The post ID (i.e., the number assigned to the story in each website's database) is identical between outlets, as is the timestamp. This holds true even for stories published by The BL well before The Lion existed.

Despite only a month of existence, The Lion found a large and receptive Facebook audience in pro-Trump or conspiracy theory-focused groups. An article published two days after The Lion's creation garnered over 93,000 Facebook interactions and over 14,000 shares, according to CrowdTangle data downloaded on Aug. 4, 2020: Snopes discovered this scheme in part because several articles from The Lion were shared amongst a network of far-right, Islamophobic Facebook pages associated with fringe evangelical figure Kelly Kullberg — a network Snopes first reported on in May 2019.

Zadronzny, Brandy and Ben Collins.   "Trump, QAnon and an Impending Judgment Day: Behind the Facebook-Fueled Rise of The Epoch Times.”     NBC News.   20 August 2020.