Can the President Really Order the Military to Occupy US Cities and States?

Is Trump’s warning bluster? Or does the president have the authority to send the military into American cities? 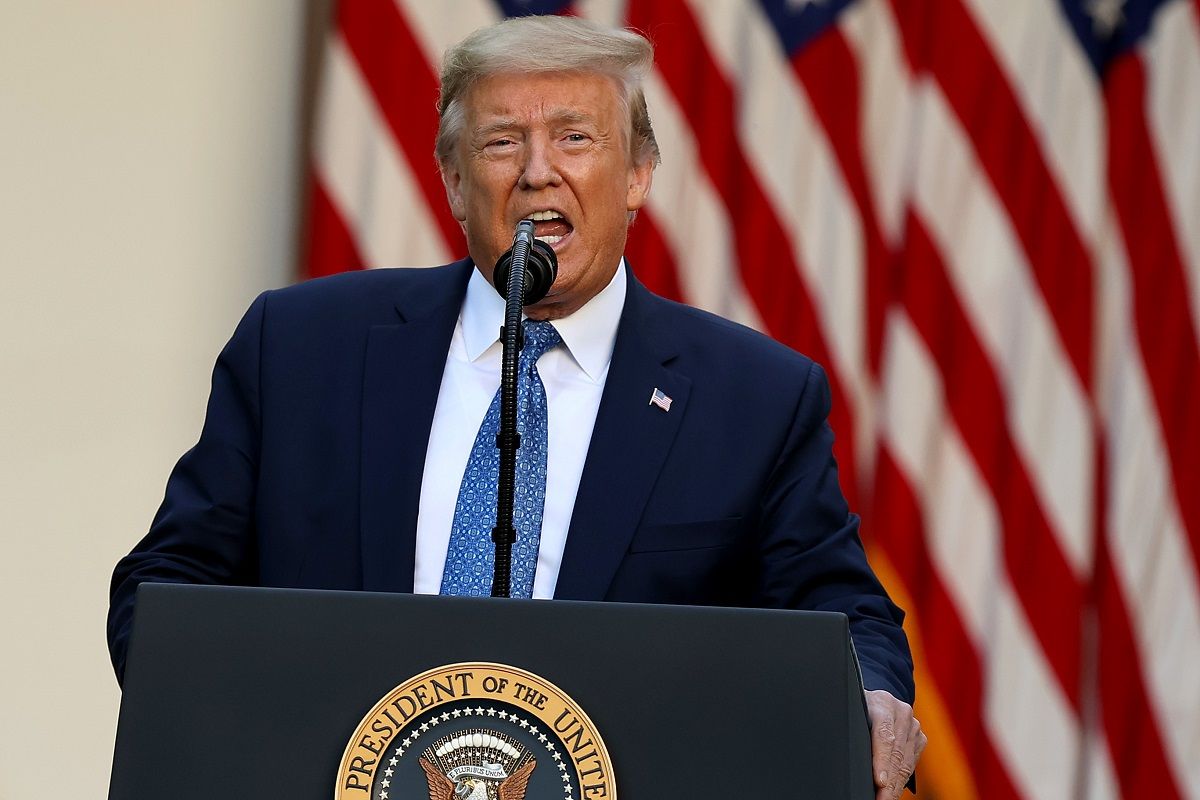 After a week of both peaceful protests and violent chaos in the wake of George Floyd’s death, President Donald Trump announced, “If a city or state refuses to take the actions that are necessary to defend the life and property of their residents, then I will deploy the United States military and quickly solve the problem for them.”

Is Trump’s warning just bluster? Does the president have the authority to send the military into American cities?

The answer to this question involves a web of legal provisions that help define the president’s constitutional roles as commander in chief and chief executive of the country and that simultaneously try to balance presidential power with the power of state leaders.

‘Protect states in times of violence’

Tracing back to the Magna Carta, the British charter of liberty signed in 1215, there is a longstanding tradition against military involvement in civilian affairs.

However, the U.S. Constitution guarantees that the national government will protect the states in times of violence and permits Congress to enact laws that enable the military to aid in carrying out the law.

Almost immediately after the Constitution’s enactment in 1787, Congress passed a law that allowed the president to use the military to respond to a series of citizen rebellions.

Troops serving as what’s called “posse comitatus,” which translates roughly to “attendants with the capacity to act,” could be called to suppress insurrections and help carry out federal laws.

Following the Civil War, the national government used troops in this capacity to aid in Reconstruction efforts, particularly in states that had been part of the Confederacy.

The use of troops in this manner may even have influenced the outcome of the 1876 presidential election of Republican Rutherford B. Hayes. That happened when, in return for agreeing to withdraw federal troops from the South, Democrats informally agreed to the election of Hayes when the disputed election was thrown to a congressional commission.

Two years later, Hayes signed into law the Posse Comitatus Act, which prohibited the use of the military in civilian matters.

The Posse Comitatus Act has not changed much since that time. The law prohibits the use of the military in civilian matters but, over time, Congress has passed at least 26 exemptions to the act that allow the president to send troops into states.

The exemptions range from providing military personnel to protect national parks to helping states in carrying out state quarantine and health laws. 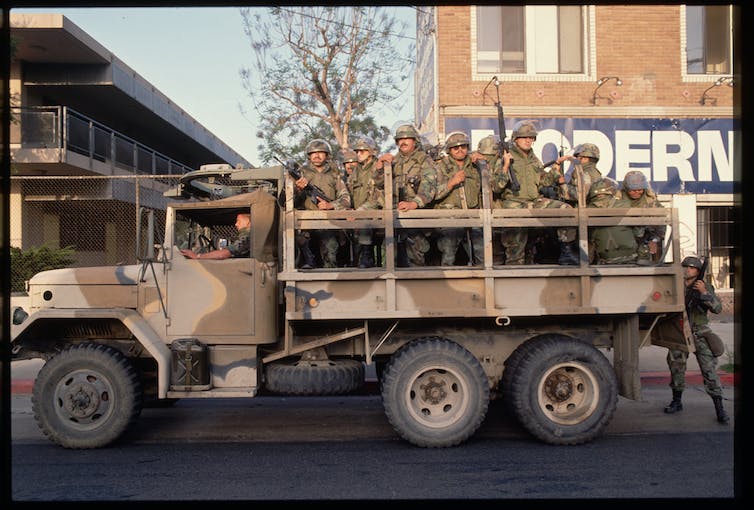 Military troops arrive in Los Angeles to restore order after rioting occurred in the wake of the verdict in the Rodney King case in 1992.
Peter Turnley/Corbis/VCG via Getty Images

What exemption would President Trump use if he wants to send the military to one or more states?

He would likely rely on the Insurrection Act, which governs certain circumstances when the president can use the military. Signed by Thomas Jefferson in 1807, Congress originally passed the law in order to help fight citizen rebellions against federal taxes.

Over time, the law has evolved to allow the use of troops in other circumstances. For example, Presidents Eisenhower, Kennedy and Johnson used the Insurrection Act in the 1950s and 1960s to send the military to enforce court desegregation orders and to protect civil rights marchers.

It was last invoked by President George H.W. Bush in 1992, when he ordered 4,500 troops to Los Angeles after rioting erupted in response to the acquittal of police officers charged with beating Rodney King.

The Insurrection Act says that the president may use the armed forces to subdue an insurrection or rebellion and take such measures as he considers necessary to suppress violence.

But before doing so, he must issue a proclamation ordering insurgents to disperse and return to their homes.

While state governors and legislatures also have the legal authority to ask the president to use troops in this manner, none have done that during this period of unrest. The states have preferred to rely on a combination of local law enforcement and the National Guard, which is under state command, not federal.

Not only does this strategy enable governors to maintain authority over their states’ responses to the clashes in the wake of George Floyd’s death, but it also keeps things more straightforward legally and politically. 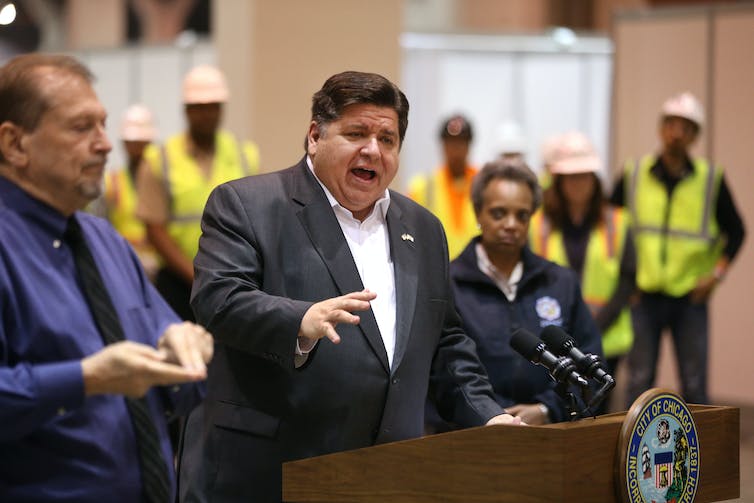 After President Trump’s threat to send troops to quell violence, Illinois Gov. J.B. Pritzker, middle, told CNN ‘I reject the notion that the federal government can send troops into the state of Illinois.’
Chris Sweda-Pool via Getty Images

Reliance on the Insurrection Act raises a host of political and practical questions about who is in charge when the military sends troops into a state.

For example, despite the fact that the act was invoked in response to the Rodney King riots, the military actually was not used as directed. The Joint Task Force Commander in control of the mission appears to have been confused regarding how the Insurrection Act worked alongside the provisions of the Posse Comitatus Act. He issued an order prohibiting troops from directly supporting law enforcement and that led to numerous denials of requests for assistance.

Questions about the federal government’s authority in the wake of the 2005 Hurricane Katrina in Louisiana raised similar concerns.

The administration of President George W. Bush determined that it had authority under the Insurrection Act to send federal troops to the area, despite the fact that Louisiana’s governor was opposed to military assistance.

For political reasons, President Bush did not end up deploying troops but, in 2006, Congress amended the law to address concerns that the military was unable to provide effective assistance to states in emergency situations.

The amendment was later repealed when all 50 state governors raised objections to what they perceived as a grant of unilateral power to the president.

These examples suggest a real difficulty balancing governmental responses to domestic crises. States need the flexibility and authority to respond as they see fit to the needs of their citizens.

But the federal government can and often does serve as a supplemental resource. As the events of the past week illustrate, striking an effective balance is rarely a straightforward thing.