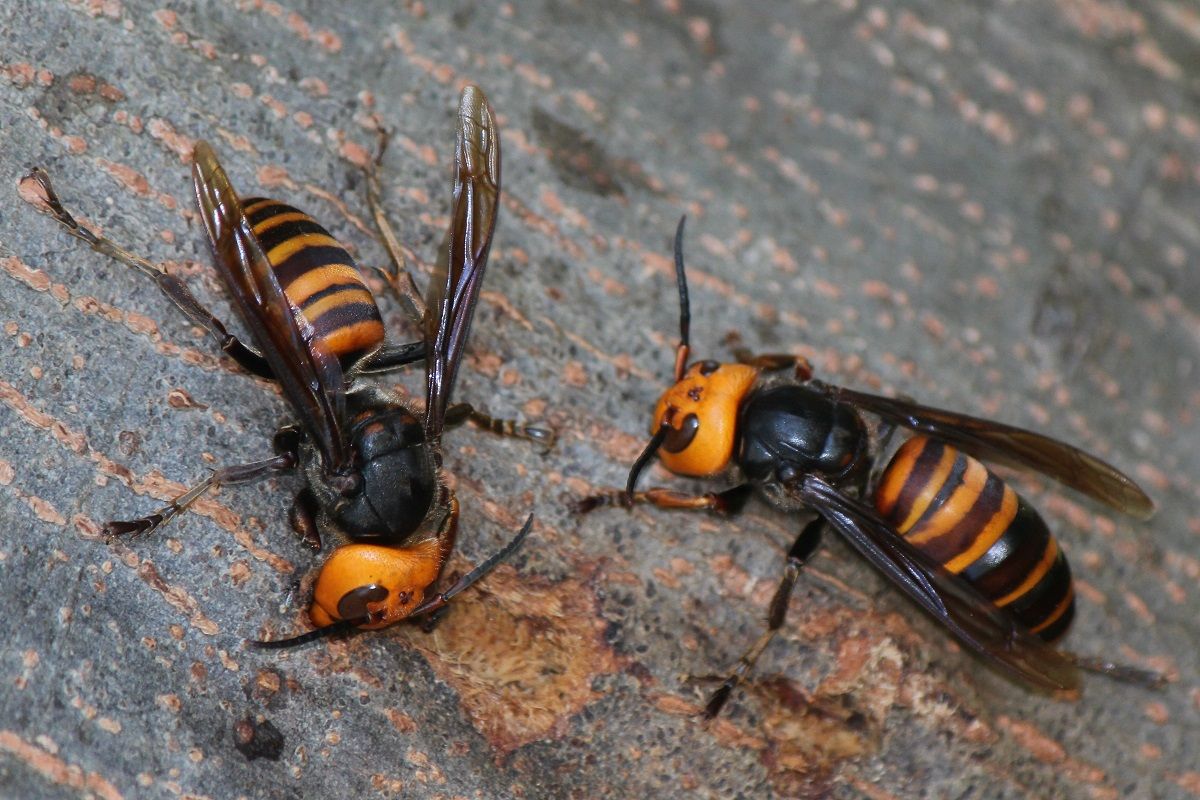 Editor’s note: According to recent press reports, two Asian giant hornets – a species not known to occur in North America – were found in northwest Washington state in late 2019, and a hornet colony was found and eliminated in British Columbia. Now scientists are trying to determine whether more of these large predatory insects are present in the region. Entomologist Akito Kawahara explains why headlines referring to “murder hornets” are misleading.

1. How common are these hornets in Asia, and how much alarm do they cause?

The Asian giant hornet (Vespa mandarinia) is fairly common in many parts of Asia, where it is called the “Giant hornet.” Growing up in Japan, I saw them relatively frequently in the mountains outside of Tokyo.

These insects are large and distinctive, with a characteristic orange head and black-banded orange body. Like any other social wasp, they will defend their nest if the colony is disrupted. But in most cases they will not do anything if people aren’t aggressive toward them.

Giant hornets have longer stingers than a honeybee’s, and hornets do not break off their stingers when they sting. Because hornet stingers can puncture thick clothing, people should avoid hornets and their nests whenever possible.

Giant hornets frequently are attracted to tree sap: I was stung by one when I was looking for butterflies on trees. The sting is painful, but the swelling and pain in most cases subside in a few days.

Just as with honey bee stings, an allergic reaction, or anaphylaxis, can occasionally put people in the hospital. In rare cases, severe reactions can become fatal. But wasp and hornet stings killed less than 13 people a year in 2017 and 2018 in Japan – less than 0.00001% of the national population – in a country where many people spend time in the woods.

If you are allergic to bee and wasp stings, it is best to avoid getting close to these insects and their nests, wear white clothing outdoors (they are attracted to dark colors), and avoid carrying open-top sweet drinks such as sodas in the woods. 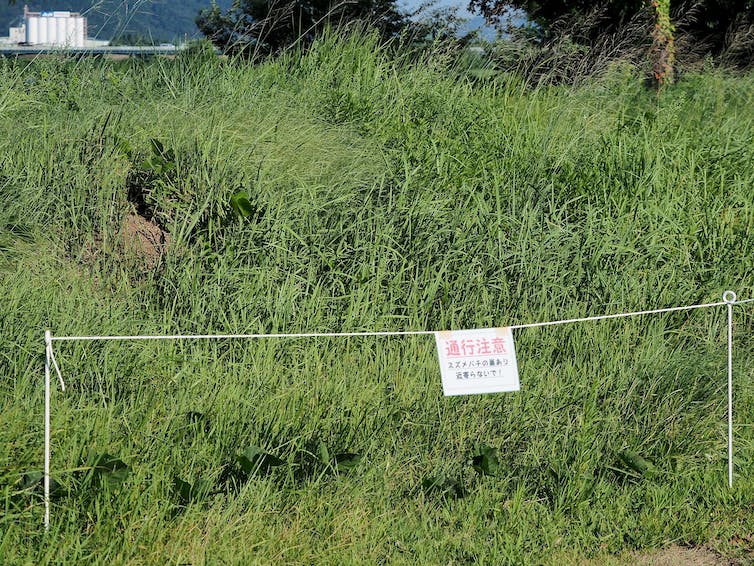 2. Are you surprised that the hornets have appeared in North America?

To some degree, yes. Most likely, a single, fertile queen hornet entered Canada via shipping packaging and created the colony that was discovered in 2019.

It’s easy for invasive species to travel this way. More than 19,000 cargo containers arrive daily at U.S. ports, and inspectors can only do random searches of shipping containers. One estimate suggests that just 2% of shipments are searched for evidence of harmful organisms such as plant pests. Many invasive species are intercepted, but some do get through.

It’s very unlikely that an entire colony of hornets was transferred to North America. Colonies of this hornet are often large, and the hornets would be visible and potentially aggressive if their nest were disturbed.

A genetic test indicated that one of the hornets found in Washington was not related to the Canadian colony, but those results have not been published or peer reviewed. The Giant hornet has not been found in 2020 in either the U.S. or Canada. 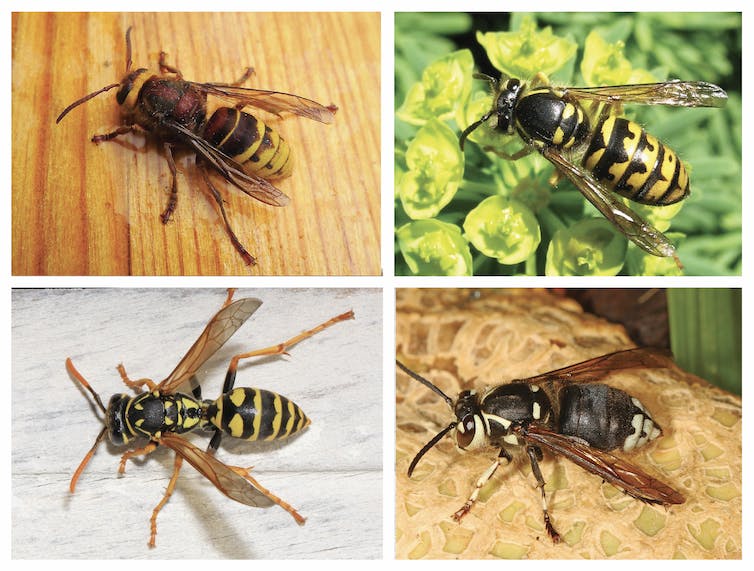 3. What kind of conditions do these insects need to live?

Giant hornets are fairly common in mountainous regions of Asia, but they’re not often seen in large cities or highly urbanized areas. They usually nest at the base of large trees and inside dead logs. The fact that they can’t tolerate extremely hot or cold temperatures makes it unlikely that they would spread to very hot or cold areas of North America.

If active colonies are discovered in 2020 in the Pacific Northwest, which has a more temperate climate, it’s possible that they could spread there. However, it is unlikely that this would happen quickly, as foraging ranges of Vespa are only about 2,300 feet (700 meters) from their nest.

The key to prevent spread is surveillance. Anyone in the Pacific Northwest should be alert for Giant hornets while they are outdoors this summer and fall.

4. If more hornets are found, could they threaten honeybees and other pollinators?

Possibly. Some media posts have described destruction of honeybee nests by what could have been Giant hornets, but honeybees are not these insects’ only prey. The hornets feed on different kinds of insects, and bring captured dead prey back to their hive to feed to their young.

In Japan, beekeepers surround their hives with wire screen nets to protect them from hornets. North American beekeepers can replicate these with wire netting from local hardware stores.

Many honeybees in Asia have the ability to protect their hive from intruding Giant hornets by scorching them. They wait for a hornet to enter their nest, then mob it by surrounding it completely with their bodies. Each honeybee vibrates its wings, and the combined warming of honey bee bodies raises the temperature in the center of the cluster to 122 degrees F (50 degrees C), killing the hornet. Carbon dioxide levels in the nest also increase during this process, which contributes to the hornet’s death.

Yes, very much so. In parts of Japan, people consider these hornets beneficial because they remove pests, such as harmful caterpillars, from crops. They are also thought to contain nutrients, and have been used as ingredients in Japanese food and some strong liquors. Some people believe the hornets’ essence has medicinal benefits.

People who live in Vancouver, Seattle or nearby should certainly take note of what these insects look like. They are 2 inches long or more, with a 3-inch wingspan, and have distinctly orange heads and broad striped orange and black-banded abdomens. That’s different from typical North American hornets, which have yellow or white bodies with black marks.

In the unlikely case that you see a Giant hornet in Washington state, do not try to remove nests yourself or spray hornets with pesticides. Cutting down trees to prevent nesting sites is also unnecessary, and can affect many other kinds of native wildlife, including beneficial insects that are needed for pollination and decomposition. Many native insects are declining globally, and it’s important to make sure these insects are not affected.

Instead, take a photo from a distance and report it to the Washington State Department of Agriculture. Photos are essential to verify that identifications are accurate.

Consider also uploading your images to iNaturalist, which is one of the primary sources for information on tracking wildlife. The images are archived and carry data, such as location, time of observance and the insect’s morphological features, that scientists can use for research.