What Are the ‘Reopen’ Protesters Really Saying?

The “anti-lockdown” and #Reopen protests in the U.S. have powerful and secretive backers, but real Americans are on the streets expressing their opinions. 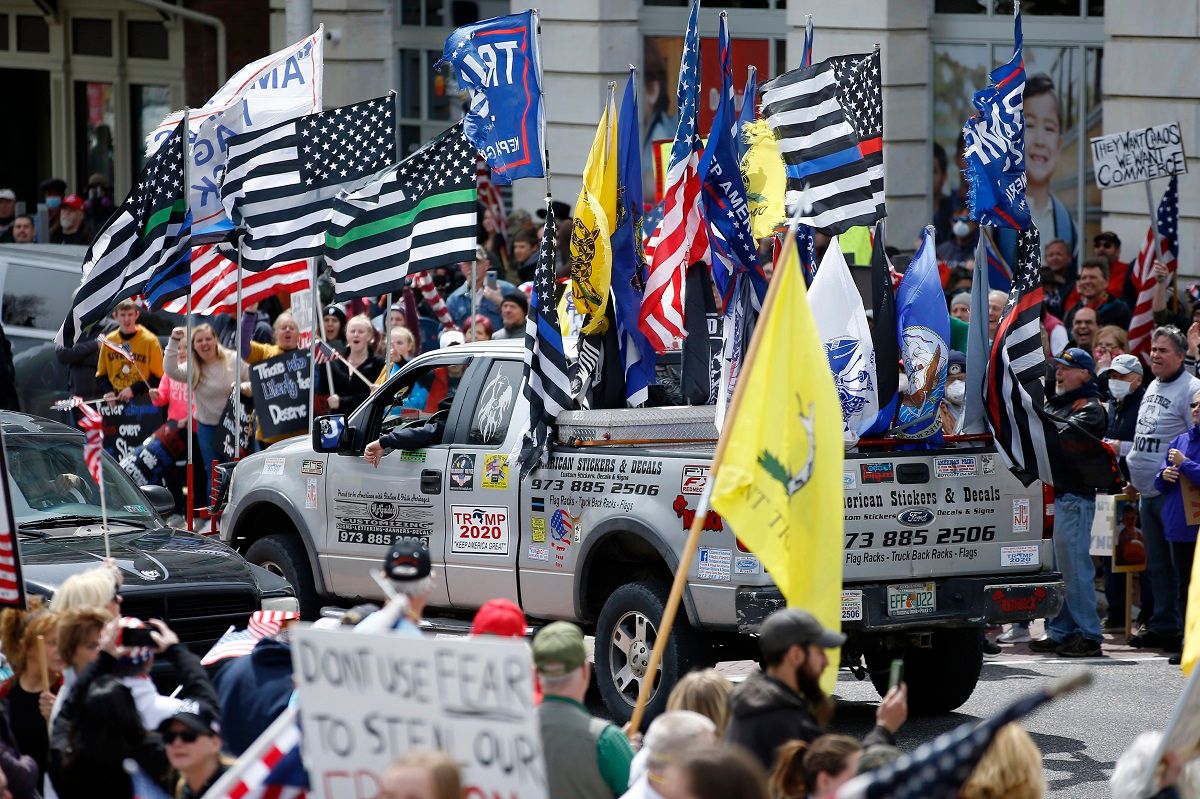 The “anti-lockdown” and #Reopen protests in the U.S. have powerful and secretive backers, but there are real Americans on the streets expressing their opinions.

As an ethnographer – someone who studies cultural participation – I’m interested in who those Americans are, and why they’re upset.

I spent the last week in what you might call an online road trip, studying 30 posts of protest footage from events in 15 cities. I found some shared themes, which don’t fit well with popular narratives about these protests.

1. Poverty is taboo, but work is ‘essential’

Despite the economic toll the lockdowns are taking on America’s poor, no protesters put their own poverty on display, such as posting signs asking for help.

Instead, they held signs with more general language, like “Poverty Kills,” or expressed concerns like the restaurateur in Phoenix, Arizona, who told a passing videographer he was worried about his 121 “suffering, devastated” employees.

Their messages made clear that they didn’t want to ask for a handout or charity – but they were asking to be allowed to work. Protesters across many states asserted their work – or even all work – was “essential.”

A young man at an Olympia, Washington, event described work as a source not only of money but identity: “I wanna go back to work! That pride that you feel every day when you go home from work? That’s like nothing that can … be taken.”

Protest signs in Denver, Colorado, included the plaintive “I want my career back” and the entrepreneurial “Dogs Need Groomers.” 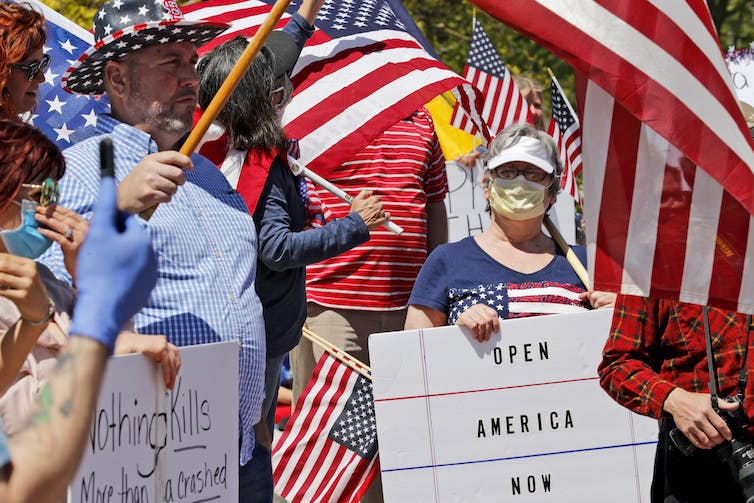 Outside the Missouri Capitol on April 21, some protesters wore masks – though others didn’t.
AP Photo/Jeff Roberson

2. The threat of the virus is serious

Despite alarming news reports that protesters were ignoring social distancing, many of the protesters observed safety guidelines. Photos showed at least some people wearing masks. A TikTok video recruiting participants for Michigan’s Operation Gridlock encouraged protesters to be safe; drone footage shows that most participants at the state capitol stayed in their cars, away from other people.

Protesters’ signs didn’t really downplay the threat of the virus, but rather compared it with potential harm from the lockdown. For instance, a sign in Denver was headed “Trading Lives” and featured a scale with virus deaths on one side, with unemployment, suicide and homelessness on the other.

3. Anti-science displays are on the fringe

There were protesters at several rallies who wore anti-vaccination T-shirts and held signs suggesting they don’t trust public health experts and scientists.

But only one protest was dominated by that theme. At that one, on April 18 in Austin, Texas, hundreds of attendees chanted “Fire Fauci!” referring to Dr. Anthony Fauci, director of the National Institute of Allergy and Infectious Diseases, who has been a frequent public face of the federal government’s efforts to fight the virus. That was also the rally where right-wing radio host Alex Jones, who runs a conspiracy-theory website, drove around in a truck egging on attendees’ chants through a megaphone.

At the other events, it appeared protesters had been expecting higher numbers of infections than actually happened. Rather than seeing that as evidence of the success of social distancing, they seemed to interpret this as saying the science was no longer valid. “The models were wrong” was on more than one sign, suggesting protesters had paid attention to the scientific models at first but had come to believe the disease’s seriousness had been exaggerated.

4. People want to fight the virus in familiar ways

Even when protesters acknowledged the threat of the virus, few of them were calling for medical experts to provide the solution. I saw none of the demonstrators calling for more widespread testing, for instance.

When they did express concern, protest signs coupled it with a desire to fight the contagion. In Boise, Idaho, one sign read “Freedom over Fear.” In Denver, one said “Don’t let your mask be your muzzle.”

However, the protesters wanted to fight the virus in ways that were more familiar to them and, perhaps, more empowering: In Harrisburg, Pennsylvania, a giant green truck had “Jesus is my vaccine” scrawled on its side.

Some protesters demanded governments allow people to make their own decisions, and even displayed the pro-choice slogan “My Body My Choice.” Others showed up with guns. One man in Frankfort, Kentucky, blew a shofar, a Jewish religious instrument made from a ram’s horn blown at the start of a battle. 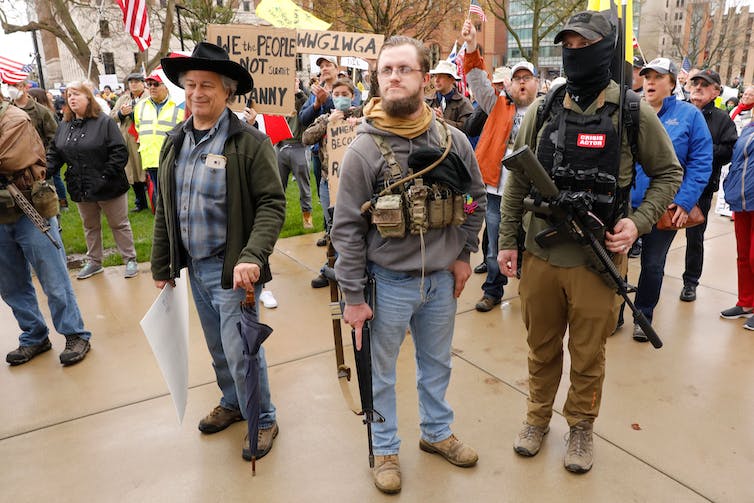 Armed protesters were among the crowd in Michigan on April 30.
Jeff Kowalsky/AFP via Getty Images

5. ‘Tyranny’ depends on who governs, not how

In many of the events across different states, protesters objected to what they called “tyranny,” and held up the Revolution-era “Don’t Tread On Me” Gadsden flag to symbolize their resistance to government rules. They were not objecting to President Donald Trump’s April 13 declaration that, as president, his “authority is total” over the nation.

Instead they were objecting to governors’ lockdown rules, which they highlighted as overreaching their power. Many protesters likened the government’s behavior to Nazis, with protesters adding “Heil” before Democratic governors’ names.

No male governor was targeted as viciously and overtly as female Michigan Gov. Gretchen Whitmer. A widely circulated poster depicted her dressed as Adolf Hitler, giving a Nazi salute beside a swastika. Other demonstrators talked about Whitmer as though she were mothering them instead of governing them, like one who insisted, “We’re not her children!”

One clearly visible theme in the #Reopen protests is how white the attendees are – but not just in terms of their own race. Their compassion also seemed limited to fellow white people. None that I saw were calling attention to the fact that the coronavirus doesn’t hit all populations equally: Blacks and other racial minorities had less access to high-quality health care before the outbreak, and as a result are less healthy and less able to fight off the virus when it strikes.

There was overt racism toward the Chinese, too, echoing words of the president and other political leaders, as on the Jefferson City, Missouri, sign that read “Tyranny is spreading faster than the China virus.”

7. Divided and distanced, is it a movement?

Most protesters did not refer to these protests as a movement. I found just one video offering a vision that they could form one. In that livestream from Operation Gridlock, at one point the videographer shouted, “‘merica!”

Then, his unseen companion replied in a meditative tone about the potential he saw on that road: “Together we’re strong, divided we’re weak. That’s the establishment’s biggest fear, for the people to get together and not be divided. … That’s what they fear the most. Because we have the power.” It was not clear if those people with the power included the much greater number of people across America who were sheltered in place.