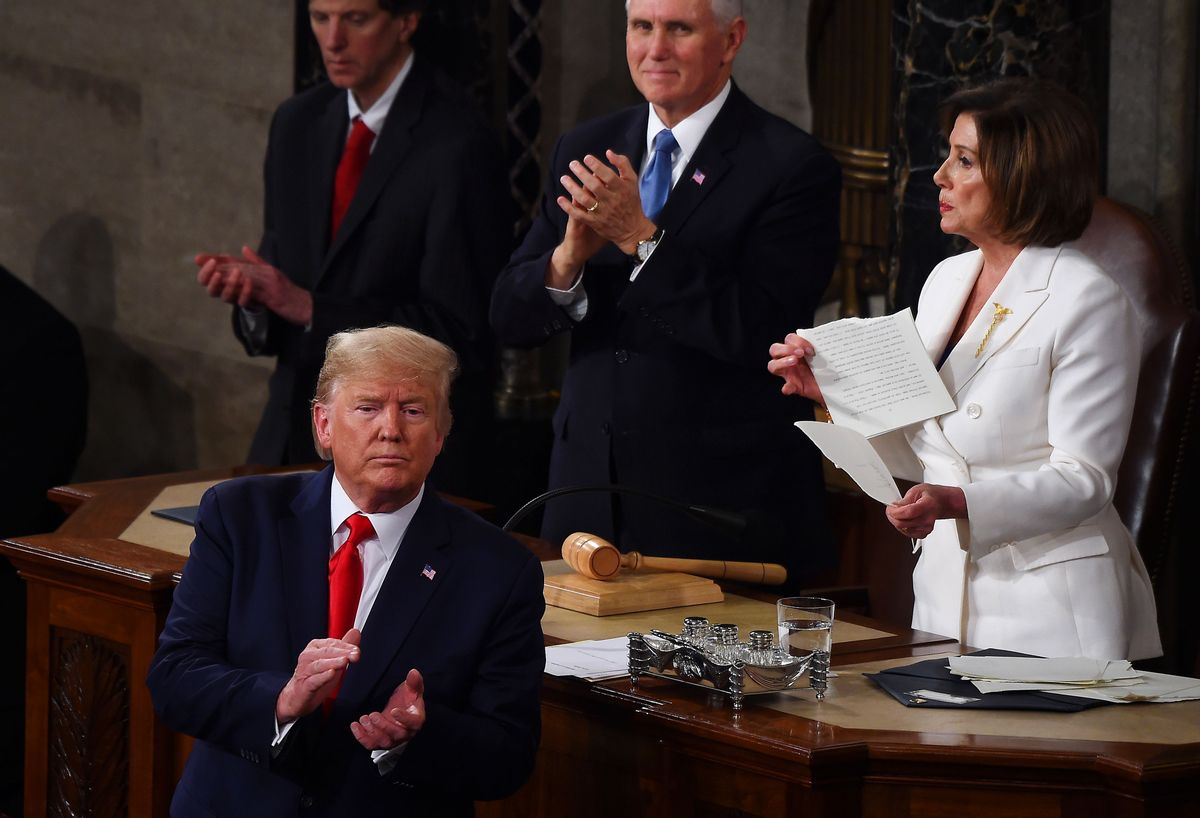 In the run-up to the 2020 U.S. presidential election, social media platforms are making new rules against manipulated media content, including that of news organizations. But those rules didn't stop the spread of a viral video altered to make it appear as though House Speaker Nancy Pelosi tore up a paper copy of President Donald Trump's State of the Union speech during segments in which he talked about members of the military.

The platforms faced similar scrutiny in 2019 for declining to remove a viral video that was slowed to give the false impression that Pelosi was speaking in public while drunk.

The widespread reach of these distorted videos "highlights the subtle way that viral misinformation could shape public perceptions in the run-up to the 2020 election. Spreaders of misinformation don’t need sophisticated technology to go viral: Even simple, crude manipulations can be used to undermine an opponent or score political points," The Washington Post cautioned in 2019.

At that time, the viral spread of the slowed video purporting to show a drunk Pelosi raised red flags in an environment in which social media platforms had been widely criticized for enabling foreign adversaries, most notably the Russian government, to disrupt the 2016 presidential election. Those problems raised questions over whether the platforms would play a similar role in spreading disinformation during the 2020 election cycle.

Both Facebook and Twitter have implemented policies against manipulated media in the aftermath of that controversy, but in both cases, the adopted policies did not stop the spread of yet another manipulated video targeting Pelosi.

On Feb. 6, 2020, two days after the State of the Union address, Trump posted a tweet containing a manipulated C-SPAN video that appeared to show Pelosi tearing up her paper copy of Trump's speech during portions in which he talked about sensitive topics, such as the sacrifice of military members and a scholarship for a young girl in need.

But in reality, Pelosi did not tear up her paper copy of the speech during those portions. She tore it up after the speech had concluded. Pelosi later explained she did so because she regarded it as a "manifesto of mistruths." In a press conference following the event, Pelosi stated, "It was quite appalling to hear the president say the [130], at least, million families in America that are faced with pre-existing medical conditions – a benefit that is afforded to them in the Affordable Care Act [also known as Obamacare] – that he was protecting that benefit, when, in fact, he has done everything to dismantle it. In fact, we are fighting him in the courts right now to preserve that benefit. That misrepresentation was appalling and so clearly untrue."

We asked both Twitter and Facebook for explanations as to why the most recent tweet containing the misleading portrayal of Pelosi's actions during the State of the Union was not removed.

For its part, Twitter on Feb. 4, 2020, rolled out a new policy banning manipulated media. Per the rule, "You may not deceptively share synthetic or manipulated media that are likely to cause harm. In addition, we may label Tweets containing synthetic and manipulated media to help people understand the media’s authenticity and to provide additional context."

However, the tweet posted by Trump containing the manipulated video wasn't affected because, according to a Twitter spokesperson, the platform is obligated to provide 30 days' notice before making a significant change to its terms of service. The policy doesn't go into effect until March 5, 2020.

Facebook on Jan. 6, 2020, also implemented a rule against manipulated media. The portion of the rule pertinent to the Pelosi video states users may not post any video "that has been edited or synthesized, beyond adjustments for clarity or quality, in ways that are not apparent to an average person, and would likely mislead an average person to believe that a subject of the video said words that they did not say."

In a heated exchange online with Facebook, Pelosi's deputy chief of staff, Drew Hammill, tweeted, "The latest fake video of Speaker Pelosi is deliberately designed to mislead and lie to the American people, and every day that these platforms refuse to take it down is another reminder that they care more about their shareholders’ interests than the public's interests."

Facebook spokesperson Andy Stone responded to Hammill by stating the video did not violate the platform's rule against manipulated media. "Sorry," Stone tweeted in reply, "are you suggesting the President didn't make those remarks and the Speaker didn't rip the speech?"

We sent Facebook a question asking whether the video misleads people into thinking she made a non-verbal "statement" about specific topics in Trump's speech by tearing up a copy of it as he said them, when she had not done so.

We received no response to this question from Facebook in time for publication.

Snopes.com also was the subject of one such incident. On Feb. 11, 2020, a Twitter user manipulated a Snopes fact check pertaining to 2020 Democratic candidate Pete Buttigieg by posting screenshots that contained a misleading truth rating. Snopes determined the claim that a teenage Buttigieg had been arrested on suspicion of killing dogs was "False," but the Twitter user made it appear as if the rating were "True." Twitter removed this post and suspended the account of the user who posted it.