What to Think When You're Thinking About Impeachment: 5 Essential Reads

The substantive part of the impeachment trial of U.S. President Donald Trump is now underway. 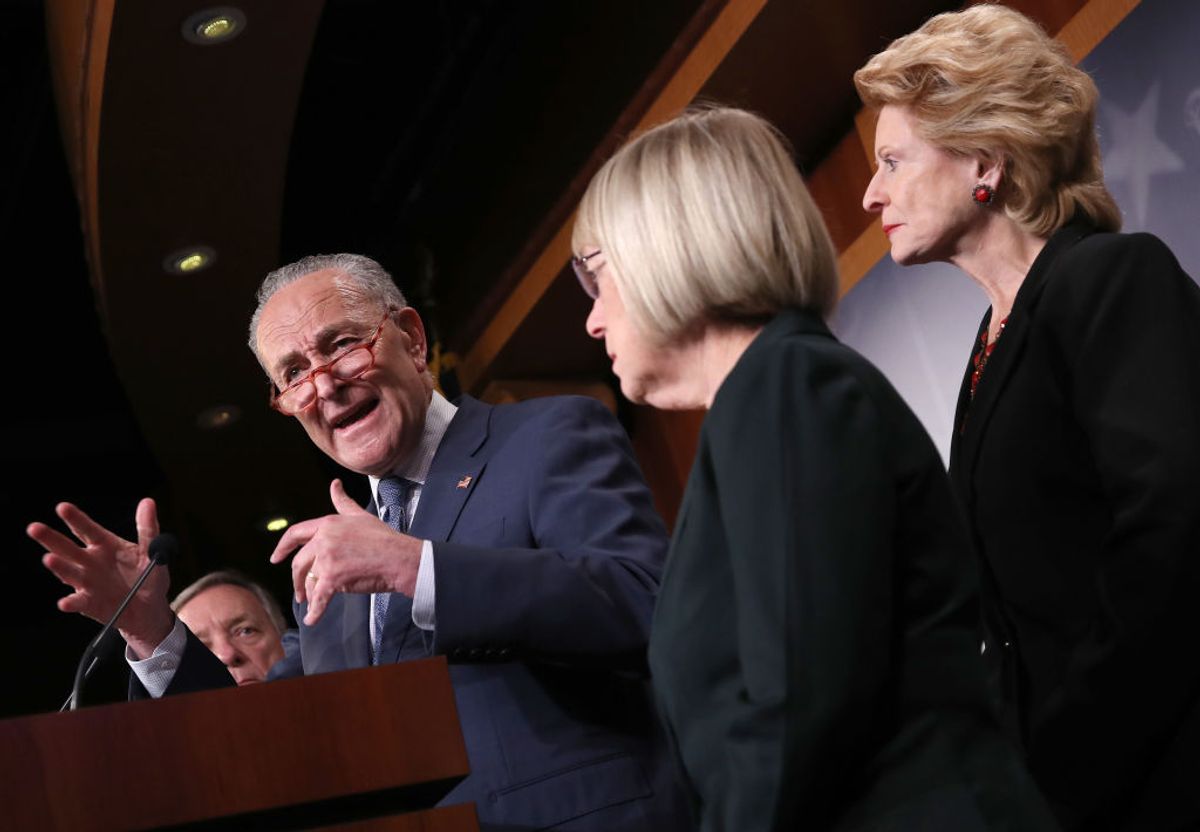 If you have a big appetite for politics news, you’re not going to go hungry this week.

The substantive part of the impeachment trial of U.S. President Donald Trump now begins, after Democrats from the House of Representatives delivered the articles of impeachment to the Senate last week and senators, as well as Chief Justice John Roberts, were sworn in.

At The Conversation, we’ve followed this story since it began as a whistleblower’s report back in what seems like prehistoric times – last August. We’ve been happy to leave the tick-tock reporting to our colleagues in the rest of the media – this happened and this happened, and then this happened. What we’ve done here is provide you with stories that tell you about the things related to the impeachment that you don’t see – the history, the trends, the legal implications.

Here are five of those stories to help you make sense of the news over the coming days and weeks.

Could the Senate convict and send Trump packing – only to have the voters return him to the White House?

None of the three presidents who previously faced impeachment – Andrew Johnson, Richard Nixon and Bill Clinton – was convicted. None of them sought reelection after their trials. Johnson simply chose not to run, while Nixon and Clinton, both in their second terms, were barred by the Constitution (as opposed to some outcome related to being impeached) from running a third time.

But Trump is already running for reelection. Austin Sarat, a scholar of American legal and political history at Amherst College, writes that “a little-known wrinkle in the Constitution might allow Trump to be reelected president in 2020 even if he is removed from office through the impeachment process.” 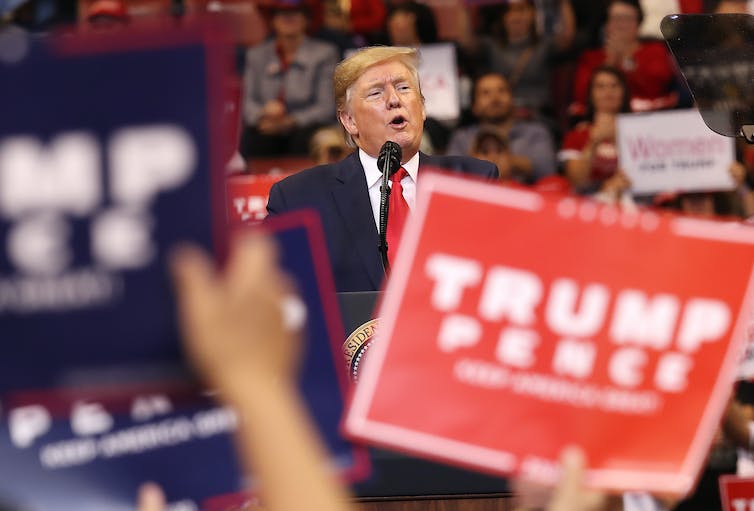 Much of the talk among Trump’s Republican defenders has been that the impeachment battle is about Democrats forcing Trump from office as a way to undo the 2016 election.

But the Founders, who debated and wrote the rules for impeachment, did not see impeachment solely as a way to remove a president.

Law and ethics scholar Clark Cunningham from Georgia State University writes that the Founders explained at the Constitutional Convention that “impeachment was intended to have many important purposes, not just removing a president from office.”

Those purposes, writes Cunningham, were several: “To remind both the country and the president that he is not above the law; to deter abuses of power and to provide a fair and reliable method to resolve suspicions about misconduct.”

You’d think a major congressional investigation that produced buckets of evidence of presidential misfeasance would cause that president’s polling numbers to tank.

“Investigations often damage a president’s reputation in the public eye – but that may not matter to a historically unpopular president like Trump,” write Douglas L. Kriner, at Cornell, and Eric Schickler, at University of California, Berkeley.

The two scholars have studied the relationship between hearings into alleged executive branch misconduct and public opinion, and conclude that in most cases – that is, not Trump – “investigations systematically eroded public support for the president. Historically, every 20 additional days of investigative hearings cost the president roughly 2.5% in the polls.”

But Trump’s popularity among voters has been unusually stable. Kriner and Schickler write that the U.S. may have arrived at time when the public, and Trump’s allies in Congress, may simply not be moved by the kinds of evidence that once caused a president’s approval ratings to decline. 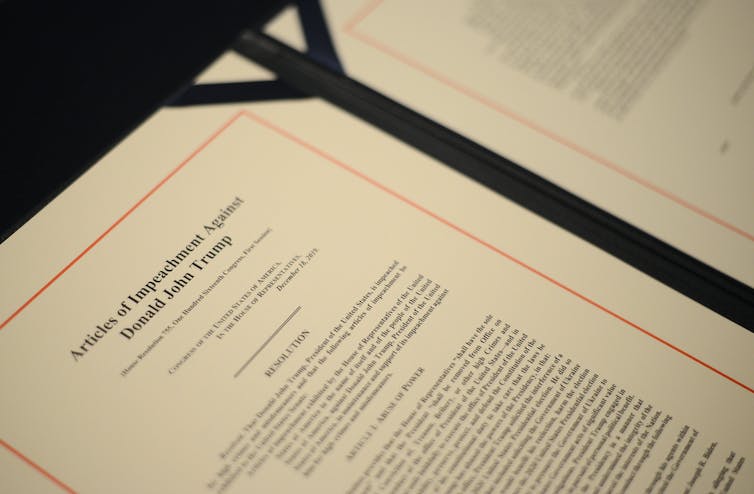 The articles of impeachment.
Astrid Riecken For The Washington Post via Getty Images

The president’s private lawyer, Rudy Giuliani, may be a unique character on the national stage, but the role he played in the Ukraine scandal was hardly unique.

For generations, presidents and their intelligence agencies have tried to avoid congressional scrutiny of their dealings with foreign powers, writes legal scholar Charles Tiefer, from the University of Baltimore. One of the ways they escape accountability is by using emissaries who are not part of the government to carry out their secret foreign policy moves.

That gets Congress mad. So then there are hearings.

“Central to all of these clashes are attempts by intelligence agencies, the president and the executive branch to withhold damning information from Congress,” writes Tiefer. “Another common element is the use of civilians to carry out presidential or intelligence agency agendas.”

Giuliani’s shadow foreign policy work for Trump in Ukraine is just the latest in a series of incidents – the Kennedy administration’s attempted assassination of Cuban leader Fidel Castro, the Reagan administration’s Iran-Contra affair – that presidents have tried to shield from congressional scrutiny.

5. Watch what you call those senators

On Thursday, Jan. 16, United States senators stood in the grand Senate chamber and swore an oath to be administer “impartial justice” in the impeachment trial of President Trump.

“Senators at an impeachment trial are not the equivalent of a jury and they are not held to a juror’s standard of neutrality,” he writes.

Lubet recounts when, during the 1999 impeachment trial of President Bill Clinton, Democratic Sen. Tom Harkin of Iowa pleaded with Chief Justice William Rehnquist, who was presiding over the trial, to stop legislators from calling themselves “jurors.”

Harkin said “the framers of the Constitution meant us, the Senate, to be something other than a jury.”

“The Senate is not simply a jury,” he ruled. “It is a court in this case.”

Rehnquist told the House managers “to refrain from referring to the senators as jurors.” They were thereafter called “triers of law and fact.”