Could a Woman Defeat Trump? What Political Science Research Says

A spat between Sens. Bernie Sanders and Elizabeth Warren prompted a question about a future woman president. 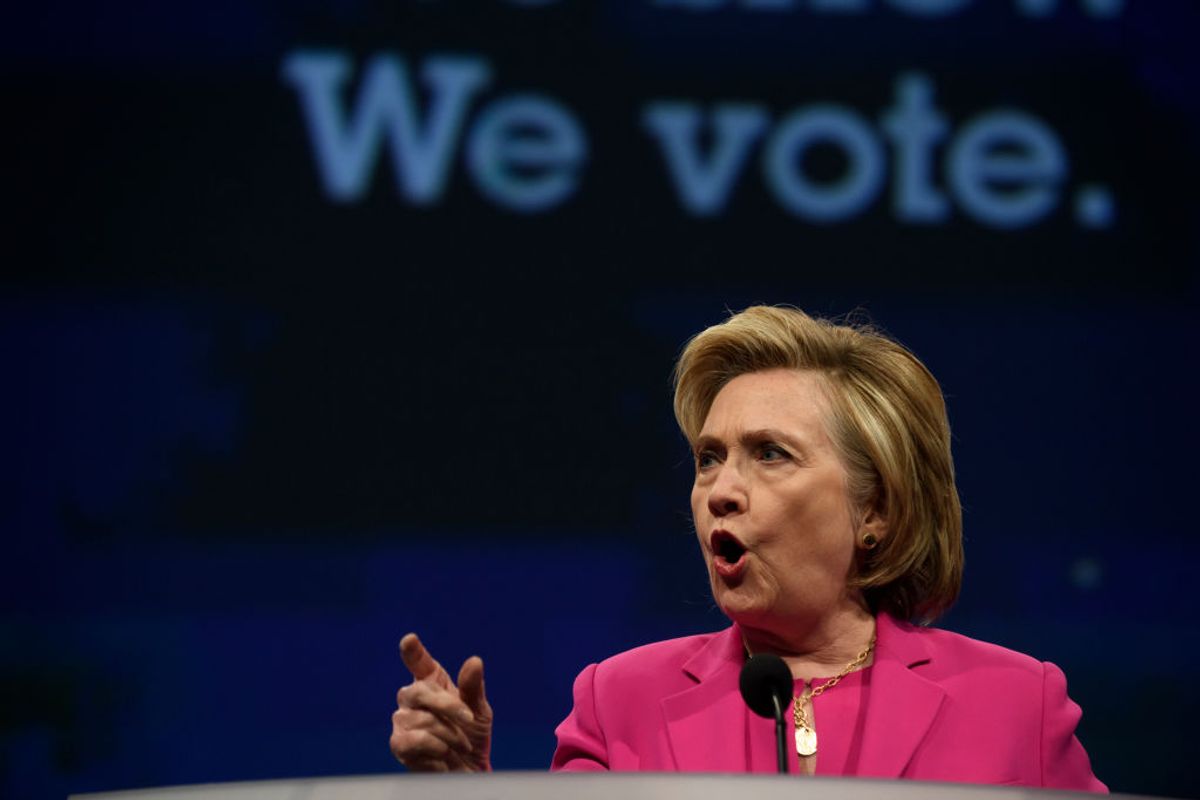 U.S. presidential candidates Sens. Bernie Sanders and Elizabeth Warren got into a fight this week. Warren reported that Sanders had, in a 2018 meeting, told her that he didn’t believe a woman could win over President Trump in the 2020 election. Sanders denied he said it.

But the two raised a question that many Americans may have asked. Can a woman win the upcoming presidential election?

Three women remain out of an original six in the Democratic primary for president: Sens. Warren and Amy Klobuchar and Rep. Tulsi Gabbard.

They may face a harder road than the men in the race. Research on candidates has shown that women encounter a number of obstacles in a political campaign.

In a recent experiment, Dr. Meredith Meyer, associate professor of psychology at Otterbein University, and I showed that women candidates are better off focusing on so-called feminine issues regardless of the voter’s beliefs about gender.

“People often form negative attitudes against those who deviate from gender norms,” we concluded. “Female candidates who tend to focus on issues stereotypically thought of as feminine are generally more positively evaluated than those who focus on stereotypically masculine domains.”

This means that even though presidential candidate Elizabeth Warren enjoys widespread favorability among Democratic primary voters, they may be reluctant to vote for her. Defeating President Donald Trump is an important concern for these voters. As much as they might like Warren, they may prefer what they think is a safer bet for the general election.

But a man isn’t necessarily a safer bet than a woman.

There are missing pieces in political scientists’ understanding of female presidential candidates that limit our ability to make confident statements about gender and electability.

If the Democrats nominate a woman, that woman will undoubtedly face challenges arising from sexism and gender stereotypes.

But the same thing would be true about any woman entering any male-dominated profession. Saying sexism exists isn’t much of a prediction.

There is much uncertainty about how gender would affect the viability of a female presidential candidate. It’s still not clear which Democrat actually has the best chance of winning in 2020, and it’s actually not clear that gender matters much. 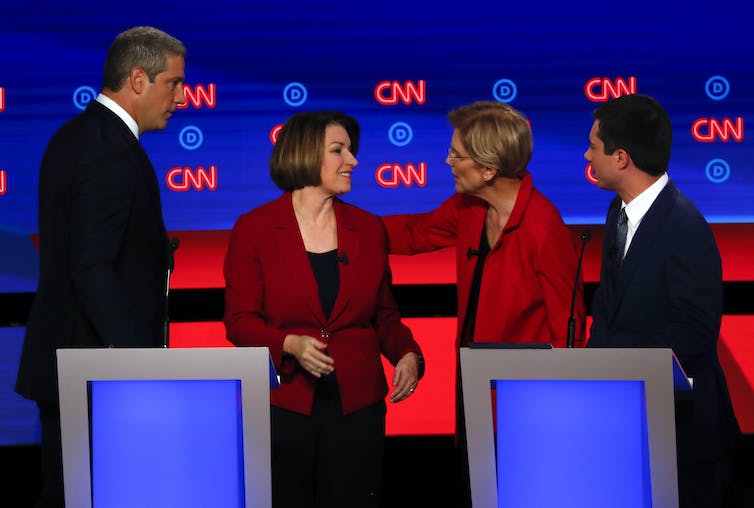 Political scientists study campaigns to see how various circumstances might affect the outcome of an election.

For example, a researcher might want to know the best way to encourage people to vote. To answer this kind of question, a researcher will look across multiple races, measuring a wide variety of factors. Comparing and contrasting similar and dissimilar factors in candidates, messaging and other aspects of campaigns allows researchers to create statistical models about what factors matter in a campaign.

Scholars then take those findings and make predictions about similar campaigns. Congressional races are especially useful for this task because there are 435 races every two years, which means we can collect data on a large sample of candidates and campaigns within a tight time period.

But it is difficult to be certain about what matters in presidential elections because they are so unusual. Presidential campaigns are very different from other kinds of campaigns. Voters and media pay far more attention, and this attention can alter the campaign effects.

This means that research on congressional campaigns doesn’t necessarily apply to presidential campaigns.

Political scientists can try to generalize by looking at presidential elections on their own, but this becomes a problem because there are so few of them, and politics – voters, campaign techniques, life, the universe in general – have changed over time. Collecting data during a campaign can tell you what happened in the last presidential election, but that doesn’t necessarily tell about future campaigns.

Put simply: The 1952 Eisenhower v. Stevenson campaign does not tell us much about the 2020 presidential election.

Obviously, it is even more difficult to have a general understanding of how gender affects presidential candidates.

It is difficult to make scientific statements that can be generalized to a larger group, let alone predictions about future events, when you start with a sample size of one. In practice, much of the research about “female presidential candidates” is research about Hillary Clinton.

Researchers are left asking how much of voters’ response to Clinton was due to her gender and how much of it was due to her as an individual. There is little doubt sexism played a role: Research suggests that sexism motivated some voters on President Trump’s behalf in the 2016 election.

But did Hillary Clinton’s gender alone guarantee that sexism would be a mobilizing factor in 2016? Did her unique personal history encourage more sexism, or did the public’s familiarity with her actually decrease the importance of sexism relative to her own personal conduct and reputation?

Is it even possible to separate sexism from evaluations of Hillary Clinton?

Scholars don’t know the answer to these questions because they have no one to compare with Clinton.

Adding to scholars’ confusion is that the 2020 Democratic nominee will likely face President Trump, who is also a unique kind of candidate.

In their work on the 2016 election, scholars Nicholas A. Valentino, Carly Wayne and Marzia Oceno find that sexism and anger combined to mobilize turnout on President Trump’s behalf in 2016. However, they point out that there is really no way to disentangle how much of sexism’s mobilizing effect was due to Clinton, and how much may have been due to the president’s own sexist behavior and campaign rhetoric.

Research indicates that some respondents felt their national identity was tied to stereotypical masculine traits and worried that Americans were becoming too soft and feminine. These so-called “gendered nationalist” voters responded favorably to Trump’s hyper-masculine rhetoric.

Since it is unlikely the president will alter his rhetoric in the 2020 campaign, it seems fair to assume he will do well with these voters again. Sexism could still be a mobilizing force for Trump voters regardless of whether or not the Democrats nominate a woman. 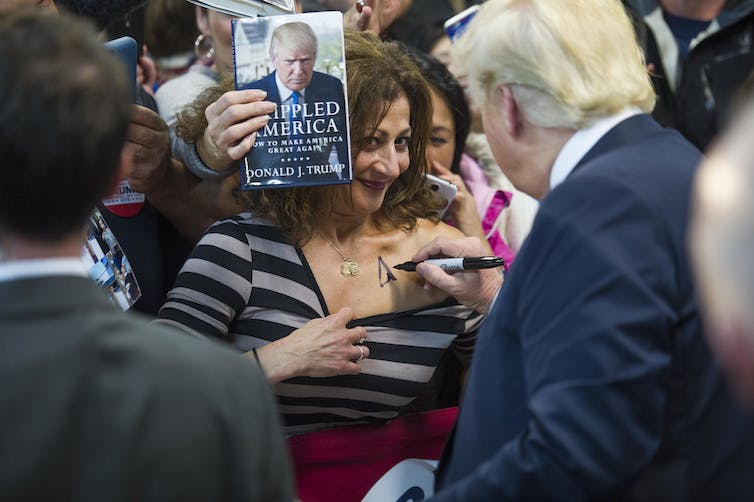 Trump autographing a woman’s chest after a campaign rally in 2015. Sexism could be a motivating factor in Trump’s favor in the 2020 election.
AP/Cliff Owen

Research on female candidates often looks at views rather than votes.

This approach works well if you are thinking about how candidates might fare in a primary election where policy differences between candidates may be less important than voters’ feelings about the candidates.

Kathleen Dolan’s work on female congressional candidates shows that party identity seems to carry more weight with voters than gender identity. While her work focused on congressional elections, it suggests that Democrats who may prefer a man to a woman will still vote for a female Democrat, any female Democrat, rather than Republican President Trump.

But mostly, researchers are left with speculation in this area.

Maybe voters won’t be as willing to volunteer or donate money for a female candidate. Maybe media coverage for a woman would be different than it would be for a man, which could have some indirect effect on voters. You could even speculate that a female president would face unique obstacles to her policy agenda due to gender stereotypes.

But we don’t really know.

This is an updated version of an article originally published on Jan. 7, 2020.