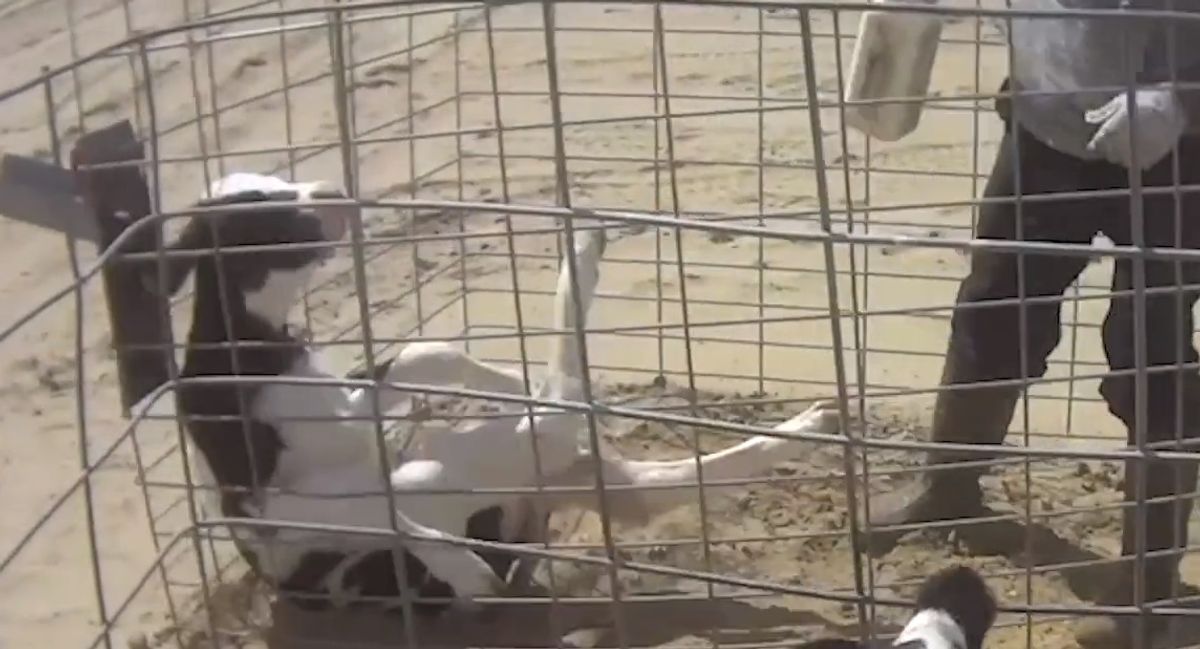 ARM described the background of the video as follows:

Fair Oaks Farms is one of the largest dairies in the U.S. and produces dairy products for the Fairlife milk brand - which is produced, marketed and distributed by the Coca-Cola Corporation.

Undercover investigators for Animal Recovery Mission (ARM) have confirmed that male calves from Fair Oaks Farms are in fact transported to veal farms (Midwest Veal and Calf Start), despite the corporation's claims that it does not send its male calves to veal farms.

The following abuses were witnessed on virtually a daily basis:

Employees were observed slapping, kicking, punching, pushing, throwing and slamming calves; calves were stabbed and beaten with steel rebars, hit in the mouth and face with hard plastic milking bottles, kneed in the spine, burned in the face with hot branding irons, subjected to extreme temperatures, provided with improper nutrition, and denied medical attention. This resulted in extreme pain and suffering by the calves, and in some cases permanent injury and even death.

In addition, the ARM investigator captured footage of drug use and illegal marijuana cultivation by Fair Oaks employees and supervisors.

Animal Recovery Mission calls on the Coca-Cola Corporation, which claims to have a progressive stance on animal welfare, to end their relationship with Fairlife Corporation and cut their ties with the veal industry.

Shortly afterwards, Fair Oaks Founder Mike McCloskey issued a statement via Facebook confirming that the video was indeed shot at Fair Oaks Farm and declaring that he was "disgusted" by what it depicted and took "full responsibility for the actions seen in the footage."

McCloskey pledged that "A full investigation of all aspects of the video is underway, during and after which disciplinary action will be taken, including termination and criminal prosecution, of any and all employees and managers who have violated either our animal care practices or the law or both":

This morning I was made aware of an animal abuse video that the group Animal Recovery Mission (ARM) produced and has released to the public and the press. Most of the footage for this video was captured on one of the dairies that belongs to Fair Oaks Farms. While we were made aware a couple months ago of the fact that ARM had gone undercover at Fair Oaks Farms, and had proactively made a statement (link), we had no idea what kind of footage had been captured or what – if any – abuse had occurred.

It is with great disappointment to find, after closely reviewing the released ARM video, that there were five individuals committing multiple instances of animal cruelty and despicable judgement. Of the five, four were our employees and one was a 3rd party truck driver who was picking up calves. Of the four who were our employees, three had already been terminated prior to us being made aware months ago of the undercover ARM operation, as they were identified by their co-workers as being abusive of our animals and reported to management. So, in this instance our policy of cow care training - “see something, say something” - worked. After reviewing the video frame-by-frame, those three employees are responsible for the overwhelming majority of offenses seen in this video.

Unfortunately, the fourth employee’s animal abuse was not caught at that same time. Although he underwent another training session in animal care when we discovered there was an undercover ARM operation on our farm, after viewing the extent of his animal abuse, he is being terminated today.

As to the individual who worked for the transportation company, today, we will notify the company that he works for and he will not be allowed on our farms again. It is our position that any companies that come in contact with transportation of our animals, should be well-versed in and adhere to our industry’s animal welfare practices which can be found in FARM (https://nationaldairyfarm.com).

Months ago, when I first learned of the undercover activity, I requested a 3rd party review and we went through a re-training process throughout the dairies. While the review came back favorable, I am not letting my guard down and will institute more thorough monitoring and training so that this abuse can never happen again. This video and any future videos will be immediately handed over to the authorities for review and potential prosecution.

Regardless, I am disgusted by and take full responsibility for the actions seen in the footage, as it goes against everything that we stand for in regards to responsible cow care and comfort. The employees featured in the video exercised a complete and total disregard for the documented training that all employees go through to ensure the comfort, safety and well-being of our animals.

It is a shock and an eye-opener for us to discover that under our watch, we had employees who showed disregard for our animals, our processes and for the rule of law. This ARM video shines a light on an area that – despite our thorough training, employee onboarding procedures and overall commitment to animal welfare – needs improvement. However, as I have stated before, the fact that ARM takes months before notifying owners or authorities regarding on-going animal abuse is concerning. I have personally reached out to ARM’s founder, Richard Couto, to discuss a more symbiotic relationship but he has yet to reach back.

A full investigation of all aspects of the video is underway, during and after which disciplinary action will be taken, including termination and criminal prosecution, of any and all employees and managers who have violated either our animal care practices or the law or both.

The statement that we grow and sell drugs on our farms is false. The plants featured in the video are an invasive perennial species that is rampant on farms all over the midwest. With that said, I am disappointed to learn of potential drug use on our properties. Months ago, the individual seen smoking by the barn and doing drugs in a truck was turned in by his co-workers to one of our managers. That manager notified local law enforcement about the drug use and, accordingly, a police report is on file.

It is with a heavy heart that I prepare this statement today. As a veterinarian whose life and work is dedicated to the care, comfort and safety of all animals, this has affected me deeply. I am disappointed for not being aware of this kind of awful treatment occurring and I take full responsibility for what has happened. I also take full responsibility to correct and ensure that every employee understands, embraces and practices the core values on which our organization stands.

I am and will continue to be deeply involved in the resolution of this matter, down to every one of our employees, so that I can guarantee that these actions never again occur on any of our farms.

Please feel free to contact me at pr@fofarms.com if you have any comments or questions.

A following day, Fair Oaks posted a statement on their web site outlining the "immediate action" they said they had taken "to address the situation at Fair Oaks Farms," along with a video response from Mike McCloskey:

We have taken immediate action to address the situation at Fair Oaks Farms and to protect animals at all supplying farms, including:

Suspended Deliveries – Immediately upon learning of the situation, we suspended all milk deliveries from Fair Oaks Farms. Until new assurances are in place, no milk from the dairy in the video will be included in fairlife, LLC products.

Training – We are increasing our investment in robust animal welfare training and support programs for all supplying farms to ensure consistent policy awareness and adherence, including annual re-certification requirements.

Audit Frequency – We have significantly increased the number of animal welfare audits we require for suppliers to 24 audits per year, all of which will be unannounced.

Enforcement – We are demanding our supplying farms institute a zero-tolerance policy for animal abuse. Individuals who violate this policy must be terminated and referred to law enforcement for further investigation.

In this case, Fair Oaks Farms has terminated the individuals who did not adhere to the farm’s practices. They are cooperating with law enforcement officers, and we will continue to hold anyone associated with this issue responsible for their actions.

As the Indianapolis Star noted, Fair Oaks Farm has been called the "Disneyland of agricultural tourism" and welcomes 600,000 visitors per year from school groups, families, and other guests who visit its museum, dine in its restaurant, and watch cows being milked in the glass-enclosed assembly line. But the ARM "tarnishes that clean, tourist-friendly image" as "it shows Fair Oaks Farm workers beating calves with metal bars, burning them with branding irons and throwing them into huts and trucks."

According to the Star, local law enforcement has also begun investigating the issue of animal treatment at Fair Oaks:

Newton County Sheriff Tom VanVleet said his office has requested the names of the people shown in the video.

"We acknowledge the need for humane treatment of animals and the need to hold individuals that have gone beyond an acceptable farm management practice accountable for their actions," VanVleet said in a statement.

"We have requested the names and identifiers of those terminated for animal cruelty by Fair Oaks Dairy Farms," VanVleet said.

"We will also be seeking the identity of the witness to the alleged crimes that failed to report this activity for some time."