The "bake sale" offered different prices for different ethnicities and for females in a parody of affirmative action. The event was criticized as being prejudiced. 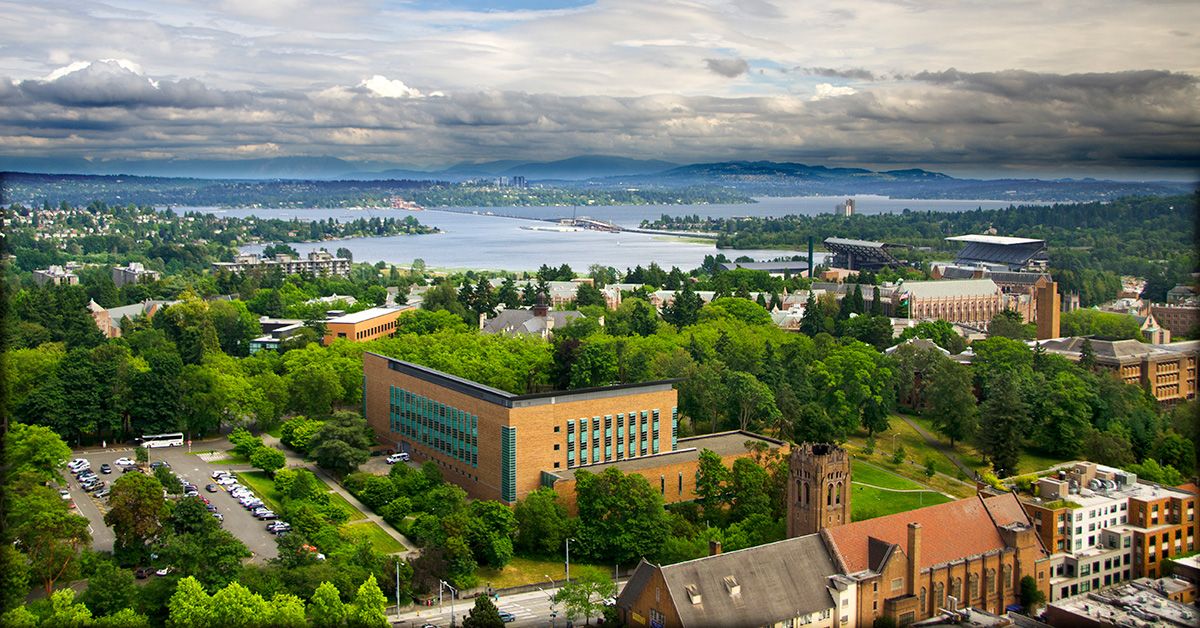 Aerial view of the University of Washington and surroundings. (Mitch Diamond/Getty Images)

The University of Washington College Republicans (UWCR) held an "affirmative action bake sale" on 3 May 2019 in which the price for cookies was based on the ethnicity and gender of the purchaser in what organizers called a "parody" of  affirmative-action policies. The event drew a backlash on UW's Seattle campus and generated widespread local media coverage. The event also drew attention to UWCR's history of hosting events that attract extremists to the university's campus with violent consequences.

In January 2017, a 34-year-old man was shot in the abdomen while protesting a speech by hate troll Milo Yiannopoulos at Kane Hall in an event that UWCR hosted. Not only was the victim critically wounded, but taxpayers were left with a $75,000 bill for the police response to the incident.

UWCR's President Chevy Swanson told us the group's leadership has since changed, and that under his watch, UWCR has worked with police and prioritized safety. But in February 2018, yet more violence erupted on campus when UWCR (this time under Swanson's leadership) invited Patriot Prayer, a far-right group with a track record for provoking street violence, to the UW campus. Five people were arrested, and police had to deploy pepper spray in that incident.

That event was attended by members of the anti-Muslim groups Proud Boys and Cascade Legion, as well as James Allsup, a member of the white-supremacist group Identity Evropa, which also marched in the deadly white-supremacist rally in Charlottesville, Virginia, in 2017. Allsup was elected to a local Washington state precinct as a Republican briefly before the party stripped him of that office.

UWCR sued the university for attempting to bill the group $17,000 for a security fee for the Patriot Prayer rally. The university settled the lawsuit by agreeing to pay UWCR's legal expenses and waive the security fee.

Carla Hill, a senior investigative researcher for ADL's Center on Extremism, said the problem with events like the "affirmative action bake sale" is the potential to attract extremist-minded people to them.

"A regular, good person would not be interested in a cookie-sale based on ethnicity or race, and you have to think that would draw more extreme people to them," Hill told us. She described the event as inappropriate. "To have something like that on a campus is not inclusive, and that’s what we all should be striving for on our campuses and in our communities. You can make your points in better ways."

The UW believes that college campuses are – and should be – places where difficult ideas are debated. Challenging assumptions and exploring new ideas are part of our mission. In the overwhelming majority of instances, freedom of speech and safety are not in conflict. In the rare instances where individuals chose to use their constitutionally protected rights to express ideas that others may find offensive, the University will take reasonable measures to protect the rights of speakers and protesters, while ensuring the safety of the campus community.

Balta continued: "We evaluate each event that takes place on campus individually. UWPD [UW Police Department], in conjunction with the host group and others, assess each event and implements safety measures commensurate with the level of potential disruption that may occur. Hosting groups generally are not held responsible for the actions of others who may show up with the intent of disrupting their events."

Only under "the most extreme and unusual circumstances, when a credible threat cannot be mitigated by other reasonable measures, would we consider cancelling an event," he added.

The university urged people to stay away from the Patriot Prayer event in 2018, but the event was allowed to move forward despite "credible" information of potential violence. That was because police said if the event was cancelled, the groups would likely come to campus anyway.

Swanson told us the bake sale's pricing was parodying affirmative action, a policy in which colleges and universities can consider race in admissions to redress societal inequality resulting from institutional racism. More specifically, Swanson claimed his group held the bake sale in response to Washington state lawmakers' recent move to allow public colleges and universities to consider race when making admission decisions, reversing a 20-year ban on the policy.

Affirmative action became prominent after the civil-rights movement and is an effort to level the economic playing field by giving groups that have been historically denied access an opportunity at higher education. But it's also controversial. Even as opponents hope to defeat the practice with a lawsuit against Harvard that could end up before the U. S. Supreme Court, supporters of affirmative action point to legacy admissions and the recent celebrity college-admissions scandal as evidence of persistent cycles of privilege begetting privilege.

Kristen Clarke, director of the National Lawyers’ Committee for Civil Rights Under Law, told us the UWCR bake sale comes at a time of "unprecedented attacks on race-conscious college admissions," while the event's racially inflammatory tone coincides with a rise in hate crimes and extremism nationally.

"We want healthy, diverse learning environments that equip students for the diverse world they will move on to after they graduate. At the end of the day, diversity is a bedrock principle of American democracy," she told us.

Clarke criticized UW administrators for allowing the event to move forward on campuses, stating, "You can see how intensely polarizing this was. The school has a responsibility and role to play in ensuring that they are promoting a safe learning environment in which all students feel valued."

Swanson told us the pricing of cookies was not intended to be mathematically in line with the reality of how affirmative action plays out on college campuses in terms of how demographic groups are represented as a result. In fact, he said UWCR replicated the event from one held at the University of Texas, Austin, in 2016. The pricing, he said, was meant to be a "parody" by burdening some students more than others based on their race and gender.

But no one was laughing.

The Stranger, a Seattle alternative weekly, reported that protesters shouted at Swanson's group, "The people who agree with you are white-power supporters, what does that say?” An African-American custodian at Harborview Medical Center was quoted describing the event as "blatant, blatant, blatant racism when you take a sign like this and you put prices on it and you’re valuing what people are."

"The students knew well what kind of reaction this would invoke," Clarke told us. "It feels like the administrators on campus are missing at the wheel here."

Swanson said describing the event as racist was to be "purposefully ignorant" of what he claimed was its goal, which was to effect change to affirmative-action policy. When asked if his group could have addressed the issue another way, Swanson responded, "There’s a different way to do everything. For example, we could have done an informational seminar. We don't know what attendance would have looked like or what people would have taken away from that."

Michele Andrasik, assistant professor in UW's School of Global Health, told us that "given the history of these types of things [attaching a monetary value to human beings], it’s hard for me to imagine that that group was using it for anything other than what it has been used for historically."

"It’s demeaning. I felt that what they were putting on the sign was very clear. I don’t think you had to read much into it," Andrasik told us.

In response to the bake sale, the statewide umbrella organization, the Washington College Republican Federation (WCRF), declared that it didn't sanction the event and noted that it "condemns racism and hate in all its forms," and while "all who believe in our values are welcome in the big tent Party — bigotry is not."

Swanson told us that although his group used to be affiliated with the Federation, the two groups parted ways more than a year ago. One day before the bake sale, WCRF Chairman Jack Pickett sent Swanson a letter saying the bake sale violated an agreement between the two organizations that stipulated UWCR wouldn't act in a manner that reflected poorly on WCRF, other college-Republican organizations, and the Republican Party at large. "Your event would be a clear breech of this term," the letter read.

Pickett's letter also stated that if the bake sale went forward, the Federation would file a complaint with the university's Student Activities Office and reminded UWCR that in January, WCRF had agreed not to challenge UWCR's recognition as a registered campus organization provided it met the terms of its agreement with the Federation.

Not only did UWCR move forward with the bake sale, but it posted Pickett's letter to UWCR's Facebook page, taunting the Federation as "weak Republicans" for not supporting the sale.

Pickett declined to answer questions about the details in the letter.

Such bake sales are old, race-baiting stunts that probably keep happening because they offer guaranteed outrage and press coverage. The earliest news report we could find documenting one such event was in 2003. Historically, such events have been held by campus conservative or Republican clubs, and would often result in reporters documenting angry reactions from bystanders and protests.

But a 2012 bake sale at Towson University in Maryland had ominous portents of future events. At that time, the "White Student Union" that was planning the event was led by Matthew Heinbauch, a neo-Nazi who participated in the white-supremacist rally in Charlottesville.

Despite the bake sale at UW, Andrasik said, she felt heartened by the support for diversity on display on campus that day.

"There were so many white men and women with signs showing their support [for diversity]. People who came to sit with us were of all different identities," Andrasik told us. "I was looking in the news for that story, and was hoping to see it. But I didn't."

She said she saw white, male students troll the anti-affirmative-action event by hawking free "anti-racist doughnuts." Meantime, a scheduled First Nations potlatch held the same day raised $10,000-plus in donations to benefit organizations addressing missing and murdered Native American women, according to Owen Oliver, coastal chair of First Nations at UW. Oliver declined to comment on the UWCR bake sale and instead urged readers to learn about the issue of missing and murdered indigenous women, an ongoing crisis.

Andrasik said, "It really made me feel good and I left on Friday feeling a sense of hope on the issue instead of this sense of despair that these people were trying to demean and demoralize us. At the end of the day it was really great."

The Guardian. "Couple Charged in Shooting of Protester at Milo Yiannopoulos Event in Seattle."   25 April 2017.

Nelson, Sean. "UW Republicans to Protestors After Shooting: 'It's Time Your Flame is Put Out.'"   The Stranger. 25 January 2017.