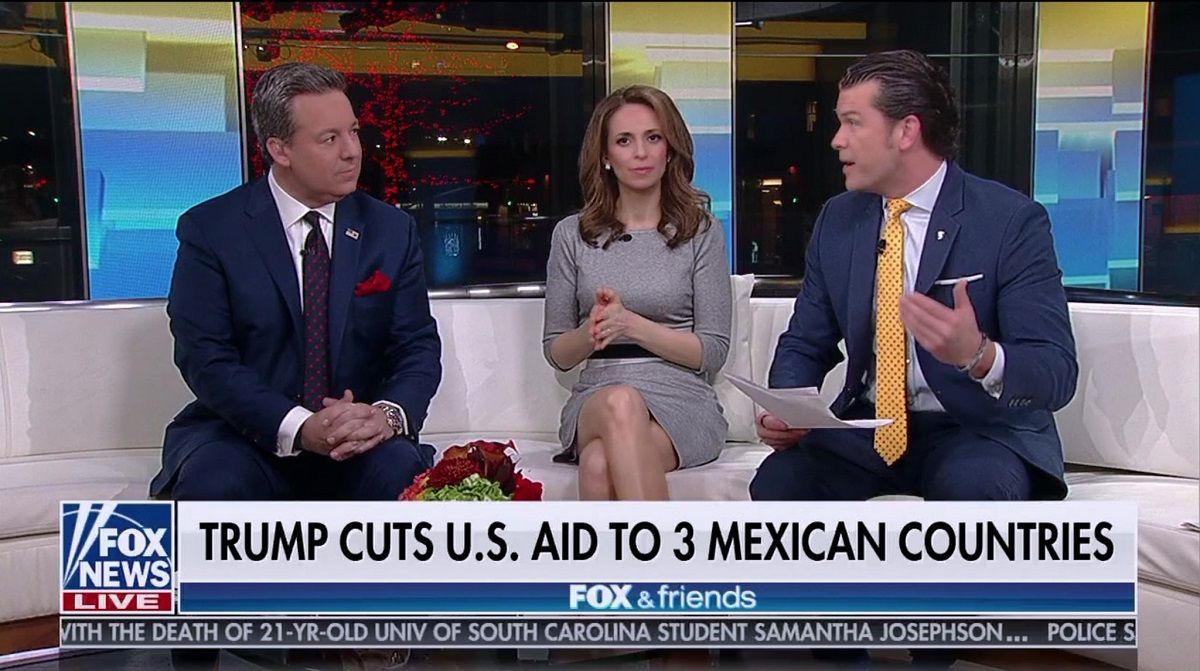 On 29 March 2019, President Donald Trump announced his intention for the U.S. to cut off aid to the three Central American countries that comprise the "Northern Triangle" -- El Salvador, Guatemala, and Honduras -- because those countries had not done enough to mitigate the humanitarian crisis at the southern U.S. border.

Two days later, acting White House chief of staff Mick Mulvaney told CNN's Jake Tapper on "State of the Union" that the cutoff of aid was justified because "Honduras could do more. Nicaragua could do more. El Salvador could do more." Mulvaney added, "And if we're going to give these countries hundreds of millions of dollars, we would like them to do more."

The same day as Mulvaney's "State of the Union" appearance, the Fox News Channel's "Fox & Friends Weekend" program discussed the subject while displaying a graphic stating that Trump was cutting off aid to "3 Mexican Countries," a gaffe that drew widespread derision on social media:

How Stupid Is @foxandfriends?

Plenty of other Twitter users jumped into the "Fox & Friends Weekend" fray to pile it on:

So unfair that Trump is punishing the other Mexican countries because of the actions of one bad Mexico https://t.co/X4QGUu34CT

so many Mexican countries to choose from https://t.co/k8AzfL1Q67

I guess we should thank God it’s only three Mexican countries. Amd not all of them. https://t.co/eG35Zq9Jm8

Despite the mistaken graphic, co-host Pete Hegseth did correctly identify the three countries affected by the Trump policy change while he was covering the subject live.

According to The Hill, "Fox & Friends Weekend" subsequently issued an on-air correction and apology, noting the graphic was "inaccurate" and that U.S. funding was being cut from "three Central American countries":

"Now we want to clarify and correct something that happened earlier in the show," co-host Ed Henry said later. "We had an inaccurate graphic on screen while talking about this very story. We just want to be clear, the funding is being cut off to the three Central American countries. We apologize for the error. It never should have happened."