Does This Cookware or Children’s Toy Contain Dangerous Levels of Lead?

Tamara Rubin, aka #LeadSafeMama, frequently finds high levels of lead in vintage cookware or other household products. What does that mean for you? 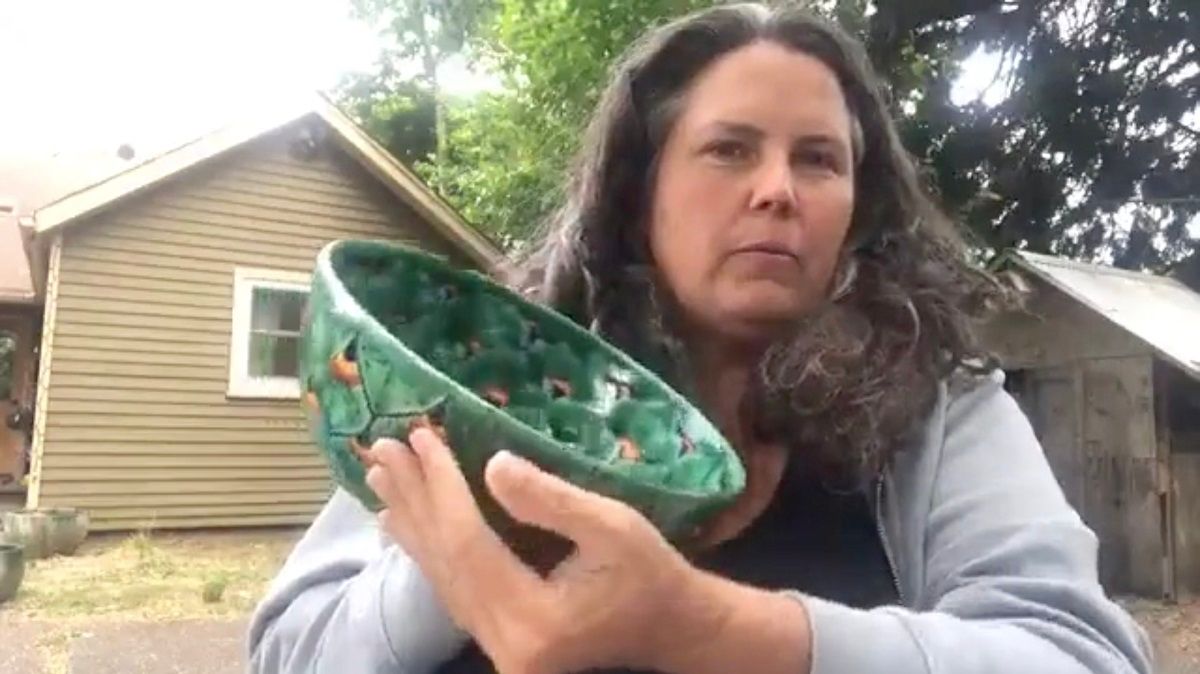 A frequently recurring item in Snopes’ inbox is the question “is this true?” combined with a link to a post by Tamara Rubin, the self-described “Lead Safe Mama.” Rubin has made a career out of testing household items for lead with the aim of raising awareness that lead exists in a variety of products which children, who are more prone to the effects of lead poisoning, could potentially come into contact with. Such items often include vintage cookware or toys created before the implementation of stronger lead regulations, as well as other household products.

On our website, we have previously covered Rubin’s findings as they relate to fidget spinners, vintage Pyrex brand cookware, and Walmart-vended jelly sandals. Here we provide a basic overview of Rubin’s methodology and explain why “is this true?” is an imperfect question to ask of her posts.

Rubin describes herself as a lead-poisoning prevention advocate, spurred into action by an incident involving her son and improper removal of lead paint, as explained on her website:

Tamara Rubin is an internationally recognized, award winning lead-poisoning prevention advocate and documentary ﬁlmmaker. She took on the cause of childhood lead-poisoning when her own sons were poisoned by the work of a painting contractor in 2005.

Since then Tamara has created a strong web and media presence for the cause of lead-poisoning prevention, in an effort to bring this message to the world: lead poisoning was not “solved” with the 1978 ban on lead in residential paint. She is committed to educating every parent about this wholly preventable environmental illness that causes permanent brain damage in young children yet still today conservatively costs the United States more than $50.9 Billion annually!

From 2011 to 2016 she ran the nonprofit Lead Safe America Foundation, but in 2016 she was ousted from the board of that organization following allegations of mishandled funds, and an investigation into Lead Safe America remains active as of May 2018. Rubin now funds her work primarily via GoFundMe campaigns and has branded herself the “Lead Safe Mama.”

How Robust Are Rubin’s Methods?

Rubin says she is certified on a device known as a handheld XRF, or X-ray fluorescence spectrometer. Such a machine is used extensively in a variety of scientific disciplines and can provide a basic assessment of the chemical composition of an object by exciting the object’s molecules with X-rays and seeing what secondary X-rays are emitted, according to Thermo Fisher:

XRF analyzers determine the chemistry of a sample by measuring the fluorescent (or secondary) X-ray emitted from a sample when it is excited by a primary X-ray source. Each of the elements present in a sample produces a set of characteristic fluorescent X-rays ("a fingerprint") that is unique for that specific element, which is why XRF spectroscopy is an excellent technology for qualitative and quantitative analysis of material composition.

Experts agree that this method is a valid first approach for the detection of lead in a sample. A 2013 study performed by researchers at the California Department of Public Health Childhood Lead Poisoning Prevention Branch suggests that XRF “is an effective screening method for food and similar items with lead content > or = 10 ppm [parts per million], provided the operator is trained to identify lead spectra.”

We reached out to an expert via email: Howard Mielke, a professor of Pharmacology at Tulane’s School of Medicine, who heads a research unit into lead contamination and once served alongside Rubin as a board member for Lead Safe America. We asked him if XRF was a valid method for Rubin’s purposes, and he told us that it was, but only as a first step. The second and more expensive step involves seeing how much if any of that lead is capable of being transferred to a child: "The use of the XRF is suitable as a first step in determining lead in an object. The second step involves evaluating whether or not the lead is readily picked up on hands or ingestible through the use of the object. The second step is the expensive step but it provides information critical to understanding the possibility of lead poisoning from the object."

This qualification was also made in a paper regularly cited by Rubin, “Hazardous Metals in Vintage Plastic Toys Measured by a Handheld X-ray Fluorescence Spectrometer”, which concluded that "Additional research is needed to determine how much heavy metal from a given toy will migrate onto a child’s skin or be ingested during mouthing. Future work should therefore include tests that simulate handling and mouthing of the tested toys."

Why Is Lead Present in Various Products?

Since 1978, the U.S. Consumer Safety Protection Commission (CPSC) has banned “lead content of over 0.06 percent in paints and coatings to which children have access and that no feasible consumer product safety standard under the CPSA would adequately protect the public from this risk. The 0.06 percent is reduced to 0.009 percent effective August 14, 2009.” This law also explicitly bans “toys and other articles intended for use by children that bear ‘lead-containing paint’ and “furniture articles for consumer use that bear ‘lead-containing paint.’” The most common source of lead in such objects is almost always metal-based pigments used as colorants, as described in a 2015 review:

The metals are almost certainly colorants or pigments. Lead chromate, PbCrO4, also known as chrome yellow, was a standard plastic colorant in the era in which [vintage, non-vinyl] toys were made. Lead sulfate (PbSO4) and lead oxide (PbO) were mixed with the chromate in varying amounts to produce a color palette from light yellow to red. Similarly, cadmium compounds such as cadmium sulfide and cadmium selenide were— and still are—used to produce yellow and orange hues in plastics. Mercury cadmium sulfides were also used to produce colors from orange to maroon.

Much of the lead Rubin identifies comes from vintage items that predate a ban on these colorants. A recent viral post concerned the detection of lead and other toxicants in “vintage Tupperware (c. 1970s)”:

Tamara Rubin, of Lead Safe Mama, LLC tested vintage Tupperware (c. 1970s) and found high levels of toxicants -- including Mercury, Cadmium, Lead, and Arsenic -- at levels and presence that varied with product color. The levels of toxicants found in these products are significantly higher than what would be currently allowed (in newly-made products intended for use by children today). Lead (Pb) levels found were found to be as high as 2,780 parts per million (ppm), Mercury (Hg) levels were found to be as high as 1,058 ppm and Cadmium (Cd) levels were as high as 3,380 ppm

It is not only pre-1978 products that Rubin finds lead in. Another popular post of Rubin’s found lead in the children’s “fidget spinner” toys, but in that case manufacturers of the offending spinner defended their product by saying it was not intended for children and therefore did not fall under the purview of the CPSC, according to CBS News:

When [U.S Public Interest Research Group, who worked with Rubin on fidget spinners] contacted Target and asked them to take the product off the shelves, Target declined, saying the two products are not designed for children. According to the packaging, they are marked for ages 14 and up, and Target says, "They are not defined by the Consumer Product Safety Commission as toys" and as a result "are not required to meet children's product standards."

The toy's manufacturer, Bulls-i-Toy, similarly stated in a letter to the safety group: "The products in question are clearly labeled 'ages 14+' ... there are no mandatory CPSC (Consumer Product Safety Commission) requirements for it."

A third potential way for lead to end up in post-1978 items is through the importation of lower quality, untested products manufactured outside of the United States. In April 2016, for example, “New York Attorney General Eric Schneiderman opened an investigation into how toys manufactured in China ended up for sale at retailers including Toys 'R' Us, Kmart and Target over the past few months,” stating that “some of the arts and crafts sets from the makers of Cra-Z-Art contained close to 10 times the amount allowed by federal child safety limits.”

A 2008 update to the Consumer Product Safety Act provided more robust tools to test and block imported toys that may contain lead, but the system is far from perfect.

The extremely narrow answer to the question “is it true that [X] contains dangerous levels of lead,” at least in response to a Rubin post, is almost certainly yes. Her methods are scientifically valid and accepted as a way to test for the presence of lead, and the products that she tests are often historically expected to contain lead. Such a question, however, neglects other important questions not addressed by Rubin’s analysis, such as:

As discussed earlier, an XRF analysis is incapable of determining risk of exposure to lead, just its presence within a product. Furthermore, in many cases Rubin’s analysis provides vague descriptions of the products tested. For example, whether the “vintage Tupperware (c. 1970s)” tested by Rubin is the same 1970s-era Tupperware you have in your home would be challenging to determine. Similarly, many companies produce fidget spinners, but the identification of lead in one brand of spinner does not necessarily indicate a widespread risk of lead contamination among all spinners.

Regardless, lead exposure is certainly a real risk for developing brains, and Rubin’s work highlights certain types of products that one can reasonably expect to have a higher risk of lead contamination.

Correction [22 March 2019]: An earlier version of this post abridged CRF §1303.1 in a way that misrepresented the law. This post has been updated to include the full text of the clause.