Did the Trump Administration Revoke a Journalist’s Award Because of Her Criticism of Trump?

The State Department withdrew an award they had given to Finnish investigative journalist Jessikka Aro, who has regularly criticized U.S President Donald Trump. 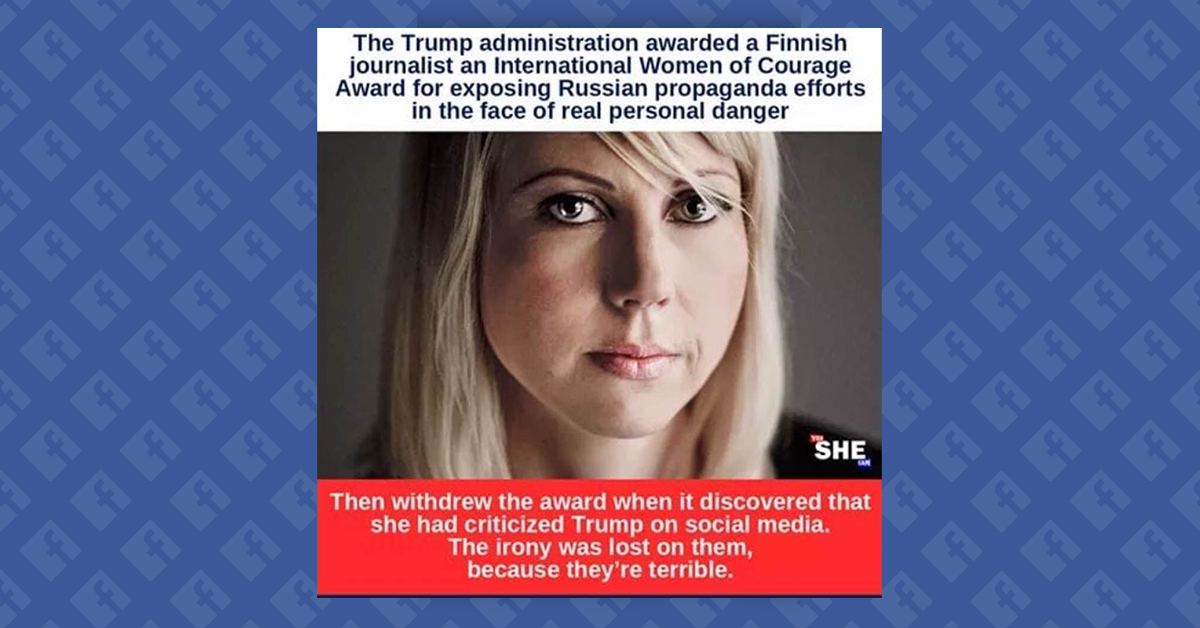 Jessikka Aro is a Finnish investigative journalist who in 2015 identified the physical location of the Russian troll farm known as the Internet Research Agency (IRA), an entity that was instrumental in driving divisive discourse in the run-up to the 2016 U.S. presidential election. Numerous IRA leaders have since been indicted as part of U.S. Special Counsel Robert Mueller's investigation into Russian election meddling.

According to a report in Foreign Policy magazine, the U.S. State Department in early 2019 notified Aro that she was a finalist to receive an International Women of Courage award, given by that department. The award recognizes “women around the globe who have demonstrated exceptional courage and leadership in advocating for peace, justice, human rights, gender equality, and women’s empowerment, often at great personal risk and sacrifice.” Later, according to anonymous diplomatic sources familiar with the decision, the State Department rescinded that offer over concerns that her social media presence was too overtly critical of President Donald Trump:

Jessikka Aro, a Finnish investigative journalist, has faced down death threats and harassment over her work exposing Russia’s propaganda machine long before the 2016 U.S. presidential elections. In January, the U.S. State Department took notice, telling Aro she would be honored with the prestigious International Women of Courage Award, to be presented in Washington by Secretary of State Mike Pompeo.

Weeks later, the State Department rescinded the award offer. A State Department spokesperson said it was due to a “regrettable error,” but Aro and U.S. officials familiar with the internal deliberations tell a different story. They say the department revoked her award after U.S. officials went through Aro’s social media posts and found she had also frequently criticized President Donald Trump.

The State Department contends that the rescinding of the award was related to a communication error. In a 7 March 2019 press briefing, Deputy State Department Spokesperson Robert Palladino claimed State had erred in notifying her of the award in the first place but refused to “speculate” on any political motive. He also did not explicitly deny that possibility:

MR PALLADINO: We incorrectly notified this individual that she had been selected as a finalist. This was an error. This was a mistake.

QUESTION: So she hadn't been selected as a finalist?

MR PALLADINO: She had not. We regret the error. And to be clear, we admire this journalist’s achievements as a journalist, and that was the basis of her nomination by Embassy Helsinki.

QUESTION: Okay. So the process here is that the embassy, wherever the person is – various embassies nominate people, it comes back here, these – the nominations are looked at and then you guys make a decision. Somehow, someone screwed up here and notified her that she had won, but she hadn't?

QUESTION: -- nothing to do with any social media commentary that is critical of the President or this administration?

MR PALLADINO: I’ve seen that speculation. I’m not going to be able to go further into weighing the merits of who was selected, whether one person had more merit versus the other. That’s internal. But I can say we regret the error and we’ve got to do better in that regard. I’ll leave it at that.

Sources close to that decision told Foreign Policy that politics played a clear and obvious role, describing her brief selection as creating a crisis internally:

“It created a shitstorm of getting her unceremoniously kicked off the list,” said one U.S. diplomatic source familiar with the internal deliberations. “I think it was absolutely the wrong decision on so many levels,” the source said. The decision “had nothing to do with her work.”

Despite allegations of political considerations, Foreign Policy reported that “there is no indication that the decision to revoke the award came from the Secretary of State or the White House,” suggesting instead that it was more likely that “the decision came from lower-level State Department officials wary of the optics of Pompeo granting an award to an outspoken critic of the Trump administration.” Aro agrees with the suggestion that her social media presence, which has indeed been regularly critical of Trump, played a role:

The Washington Post addressed the scandal as well in an 8 March 2019 editorial titled, “She Exposed Russian Trolling. Her Award for Her Work Was Rescinded After She Criticized Trump”, arguing that “Ms. Aro deserved the award. She should hold her head high for courage, unlike those who denied her the honor.”

Rep. Eliot L. Engel, a Democrat who serves as chairman of the House Committee on Foreign Affairs, also criticized the move:

It’s outrageous that the State Department rescinded its 'Women of Courage' award from Jessikka Aro, a journalist recognized by our Embassy in Finland for her courage in the face of intimidation while holding the powerful to account. That’s why I’m even more troubled by press accounts suggesting the Department revoked Aro's award because of her frequent criticism of President Trump. One of the hallmarks of America is our First Amendment right to freedom of speech, and it’s one of the core democratic principles the State Department promotes abroad. That the Department would rescind Aro’s award for the exercise of this right is truly shameful.

Washington Post.   "She Exposed Russian Trolling. Her Award for Her Work Was Rescinded After She Criticized Trump."     8 March 2019.