What’s the Deal With Those “Mysterious Fast Radio Bursts from Deep Space”?

Despite what you may have read on the internet, several explanations are more likely than aliens. 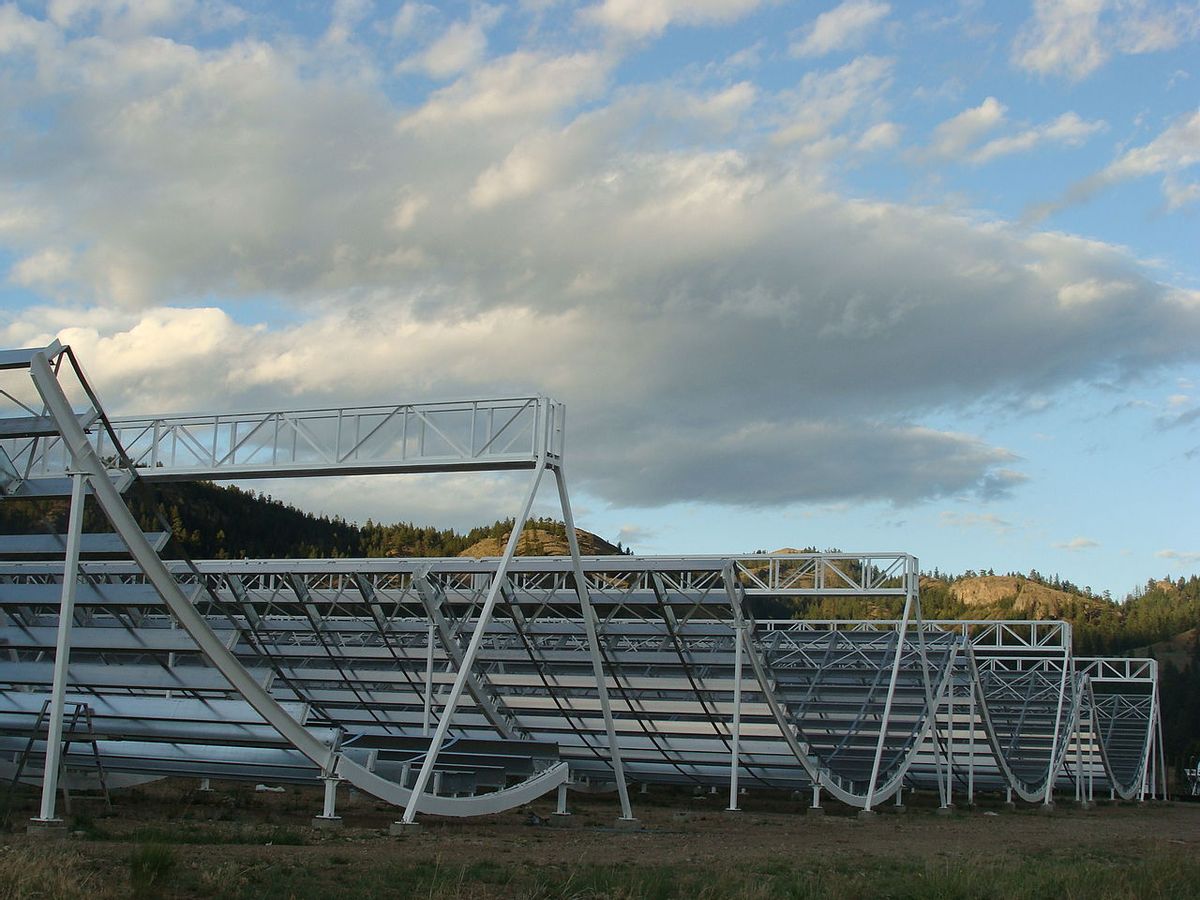 Image Via Mateus A. Fandiño - The CHIME collaboration

On 9 January 2019, a Canadian-led team of astronomers working with a radio telescope dubbed CHIME, published a study announcing the second recorded instance of a repeating “Fast Radio Burst,” or FRB. Though (non-repeating) FRBs have been known to science since 2007, the mechanisms that produce them largely remain a mystery. These millisecond-long bursts of electromagnetic radiation, necessarily produced by extremely high energy events, arrive at Earth from sources billions of light years away, where they are detected by large radio telescope arrays. Until recently, FRBs had exclusively been singular, transient events, which made them hard to study or understand with any depth or precision.

In 2016, however, the first ever repeating FRB was confirmed by a group of researchers working with the Very Large Array telescope in New Mexico. In that case, “FRB 121102” was detected first in 2012 and again from the area of sky in 2015. Because of its repeating nature, researchers were able to pinpoint the dwarf galaxy it came from, some 2.5 billion light years away. The more repeating FRBs scientists identify, the more likely it is that they will be able to understand their origins.

The CHIME discoveries, which included 12 non-repeating FRBs in addition to the second ever repeating one, were made prior to that telescope's even being fully operational. The authors argued that these findings may open up the possibility that repeating FRBs are a common feature of our universe. In their study, published in the scientific journal Nature, the authors concluded that "CHIME/FRB, with its wide field and high sensitivity, was predicted to find a large population of repeaters, if they exist. That one of our first 13 events repeats suggests there indeed exists a substantial population."

If you heard about this discovery from an outlet other than Nature, however, you may have gotten the impression that a leading hypothesis for the source of these radio bursts was some sort of alien technology:

Of course, anything “could be" aliens, but for such an argument to be noteworthy it would need to have been made with relevant evidence. The CHIME paper did not attempt to present such an argument and therefore provided no specific evidence in favor of any alien technology scenario. Instead, this paper offered evidence that the same narrow region of space emitted massive amounts of radio energy more than once.

Nearly all the outlets suggesting an alien mechanism connected to FRBs cited the same speculative statements of Harvard astronomer Avi Loeb. In 2017 (in a paper unrelated to the study currently being reported on), Loeb suggested a possible source of FRBs could be an alien civilization beaming radio waves for the purpose of propelling far away light sails, thin objects accelerated by solar radiation pressure. Loeb, it should be noted, was also the primary scientific voice fueling media reports that an object discovered passing through our solar system in late 2018, ‘Oumuamua, was an alien light sail.

Loeb has a strong interest in light sails. He the chair of an advisory committee for a project called Breakthrough Starshot, which aims to send a light sail to the star closest to our own sun. His analyses do not seek to demonstrate an alien mechanism for these varied FRB occurrences, merely to show that such scenarios are possible within our understanding of the physical laws of the universe, and could involve a light sail. Though fascinating, the subject is (from a science reporting standpoint) a distraction from the actual scientific progress made by the CHIME team.

CHIME, which stands for Canadian Hydrogen Intensity Mapping Experiment, was originally built to detect hydrogen radio emissions sourced from deep in our universe’s primordial past. The ability to discern extremely faint radio sources across a huge swatch of the sky, however, makes it a perfect tool to monitor for FRBs as well. It’s not that FRBs are rare: some estimates suggest one FRB occurs somewhere in the sky every eight seconds. It’s that the universe is quite large, and one needs to be constantly watching a massive area of sky to detect an FRB and, and an even larger amount to find an instance of a repeating one.

With the large amount of sky captured by the highly sensitive CHIME radio telescope, experts predicted that it would lead to the discovery of a much larger number of FRBs, and even repeating FRBs. Based on the initial results in Nature, their assumption appears to have been borne out. In a three-week period in August 2018, the CHIME telescope detected 13 FRBs, and one of them was a repeater. Speaking to The Guardian, CHIME astrophysicist and University of British Columbia professor Ingrid Stairs said, "Until now, there was only one known repeating FRB. Knowing that there is another suggests that there could be more out there. And with more repeaters and more sources available for study, we may be able to understand these cosmic puzzles -- where they’re from and what causes them."

West Virginia University astrophysicist Sarah Burke-Spolaor was part of the team that pinpointed the location of the first repeating FRB known to science, a faint dwarf galaxy some 2.5 billion light years away. That knowledge allowed the team a sense of the energy behind the event that produced the radio waves, as she described in Science News in January 2017: "For roughly five milliseconds, the burst outshined all the stars in its own galaxy and rivaled the luminosity of blazing disks of gas that swirl around supermassive black holes, said Burke-Spolaor, one of the researchers involved with the project."

Speaking to us by phone, Burke-Spolaor, who was not a part of the CHIME study, told us that “the two leading hypotheses [for what causes FRBs] right now, more or less, are some kind of black hole origin or some kind of neutron star origin.” Neutron stars are the collapsed cores of once giant stars that can emit beams electromagnetic radiation. “It would [have to] be a very extreme neutron star ... much more energetic than the ones that we see in our galaxy” to have radio waves propagate for billions of light-years, Burke-Spolaor said.

Some scientists, including members of the CHIME team, posit scenarios that involve a combination of neutron stars and supermassive black holes. This existence of a black hole is supported by the observation that the radio pulses making up most of the recently discovered FRBs are “scattered” in a way that betrays a high energy or “special” environment. Speaking to The Guardian, CHIME team member Cherry Ng explained "That could mean in some sort of dense clump like a supernova remnant or near the central black hole in a galaxy. But it has to be in some special place to give us all the scattering that we see."

Outside of being a scientific mystery that may one day be solved as more repeating FRBs are discovered by large area telescopes like CHIME, though, these FRBs could also be a tool to help us better understand the vast emptiness of our universe. In an 18 November 2018 comment in Nature Astronomy, Burke-Spolaor argued that FRBs provided science with a “rich dataset with which to probe” both the mechanisms that produce the bursts and the nature of the intergalactic medium that they travel through. “Gravitational waves, neutrinos and the full electromagnetic spectrum are now open for business,” she wrote.

“Until recently, there were more theories [about FRBs] than actual radio bursts,” Burke-Spolaor joked to us. With these early results from CHIME, that balance may be shifting.

Winick, Erin.   "Repeating Radio Bursts from Outside Our Galaxy Have Been Detected for the Second Time.”     MIT Technology Review.   9 January 2019.

Collins, Tim.   "Mysterious Repeating Radio Signals Have Reached Earth from a Galaxy 1.5 Billion Light Years Away (But Are They Evidence of Alien Civilisations?).”     Daily Mail.   9 January 2019.