The Daily Caller, a web site co-founded by Carlson, resurrected the issue in an interview with President Trump. 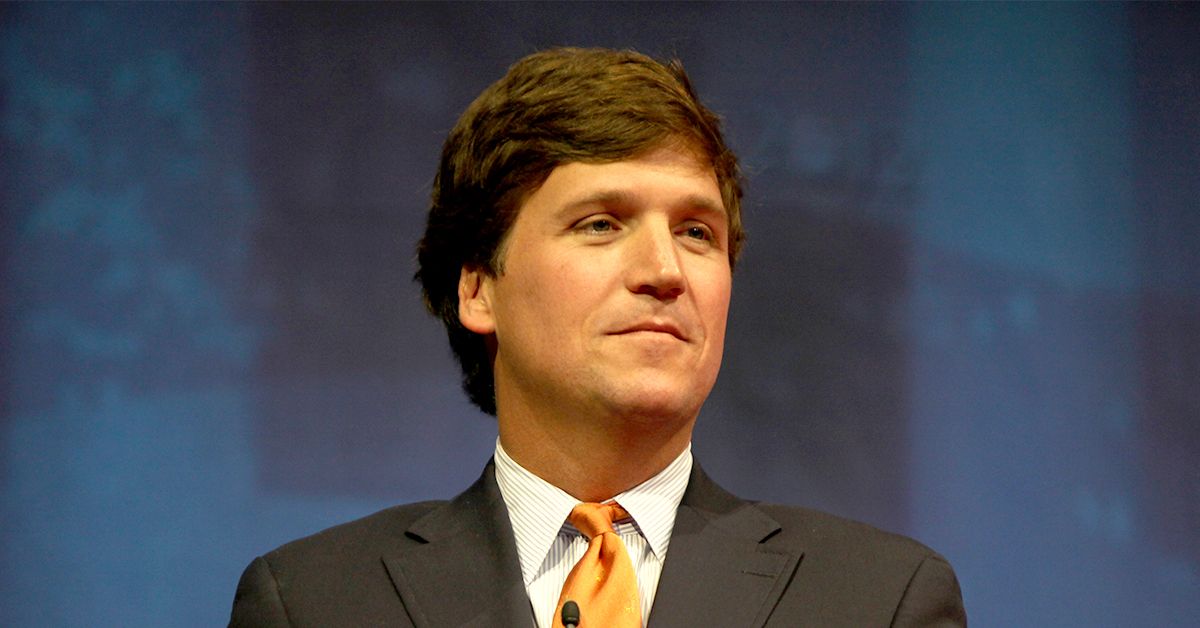 The accuracy of a claim by Fox News host Tucker Carlson that the front door to his home was damaged by protesters has been challenged, but that didn't stop it from reaching the highest levels of government.

Carlson's driveway was vandalized with graffiti during a 7 November 2018 protest outside his home in Washington, D.C., according to police. But after making comments to the news media about being "threatened" by a protester "throwing himself against the front door” and cracking it, no evidence of a damaged door has come to light. Nevertheless in an exclusive interview with President Donald Trump one week later, the right-wing Daily Caller web site co-founded by Carlson raised the cracked door matter unchallenged, prompting a rather bellicose response from the President:

THE DAILY CALLER: Tucker Carlson had his house attacked, he had a mob outside of his house while his wife was home. They cracked the door — what is this violence? Where does it come from? Do you have a message for Tucker and his family?

POTUS: I do, I spoke to Tucker and I think Tucker’s a great guy and I think it’s terrible, they were actually trying to break down the door.

THE DAILY CALLER: How do you think the police should handle Antifa, generally?

POTUS: These people, like the Antifa you’re talking about, the Antifa -- they better hope that the opposition to Antifa decides not to mobilize. Because if they do, they’re much tougher. Much stronger. Potentially much more violent. And Antifa’s going to be in big trouble. But so far they haven’t done that, and that’s a good thing.

A report provided to us by the Washington, D.C., Metropolitan Police Department (MPD) upon request made no mention of a damaged front door. According to the report, MPD officers encountered about 20 demonstrators gathered outside Carlson's home at about 6:35 p.m. after Carlson's wife had summoned them because she said she heard "banging and pounding" on the front door and spotted a large group outside, causing her to retreat to the rear of the house. Officers discovered signs left on parked cars in the driveway and at the front of the home making reference to political affiliation, according to the report, as well as the anarchist symbol (the letter "A" with a circle around it) sprayed on the driveway in black paint.

According to MPD, no arrests have been made, but the incident remains under investigation as a suspected politically motivated hate crime.

In a joint statement released the day after the incident, Fox News CEO Suzanne Scott and president Jay Wallace said of the occurrence:

The incident that took place at Tucker’s home was reprehensible. The violent threats and intimidation tactics toward him and his family are completely unacceptable. We as a nation have become far too intolerant of different points of view. Recent events across our country clearly highlight the need for a more civil, respectful, and inclusive national conversation. Those of us in the media and in politics bear a special obligation to all Americans, to find common ground.

The Twitter account belonging to the protest group, Smash Racism DC, has been suspended, but tweets posted the evening of the protest expressed that the group was angry about what they called Carlson's "racist rhetoric and fear mongering":

Every night you spread fear into our homes -- fear of the other, fear of us, and fear of them. Each night you tell us we are not safe. Tonight you’re reminded that we have a voice. Tonight, we remind you that you are not safe either.

In brief video uploaded to the video platform LiveLeak, the protesters can be heard chanting to the playing of a tambourine: "Tucker Carlson, we will fight; we know where you sleep at night."

The incident fueled a swift and sympathetic response from media personalities across the ideological spectrum who condemned the actions of the protesters. Late night television host and comedian Stephen Colbert, for example, stated: "Fighting Tucker Carlson’s ideas is an American right. Targeting his home and terrorizing his family is an act of monstrous cowardice."

But two days after the incident, Alan Pyke, a journalist for the liberal web site ThinkProgress who reported from the scene, challenged what he called Carlson's "significant embellishments" to the story. The protest lasted just ten minutes, Pyke said, and involved only 13 or 14 protesters, two of whom walked with the assistance of canes. One of the protesters didn't "throw himself" against Carlson's front door but merely knocked on it, Pyke wrote:

One of the protesters knocked firmly on Carlson’s front door three times then trotted back down the steps to join the rest of the group in the street. This person did not throw their body against the door, as Carlson has claimed to newspapers. A police report on the incident makes no mention of damage to the Carlsons’ front door from the three stiff knocks, contradicting Carlson’s claim that the demonstrators had cracked the door.

Another protester read a brief statement through an amplifying device, then led the group in a series of chants against Carlson’s habitual promotion of white supremacist ideology and xenophobia on his Fox News program. Some of the chants included the refrain “we know where you sleep at night.” At multiple points, a chant broke down despite the rhythm-track efforts of a protester with a tambourine.

Pyke also refuted reports that the protesters had threatened to "return with a pipe bomb," noting instead that one of the protesters had simply made reference to the recent series of pipe bombs mailed to prominent Democrats and Trump critics as an example of the kinds of harmful actions spurred by heated political rhetoric:

Video posted on LiveLeak shows portions of the event, which lasted less than 10 minutes. It also illustrates Carlson’s other embellishment -- that one person was caught on a security video saying they wanted to return to his home with a pipe bomb. In fact, the person filming is heard saying “Pipe bombs! Synagogue victims!” as the speaker with the amplifying device wraps up their initial statement and begins to lead chants. Carlson’s show and broader media empire have long amplified the same flavors of xenophobic paranoia and white supremacist ideology believed to have motivated alleged so-called “MAGAbomber” Cesar Sayoc and Pittsburgh synagogue shooter Robert Bowers. There is no mention of the phrase “pipe bombs” in the police report later filed.

Pyle also heard at least two protesters express dismay upon witnessing a black-clad person spray a symbol on the driveway as the group began to leave:

One straggler from the group then stopped, put a backpack on the ground, and retrieved a can of spray paint from it. As that straggler began to graffiti the anarchist A symbol on the Carlsons’ driveway, at least two members of the group walking away expressed dismay with their fellow traveler. “I didn’t sign up for this,” said one. “Seriously, what the fuck,” said another. A Metropolitan Police Department squad car rolled up the street from the south as the tagger, clad in black and face not visible, finished up the symbol.

The incident had mostly faded from discourse until the Daily Caller's interview with the President was published on 14 November 2018. One day later, Washington Post media critic Erik Wemple reminded readers he had gone to Carlson's home to inspect for himself the reported damage, publishing photographs of what appeared to be an intact door:

Several attempts by this blog to secure corroboration from Carlson himself have proved fruitless. In response to the last request, Carlson seemed miffed that we’d even checked in the first place: “Are you going to come back and illegally trespass on my property again?”

Many folks have taken the cracked-door claim at face value, including USA Today: “Antifa protesters chant outside Fox’s Tucker Carlson’s home, break door,” reads a headline on the protest. On his Fox News program, host Sean Hannity said of the incident: “His wife, home alone, having to barricade herself inside the house and calling the police. But not before the mob literally cracked his front door, throwing themselves against it, vandalizing his driveway ... with spray paint, shouting threatening messages over a bullhorn.”

Thanks to a Daily Caller interview, we now know that this group includes President Trump.

Critics have accused Carlson, who hosts one of the most-watched cable shows in the country, "Tucker Carlson Tonight," of using his far-reaching platform to promulgate racist views. On 7 September 2018 he drew considerable backlash for a segment in which he railed against diversity:

How, precisely, is diversity our strength? Since you’ve made this our new national motto, please be specific as you explain it. Can you think, for example, of other institutions such as, I don’t know, marriage or military units in which the less people have in common, the more cohesive they are?

Do you get along better with your neighbors, your co-workers if you can’t understand each other or share no common values? Please be honest as you answer this question.

And if diversity is our strength, why is it okay for the rest of us to surrender one of our central rights, freedom of speech, to just a handful of tech monopolies? And by the way, if your ideas are so obviously true, why does anyone who questions them need to be shamed, silenced and fired?