A neo-Nazi website claimed credit for the fliers, which were found posted at college campuses and other locations across the United States. 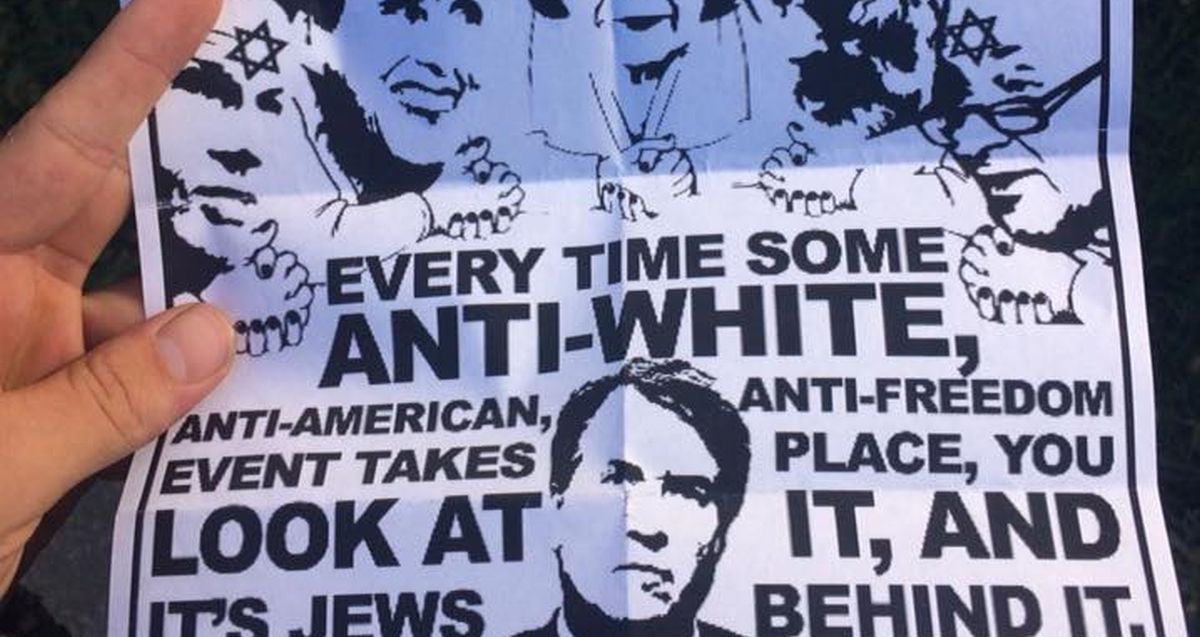 The crude handbills were distributed at colleges and other public institutions around the U.S. between 7 and 8 October 2018. They featured likenesses of several prominent Jewish Americans, including billionaire activist George Soros, the attorneys of Kavanaugh accuser Dr. Christine Blasey Ford, and senators Dianne Feinstein and Chuck Schumer, with a Star of David emblazoned on their foreheads. Also prominently featured was an image of Brett Kavanaugh accompanied by the words, "Every time some anti-white, anti-American, anti-freedom event takes place, you look at it, and it's Jews behind it."

Identical postings were reported on the University of California's Davis and Berkeley campuses; at Roanoke College in Salem, Virginia; at Vassar, Marist College, and Dutchess Community College in Poughkeepsie, New York; at a Planned Parenthood Health Center and the Interfaith Alliance of Iowa headquarters in Des Moines; and at various locations, including synagogues, in at least seven other states.

The president of Vassar, Elizabeth H. Bradley, addressed a statement about the issue to the students and faculty of the school on 7 October:

I am writing to alert you to a bias event on campus today. Anti-Semitic posters were put up in multiple buildings. All posters were immediately removed by Safety and Security, and the Bias Incident Response Team was alerted.

I condemn everything about these posters, which were linked to an organization that the Southern Poverty Law Center has reported as spreading anti-Semitism, neo-Nazism, and white nationalism. This is not who Vassar is, and we will not fall prey to the hateful messages of these posters.

To the UC Davis Community:

Today, anti-Semitic flyers were found on and near campus. The flyers have been removed, and we are working to identify those responsible for posting them.

The message on these flyers is reprehensible and does not represent who we are as a community. In addition, the person or persons responsible violated our posting policy.

Our Principles of Community expresses our dedication to mutual respect, understanding, compassion and caring for everyone, regardless of their religious affiliation, culture, ethnicity or gender. I ask each of you to uphold those values. ...

UC Davis is a diverse community comprised of individuals having many perspectives and identities. To all of our students, faculty and staff, please know I won’t stand for intolerance of any kind.

Oren Segal, the director of the Anti-Defamation League's Center on Extremism, said in a statement provided to Snopes.com that the poster campaign was instigated by the neo-Nazi website Daily Stormer:

White supremacist propaganda, including fliers that are explicitly anti-Semitic, continue to create fear and anxiety in communities around the country. The most recent flier distribution campaign attributed to Daily Stormer Book Clubs -- followers of neo-Nazi Andrew Anglin and his Daily Stormer website -- blame Jews for the allegations of misconduct against Brett Kavanaugh.

The campaign followed an October 7 post to the Daily Stormer website which claimed, “the anti-Kavanaugh movement was almost entirely Jewish in nature.” The fliers, which appear to have been distributed in at least 11 states, and reached several college campus and other institutions, demonstrates the ability of extremists to exploit mainstream politics in their messages of hate, as well as their ability to leverage technology to organize their efforts.

Indeed, a 12 October post on the Daily Stormer website boasted that the campaign was a "smashing success" and featured dozens of user-submitted photographs showing places where the fliers had been posted. The site's owner, Andrew Anglin, is a virulent racist and anti-Semite who has described Jews as "a vicious, evil race of hate-filled psychopaths."

During the first two weeks of October, vandals defaced Jewish community centers, schools, businesses, and private homes with swastika symbols in at least a half-dozen cities and towns across the United States.

"An insidious rise in hateful actions and anti-Semitism is happening in Virginia and across the country," tweeted Sen. Tim Kaine (D-Virginia) in the aftermath of one of those incidents. "We must meet it with fierce condemnation and an over-abundance of love and unity. We cannot allow hate to fester":

This is the Fairfax Jewish Community Center this morning.

An insidious rise in hateful actions and anti-Semitism is happening in Virginia and across the country. We must meet it with fierce condemnation and an over-abundance of love and unity. We cannot allow hate to fester. pic.twitter.com/85bW2Hl0th