The Michigan Department of Natural Resources has urged hunters to be on the lookout for signs of the disease, but its occurrence is not a significant risk to the general human public. 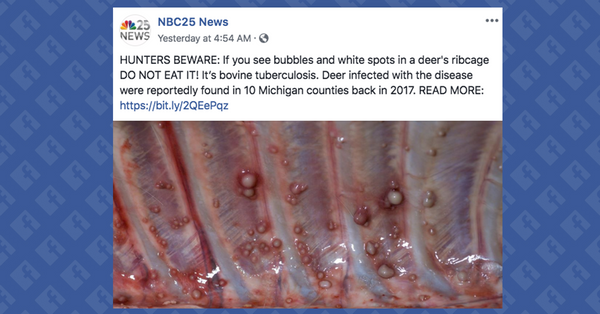 On 10 October 2018, numerous Michigan news outlets began reporting on the presence of bovine tuberculosis in that state's deer population. While the fact of bovine tuberculosis (bTB) in Michigan deer is not new (testing for bTB in deer has been ongoing since 1995, and the information in media stories comes from a 6 July 2017 report by the Michigan Department of Natural Resources), its re-emergence in news reports is likely motivated by the commencement of the Michigan deer hunting season and has gone viral thanks to a graphic Facebook post showing what an infected deer's rib cage might look like:

Michigan state officials and hunters have partnered for years to understand the spread of the disease, and the Michigan Department of Natural Resources has asked hunters to send deer heads for bTB testing and to be on the lookout for other signs of the disease. The study of bovine tuberculosis in deer populations has a long history in Michigan:

Bovine tuberculosis is a chronic disease that can take years to develop. The strains of bTB now present in Michigan are not native to North America, but were brought here by human movement of infected cattle from Great Britain in the 1700s and 1800s.

In the 1920s, nearly a third of cattle in Alpena and Alcona counties tested positive for bTB. In 1975, a single hunter-harvested white-tailed deer in Alcona County was found positive for bTB. At that time, it was thought that bTB couldn’t sustain itself in wild deer.

Nearly 20 years passed before a hunter harvested Michigan’s second bTB-positive deer in Alpena County in 1994. Since 1995, Michigan has been testing white-tailed deer for bovine tuberculosis year-round. Michigan has the longest- running continuous wildlife TB surveillance program in the world.

Since 1995, 900 deer out of 230,000 have tested positive for the disease, which can be transmitted to humans -- with the people who are at significant risk of contracting the disease being hunters, butchers, or people who eat freshly killed deer meat not found in stores, according to the Centers for Disease Control and Prevention:

People at higher risk include individuals who work with cattle, bison, or cervids (e.g., deer or elk), or products from these animals such as hides, milk, or meat. Examples of occupations or hobbies that might put people at increased risk include ranching, dairy farming, working in a slaughterhouse or as a butcher, and hunting.

The Michigan Department of Natural Resources concurs with this view, stating that the risk of transmission to the non-hunting, non-wild-deer-meat-eating public is low:

In the U.S. today, the threat of humans contracting bovine TB from animals is extremely remote. Health officials have confidence in the state's meat and milk supply. At risk are Michigan's deer herd and other wildlife species with their many social, ecological, and economic values as well as Michigan's livestock industry. By continuing to eliminate TB-infected animals from wild and domestic animal populations, paying close attention to the meat inspection and pasteurization processes, using proper food handling, and good management practices, the chance of bovine TB transmission from animals to humans is virtually eliminated.

While bubbles and white spots in a deer's ribcage, as mentioned in the viral post, are a potential symptom that the animal is infected with bovine TB, their absence does not necessarily mean a deer is free of the disease. “Infected deer may not show chest lesions,” the Michigan Department of Natural Resources stated. “Deer carcasses with chest lesions suspected to be evidence of bovine TB should be submitted from anywhere in the state.”

That testing, the post noted, is free of charge.