The news outlet was sued for stating it was "well known in intelligence circles that Seth Rich and his brother, Aaron Rich, downloaded DNC emails and was paid by Wikileaks." 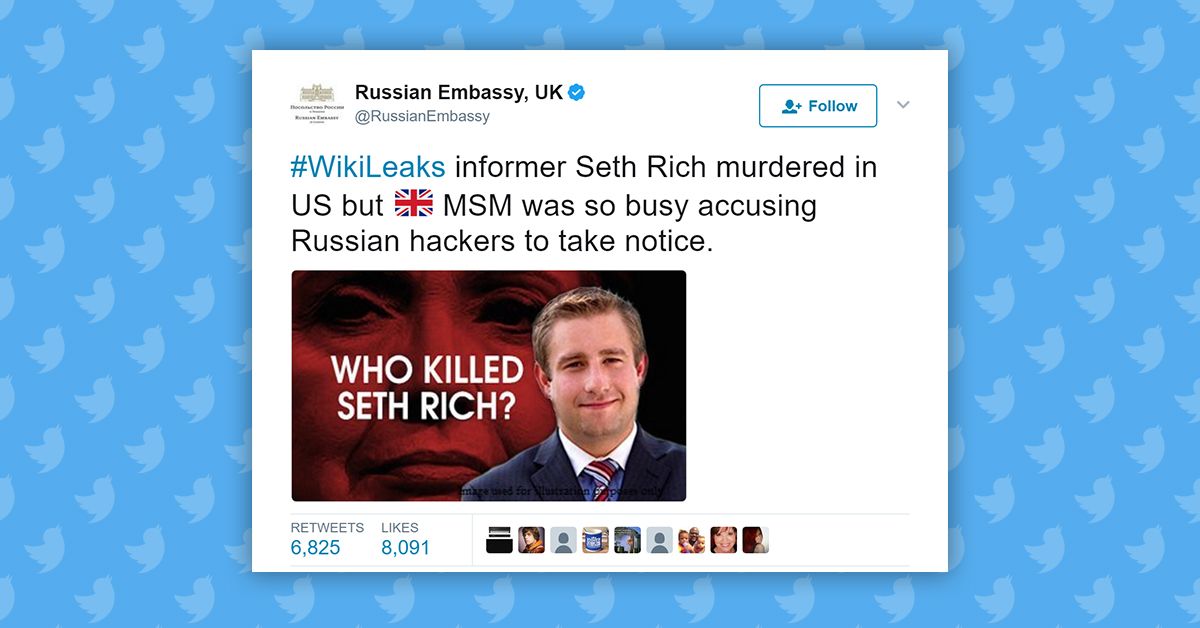 On 10 July 2016, Democratic National Committee (DNC) staffer Seth Rich was shot and killed just after 4 AM in Washington, D.C., in a case that remains open. His death quickly became fodder for myriad unsubstantiated conspiracy theories, including that Rich was covertly working to expose election fraud, was collaborating with the Federal Bureau of Investigation (FBI) on an unspecified investigation, was about to testify against Hillary Clinton in an unspecified case, and was the person who had supposedly provided WikiLeaks with thousands of leaked DNC email messages.

In May 2017, Fox News retracted a report claiming that Rich had leaked thousands of DNC e-mails to the WikiLeaks website before he died. In October 2018, the Washington Times followed suit and retracted elements of a March 2018 op-ed column on the same subject.

Data on [Seth Rich's] laptop revealed that Mr. Rich downloaded thousands of DNC emails and was in touch with Wikileaks. The file with evidence of what was on Mr. Rich’s laptop sits with the FBI in a co-shared space with the D.C. police department. According to Ed Butowsky, an acquaintance of the family, in his discussions with Joel and Mary Rich, they confirmed that their son transmitted the DNC emails to Wikileaks.

Since then, the DNC hired a “spokesperson,” Brad Burman, a known hatchet man to basically cut off any further communications with Mr. Rich’s parents. Interestingly, it is well known in the intelligence circles that Seth Rich and his brother, Aaron Rich, downloaded the DNC emails and was paid by Wikileaks for that information.

As to the last sentence quoted above, in their retraction the Washington Times noted that they now "believe [it] to be false" and do "not have any basis to believe any part of that statement to be true":

The Washington Times published an op-ed column titled, “More cover-up questions: The curious murder of Seth Rich poses questions that just won’t stay under the official rug,” by Adm. James Lyons (Ret.) (the “Column”), on March 1 online and on March 2 in its paper editions. The Column included statements about Aaron Rich, the brother of former Democratic National Committee staffer Seth Rich, that we now believe to be false.

One such statement was that: “Interestingly, it is well known in the intelligence circles that Seth Rich and his brother, Aaron Rich, downloaded the DNC emails and was paid by Wikileaks for that information.” The Washington Times now does not have any basis to believe any part of that statement to be true, and The Washington Times retracts it in its entirety.

CNN reported that Aaron Rich's attorney, Michael Gottlieb, said the retraction was part of a settlement Aaron Reached with The Washington Times after suing that news outlet for harm to his reputation and emotional distress caused by the suggestion he had played a role in the supposed DNC email theft:

Police have said evidence indicates [Seth Rich] was the victim of a botched robbery, but in the wake of his death, far-right activists and media organizations suggested something far more sinister. Without real evidence, they peddled a conspiracy theory that said Seth Rich leaked a trove of DNC emails to Wikileaks and was killed in retribution for the supposed leak. The theory was convenient for some on the right as they disputed allegations Russia hacked the DNC, something President Trump had raised doubts about.

Aaron Rich's lawsuit seeks damages for harm to his reputation and emotional distress, among other things, against ... The Washington Times for suggesting he played a role in the supposed email theft.

The suit alleges those people and media companies pushed a conspiracy theory about Aaron Rich that used his background as a defense contractor with technical expertise to suggest he worked with his brother to leak DNC documents to Wikileaks, received money for doing so, and then worked to cover-up the crime.