The social media giant has been under increasing scrutiny about the InfoWars conspiracy network's misleading content. 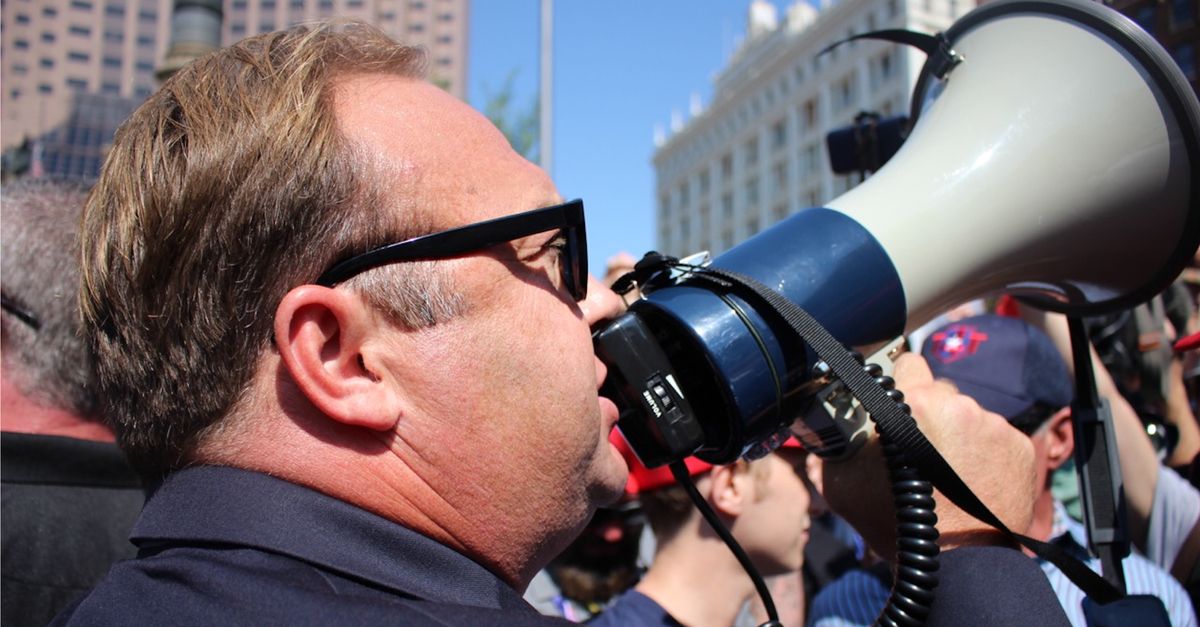 The move came as the social media giant both touted their efforts to crack down on misinformation with the 2018 midterm elections looming and struggled to justify allowing Jones, a long-time purveyor of misinformation and conspiracy theories, to maintain pages on Facebook. A company spokesperson said four videos attacking religious affiliation and gender identity posted by InfoWars had been removed from Facebook, while a fourth had been taken down for bullying:

Our Community Standards make it clear that we prohibit content that encourages physical harm [bullying], or attacks on someone based on their religious affiliation or gender identity [hate speech]. We remove content that violates our standards as soon as we're aware of it. In this case, we received reports related to four different videos on the Pages that Infowars and Alex Jones maintain on Facebook. We reviewed the content against our Community Standards and determined that it violates. All four videos have been removed from Facebook

Facebook appeared to follow YouTube's lead, which two days earlier had banned the same four videos for hate speech against Muslims and transgender people, and depictions of child endangerment. Those videos are all still live on the InfoWars web site, however.

One of the videos shows a man shove a boy of about seven years old onto his face on a paved surface. As the child wails, a voice-over intones, "Prevent liberalism and use condoms. Help save America. This has been a public service announcement from InfoWars.com." In another video, Jones says Eastern Europe isn't taking in any migrants from North Africa or the Middle East "because they know they're not compatible, they don't work, they commit massive crime, they are extremely caveman-like and war-like and treat women like dogs. They also attack people that own dogs. You don't have dogs under Islam." In yet another clip he likens drag culture with child abuse.

The question about Jones and his large Facebook following garnered widespread attention when CNN reporter Oliver Darcy asked about it during a 11 July 2018 event meant to tout the platform's commitment to fighting fake news. Darcy questioned how allowing Jones and InfoWars to remain on Facebook was consistent with the company's stated mission, to which Facebook executives replied that "just ... being false doesn't violate [Facebook's] community standards."

The platform's decision to ban videos for hate speech violations raised questions about InfoWars' habit of presenting predominantly non-white, Muslim migrants to Europe as a threat. We asked Facebook why a series of other posts published over a two-day period that cast migrants as threats didn't similarly run afoul of the hate speech standard: A Facebook spokesperson told us the posts, when taken on a case-by-case basis, did not violate the company's community standards on hate speech because they individually either didn't use dehumanizing language or directly attack migrants. They also did not overtly call for violence and thus could not be interpreted as threats.

Mark Pitcavage, senior research fellow for the Center on Extremism at the Anti-Defamation League, told us that although an anti-immigrant or anti-Muslim message is implied in many InfoWars posts, Facebook's moderators would be hard-pressed to interpret each post individually as constituting hate speech because of the level of nuance involved:

Dealing with Jones on a post-by-post basis doesn’t do much because these posts taken individually don’t cross a clear line.

A number of these posts contain troubling language [yet] don’t contain overt hate speech. But taken together, someone reading a bunch of these can certainly learn or imbibe intolerance or possibly even hatred toward immigrants or Muslims from the sum total of content.

You would have to look at the totality of the content and ask, when all of this is judged together, is this a site that is contributing to anything in any positive way, or is it a site that can only cause harm to society and provide a negative user experience for people on the platform? To what extent is he using or exploiting the platform in question to present ideas that are problematic, dangerous, and may incite violence or intolerance?

Jones and his ilk often use made-up nightmare scenarios about Muslim "no-go zones" and rampant migrant crime in Europe to tap into anti-immigrant sentiment in the U.S., where audiences may not have easy access to information that would debunk stories about events occurring thousands of miles away and reported in different languages.

Pitcavage recalled how in 2015 Jones was able to motivate his followers to take political action over a conspiracy theory he pushed claiming that Jade Helm, a military training exercise was in fact an effort by the Obama administration to invade Texas: "Jones does have the ability to motivate people to actually take action when he gets sufficiently agitated about something. The themes he chooses to promote, it becomes important. If he increasingly has anti-Muslim or anti-immigrant content, that is inevitably going to have an effect on his audience."

On 25 July 2018, Leonard Pozner and Veronique De La Rosa, parents of Noah Pozner, a 6-year-old murdered in the 2012 Sandy Hook elementary school massacre, published an open letter to Facebook CEO Mark Zuckerberg blasting the social media giant for "protecting" hoax theories claiming that the victims of the school shooting were "crisis actors" and that the shooting never took place. Jones is currently being sued by Pozner and De La Rosa, who claim he defamed them by heavily promoting those stories on InfoWars.

Amid these controversies, Facebook was also criticized for allowing a 23 July 2018 video to remain on their platform in which Jones ranted, "It's not a joke. It's not a game. It's the real world. Politically. You're going to get it, or I'm going to die trying, bitch," about U.S. Department of Justice special council Robert Mueller, who is currently investigating Russian interference in the 2016 U.S. presidential election.

Pozner, Leonard, and Veronique de la Rosa.   "An Open Letter to Mark Zuckerberg: Our Child Died at Sandy Hook — Why Let Facebook Lies Hurt Us Even More?"     The Guardian.   25 July 2018.