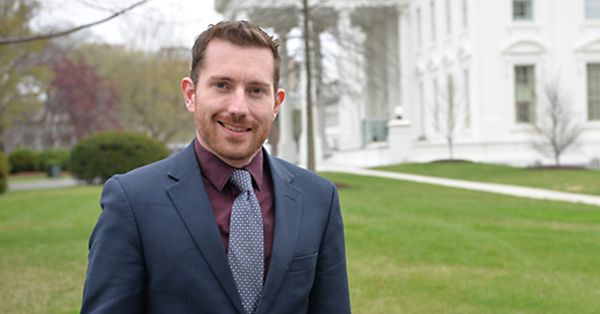 In June 2018, for the second time since taking office, U.S. President Donald Trump has failed to issue a proclamation recognizing the LGBTQ community at the start of Pride month — and for weeks, Washington Blade reporter Chris Johnson had been trying to ask why the administration apparently broke with a pattern set by its predecessor.

But in keeping with a different new tradition, White House Press Secretary Sarah Sanders has ignored his hand every times he raises it to ask.

The Blade is the only LGBTQ-focused news outlet attending White House briefings, and Sanders has only called on Johnson once — in January — during her tenure as press secretary. He doesn't know exactly why, but Johnson told us it is in keeping with the Trump administration's "disengaged at best, hostile at other times" approach to the LGBT community. "Their not calling on me is very consistent to that approach," he told us.

Blade editor Kevin Naff told us Sanders' refusal to take questions from the only reporter in the room from an LGBTQ publication is "frustrating and disappointing, but not surprising." Overall, he said, the administration's approach to the community has been disenfranchising.

He pointed to Trump's sudden decision to ban transgender troops from serving in the military, the nomination of judges with anti-LGBT track records to fill federal court vacancies and the U.S. Justice Department's support for "religious freedom" which he called code for denying services to LGBT people. Naff told us:

There have been smaller ways in which the administration is going after the community as well. That’s why it’s important to get called on in that briefing room. When we ask those questions in front of the mainstream outlets, it helps call their attention to stories they're missing.

In December 2017, rumors swirled that the White House had purposely excluded LGBT and African-American reporters from its annual Christmas party because Johnson and April Ryan, White House correspondent for American Urban Radio (which describes itself as “the nation’s only African-American controlled network radio company”) didn't receive invites. This was also a break from practice in previous years. At the time, a White House spokeswoman told us the failure to invite them was an "oversight."

Shortly after that controversy, Naff said he reached out to Sanders. Dialogue ensued and Johnson got called on during a January briefing. Naff said, "We were cautiously optimistic, and then it’s been radio silence."

As a candidate, Trump had made overtures to the LGBTQ community, tweeting in June 2016 he would "fight for you". During a speech in July 2016 while discussing terrorism and decrying "Islamic radicals," Trump told a cheering crowd:

As your president I will do everything in my power to protect our LGBTQ citizens from the violence and oppression of a hateful foreign ideology.

One year later, however, President Trump abruptly announced on Twitter his plans to ban transgender people from serving in the military.

Founded in 1969, the Blade is the oldest and one of the largest LGBT news publication in the country and as Johnson pointed out, unique in that with any question Sanders takes from a Blade reporter, she can expect the administration will be held accountable for issues, concerns and questions focused on that community. "I think it would be beneficial to the American public, to the LGBT community and the Trump administration to call on me to address these issues, so we have a clear understanding of where they’re coming from," he told us.

Not calling on the gay paper, not inviting the gay reporter and the African-American reporter to the Christmas party, these are the petty retaliatory tactics we have seen form the administration.

In April 2017, after photographs of the annual White House Easter Egg Roll appeared to depict mostly white children in attendance, readers asked if the Trumps had purposely excluded children of color. Months after the event, after repeated questions and a Freedom of Information Act request, we still had no definitive answer.

We sent Sanders questions asking why she doesn't call on Johnson, whether it's purposeful, and if so, why. We also followed up on Johnson's question: Why hasn't President Trump issued a proclamation recognizing Pride month? We await a response.