Immigration lawyers have already vowed to take legal action against Sessions's ruling, which would deny asylum to almost all victims of gang violence and domestic abuse. 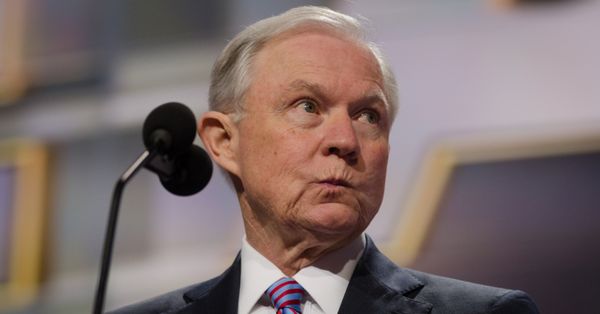 Attorney General Jeff Sessions has reversed a landmark 2014 decision by the Board of Immigration Appeals to rule that fleeing domestic abuse and gang-related violence should not be considered a basis for being granted asylum in the United States, except in rare cases.

In a decision published on 11 June 2018, Sessions determined that refugee or asylum status ought to be restricted to individuals who can establish that the persecution they are suffering in a foreign country is based on their membership of a "particular social group" with a "common immutable [unchangeable] characteristic" and that except in rare cases, being the victim of domestic violence or gang-related persecution does not constitute membership of such a group.

An applicant seeking to establish persecution on account of membership in a “particular social group” must demonstrate: (1) membership in a group, which is composed of members who share a common immutable characteristic, is defined with particularity, and is socially distinct within the society in question; and (2) that membership in the group is a central reason for her persecution. When the alleged persecutor is someone unaffiliated with the government, the applicant must also show that her home government is unwilling or unable to protect her.

...The mere fact that a country may have problems effectively policing certain crimes or that certain populations are more likely to be victims of crime, cannot itself establish an asylum claim. To be cognizable, a particular social group must exist independently of the harm asserted in an application for asylum.

This contradicted a 2014 Board of Immigration Appeals ruling in which the BIA found: "Depending on the facts and evidence in an individual case, 'married women in Guatemala who are unable to leave their relationship' can constitute a cognizable particular social group that forms the basis of a claim for asylum..."

The 2014 case revolved around a Guatemalan woman (with the initials C.G.) who had fled to the United States in 2005 and applied for asylum after years of brutal and violent physical and psychological abuse at the hands of her husband, who regularly beat and raped her. The Department of Homeland Security, under the administration of former president Barack Obama, did not dispute these facts.

The BIA concluded that this woman was indeed a member of a "particular social group" with shared and immutable characteristics because the gender of members of that group was unchangeable, as was their married status. Given the violent possessiveness of their husbands, and in the face of Guatemalan cultural norms around marriage and divorce, the women were effectively unable to become unmarried, and therefore their membership of the group in question ('married women in Guatemala who are unable to leave their relationship') was also unchangeable.

The BIA pointed out that the woman in the case had repeatedly attempted to remedy her dire circumstances within her own community and country, but her efforts were thwarted. Although she repeatedly reported her husband's violent physical abuse to local police, the police declined to take the matter any further as they did not want to intervene in what they perceived as a marital dispute. Thus, the BIA reasoned, her own government had effectively declined to protect her from the persecution and abuse she suffered.

When the woman fled to another city her husband tracked her down and forced her to live with him as his wife once more. The woman's husband repeatedly threatened to kill her after she made attempts to extricate herself from the marriage. As a last resort, she fled to the United States.

In its analysis of the decision, the Harvard Law Review noted in 2015 that the BIA had not definitively resolved all disputes relating to the "social group" and "persecution" criteria of asylum applications, but it had "unambiguously [established] that women fleeing domestic violence can be eligible for particular social group–based asylum" and "meaningfully [moved] the law of asylum toward more consistent and expansive recognition of domestic violence–based asylum claims."

In his June 2018 decision, Sessions overruled this, writing: "That decision was wrongly decided and should not have been issued as a precedential decision."

In addition, the Attorney General criticized a similar 2016 BIA decision, which ruled favorably towards a Salvadoran woman who fled to the United States in 2014 after suffering violent abuse at the hands of her ex-husband and applied for asylum on the basis that she had been persecuted without the protection of her government, due to her membership of the group "El Salvadoran women who are unable to leave their domestic relationships where they have children in common."

Generally, claims by aliens pertaining to domestic violence or gang violence perpetrated by non-governmental actors will not qualify for asylum. While I do not decide that violence inflicted by non-governmental actors may never serve as the basis for an asylum or withholding application based on membership in a particular social group, in practice such claims are unlikely to satisfy the statutory grounds for proving group persecution that the government is unable or unwilling to address.

The mere fact that a country may have problems effectively policing certain crimes—such as domestic violence or gang violence—or that certain populations are more likely to be victims of crime, cannot itself establish an asylum claim.

When it came to gang violence, the Attorney General reasoned that its victims cannot be considered as a "particular social group," because those victims come from diverse socioeconomic backgrounds, are often chosen as victims simply on the basis of proximity and convenience for gang members, and do not uniformly share any defining characteristic beyond the fact that they all happen to have been victimized by gangs:

Victims of gang violence often come from all segments of society, and they possess no distinguishing characteristic or concrete trait that would readily identify them as members of such a group.

...A criminal gang may target people because they have money or property within the area where the gang operates, or simply because the gang inflicts violence on those who are nearby. That does not make the gang’s victims persons who have been targeted “on account of” their membership in any social group.

Sessions explicitly likened this to domestic violence, and brought up the case of C.G.:

The BIA, an administrative body under the Department of Justice, can issue "precedent decisions," to which immigration judges around the United States are bound (as in the case of C.G., for example.) However, its decisions can be overturned by a federal court or the U.S. Attorney General (just as Sessions overruled the BIA's precedent decision in the C.G. case.)

As a precedent decision in its own right, Sessions's June 2018 ruling can — and most likely will — be challenged in federal court. The American Immigration Lawyers Association has already vowed to take legal action against what its executive director Benjamin Johnson called "this shameful chapter in our country's history."

The Attorney General is turning back the clock on nearly twenty years of asylum law and undermining access to protections for bona fide asylum seekers who have suffered domestic violence, gang violence, or other forms of persecution by private actors. He blatantly ignores the conditions in countries that our own asylum law demands be taken into account when deciding these cases.

This decision must also be examined in light of the Central American women and families who are now coming to our borders seeking protection from the uncontrolled, extreme levels violence in their home countries. These women are not safe in their own countries because the government cannot or will not protect them.

In April, the American Bar Association, the largest body of legal professionals in the United States, filed a brief with the Department of Justice, urging Sessions not to reverse existing BIA precedents and arguing that private criminal activity becomes persecution when foreign governments cannot or will not intervene to protect its victims.

Overruling such precedents -- which Sessions did on 11 June -- would "further victimize those most in need of protection," the ABA pleaded at the time.