Reporters for three news agencies were prevented, in at least one case with physical force, from covering a "National Leadership Summit" on water contaminant regulations. 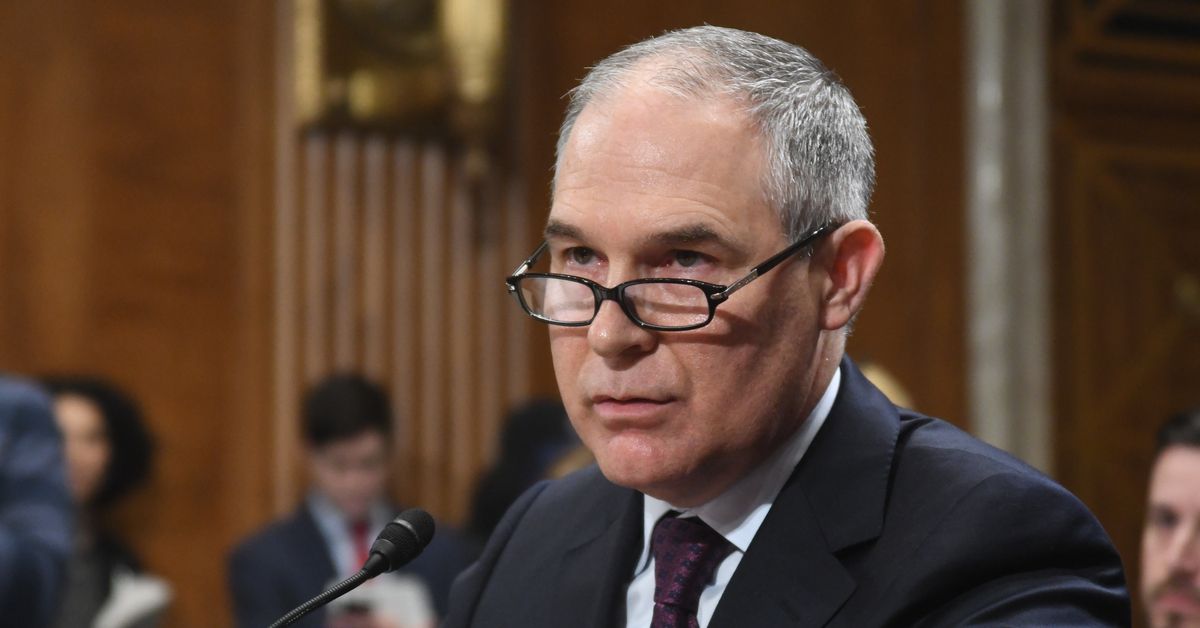 On 22 May 2018, the Environmental Protection Agency hosted what was billed in a March 2018 press release as a two-day-long National Leadership Summit "to take action on Per- and Polyfluoroalkyl Substances (PFAS)" — chemicals widely used to make stain-resistant, waterproof, or nonstick products, and which can contaminate drinking water. EPA administrator Scott Pruitt first offered the invitation to "governors of 56 states and territories":

"EPA’s leadership summit will bring together stakeholders from across the country to build on the steps we are already taking and to identify immediate actions to protect public health," said EPA Administrator Scott Pruitt. “Through this event, we are providing critical national leadership, while ensuring that our state, tribal, and local partners have the opportunity to help shape our path forward." [...]

PFAS regulation is a topic of great interest to reporters on the environmental regulation beat. In mid-May 2018, reports first emerged that Pruitt and the Trump administration had sought to block the release of a study performed by the Agency for Toxic Substances and Disease Registry (ATSDR) that demonstrated that PFAS are potentially harmful at much lower concentrations than previously thought. The report had been described internally as politically damaging. A 15 May 2018 report by E&E News’ Corbin Hiar described the controversy:

Congressional Democrats yesterday expressed outrage that the Department of Health and Human Services still hasn't published a toxicology study that a White House official earlier this year described as a "potential public relations nightmare.” The lawmakers are demanding that the study be released immediately and that an oversight hearing be held. [...]

An unnamed member of the White House's intergovernmental affairs team warned that the draft toxicology profile [on PFAS], "has some very, very low 'Minimal Risk Level' (MRL) numbers," the lowest of which is 12 parts per trillion in drinking water — over 80 percent below the current maximum safe level EPA has advised for two types of PFAS.

"The public, media, and Congressional reaction to these new numbers is going to be huge," the official predicted in a note that was sent to EPA on Jan. 30 by Jim Herz, the associate director for natural resources, energy and science at the White House's Office of Management and Budget. "The impact to EPA and [the Department of Defense] is going to be extremely painful."

Hiar was one of three reporters that security prevented from entering the summit on Tuesday morning. Reporters for CNN and the Associated Press were also prevented from attending, with the latter removed by force. CNN later reported:

Journalists from CNN, the Associated Press and E&E News, a publication that covers energy and environment issues, were barred by the EPA from entering the event, which was focused on harmful chemicals in water. A handful of other reporters from other news organizations, however, were allowed inside the event for Pruitt's opening remarks after having been previously invited by the agency the day before. [...]

Additionally, the Associated Press said in a story that one of its reporters, denied entry, was grabbed by security guards and forcibly shoved out of the building after asking to speak to an EPA public affairs person. A CNN photographer saw the female journalist being shoved out of the building by a uniformed guard, and the Associated Press journalist recounted the incident to CNN immediately after it took place.

Lincoln Ferguson, an adviser to Pruitt, reached out the reporter who was forcibly removed to apologize, the AP later reported.

The AP also reported that "Pruitt’s remarks at the meeting were listed on his public schedule and described as being open to the press on a federal daybook of events." All three outlets released statements stating their view that the incident represented a selective and intentional exclusion of certain journalists:

In a statement, a CNN spokesperson said, "Today, CNN was turned away from covering the PFAS National Leadership Summit at the EPA after multiple attempts to attend. While several news organizations were permitted, the EPA selectively excluded CNN and other media outlets. We understand the importance of an open and free press and we hope the EPA does, too.

Sally Buzbee, executive editor of The Associated Press, said in a separate statement, "The Environmental Protection Agency's selective barring of news organizations, including the AP, from covering today's meeting is alarming and a direct threat to the public's right to know about what is happening inside their government." [...]

Cy Zaneski, executive editor of E&E News, also released a statement: "Our readers rely on us to provide thorough daily coverage of energy and environment issues. EPA's National Leadership Summit on PFAS is focused on an important public health concern that we have followed closely over many years. Our reporter deserved to be in that room to ask smart questions of EPA officials."

Responding to the allegation that the EPA was selectively preventing certain outlets from covering the event, spokesperson Jahan Wilcox alleged that the issue was merely one of the room reaching capacity. "This was simply an issue of the room reaching capacity, which reporters were aware of prior to the event," Wilcox said in a statement. That claim, however, is belied by reports that there were numerous open seats in the room during administrator Pruitt’s keynote speech. The Hill, which was specifically invited to attend the event, reported:

A handful of assigned reporter seats remained vacant by the time Pruitt began speaking, including one for a Wall Street Journal reporter who decided to watch the event via the livestream instead. A seat marked for Hearst Media was left open. Another publication was invited to the event but declined to send a reporter after learning that Pruitt would not be taking questions. CBS was the only major news outlet recording the event on video from the back of the room.

Politico cited a reporter who said, "There were dozens of empty seats in the room." Another EPA communications staffer, Andrea Drinkard, went with an amended version of that story, telling Politico the move to limit press was geared toward protecting the views of leaders in the room, who would be voting on things by raising their hands:

Andrea Drinkard, an EPA communications staffer, said the meeting was at capacity and that attendees would be raising their hands to vote in a “polling system” and would not be comfortable with media in the room.

(We have reached out to the national EPA press office by phone and by e-mail, the regional press office for the DC area by e-mail, and Pruitt himself via Twitter, but have not received a response from any representative of the EPA.)

Following the intense backlash the EPA received by removing of journalists from an event of public interest, the members of the press were allowed in to the event after Pruitt’s remarks, which consisted of vague commitments to establish new limits on PFAS with no allowance for follow up questions. Hiar, the E&E reporter initially banned from covering the event, described his frustration with his inability to challenge Pruitt on his claims or ask for clarification of his remarks:

Not mentioned by [Pruitt] or any of the speakers who followed him before the livestream ended was a delayed toxicology study of four PFAS chemicals that the Agency for Toxic Substances and Disease Registry earlier this year [said] was poised to conclude [these PFAS chemicals] were more harmful than previously thought.

Scott Pruitt is currently is the subject of numerous ethics controversies. Asked about the reporters' expulsion from the event, White House Press Secretary Sarah Huckabee Sanders told reporters that she had no details about the incident, but that the administration was going to look into it.