A California lawsuit alleges high levels of lead in spices manufactured by Spice Supreme’s parent company, but the data underlying that legal challenge is not public. 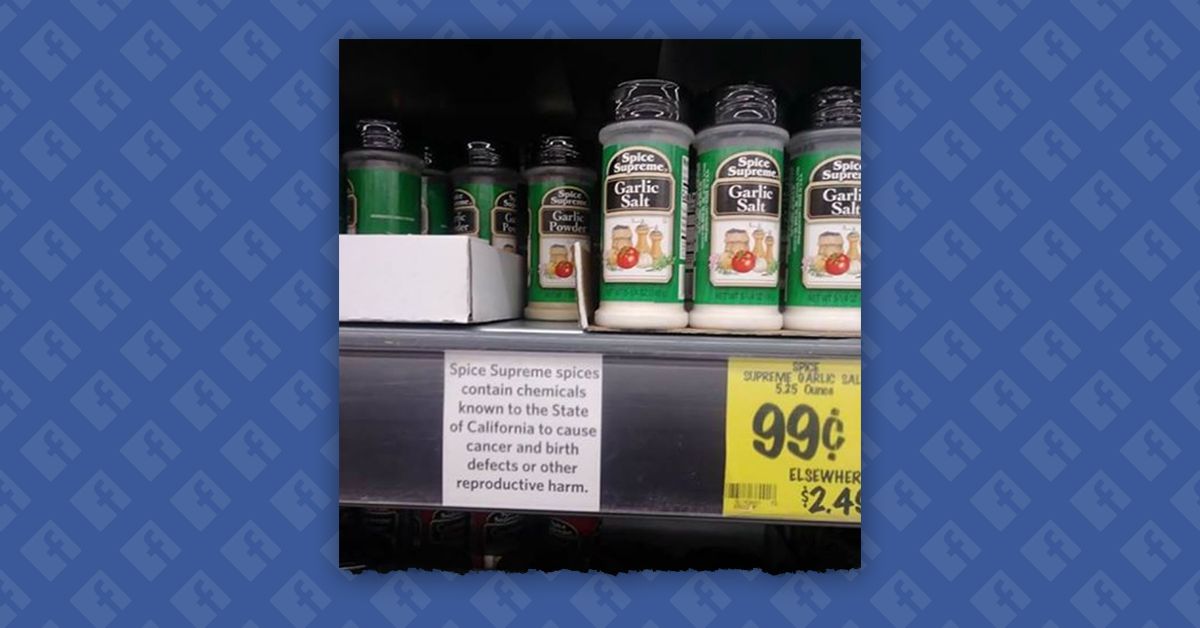 On 28 April 2018, a photograph on Facebook from an unnamed California grocer went viral. The image shows a collection of "Spice Supreme" products on a shelf next to this warning:

Spice Supreme spices contain chemicals known to the State of California to cause cancer and birth defects or other reproductive harm.

Several concerned readers have asked us if the image is real, and, if so, if the danger is accurately described. However, the answer to that question — at least currently — is a legal one, not a scientific one. This is thanks to a California law known as Proposition 65.

The state of California has some of the strictest laws in the world regarding required warnings about chemicals that may produce carcinogenic or reproductive harm. Proposition 65, also called the Safe Drinking Water and Toxic Enforcement Act, has, since 1986, mandated the publication of a list of chemicals that are "known to the State of California to cause cancer or reproductive toxicity" and imposed labeling requirements on any product sold in California that includes relevant concentrations of these chemicals.

It is likely, based on litigation currently in the courts, that the warning present next to Spice Supreme in the viral image stems from legal challenges under Proposition 65 brought against manufacturers and retailers of spices that potentially — though not yet demonstrably — contain higher than normal levels of lead.

In 2016, a series of recalls were issued for specific products bottled by Gel Spices, the parent company of the Spice Supreme brand, over high levels of lead found during "routine sampling by New York State Department of Agriculture and Markets’ food inspectors and subsequent analysis of the product by the New York State Food Laboratory." The first recall concerned only a specific batch of a brand of ground turmeric, but was later broadened to include all of Gel Spices turmeric products, including those bearing the Supreme Spice brand.

This recall, and a 2016 class action lawsuit following it, serve as a backdrop for the efforts of a California-based consumer protection group named Consumer Advocacy Group, Inc (CAG). Under Proposition 65 — which allows private litigants to sue on behalf of the public — the group has filed an "intent to sue" notice against a number of spice products and the retailers that stock them. This bureaucratic requirement provides potential defendants 60 days in Proposition 65 lawsuits to rectify their compliance with the law before further legal action is taken.

CAG has filed multiple 60-day notices to sue Gel Spices and other companies. On 22 July 2016, CAG informed Gel Spices of their intent to sue over lead in their cinnamon products. That notice also included Dollar Tree Stores, a company that had been selling those products. A 29 August 2016 notice informed both Gel Spices and Big Lots stores that they were taking similar action as a result of Gel Spices' cumin products, which CAG alleged also contain high levels of lead.

In April 2018, CAG filed two more notices against Gel Spices and stores that sell their products — California's Viva Bargain chain and Vernon Bargain, Inc. In both of these cases the affected products were grouped more broadly into "ground spices containing lead and lead compounds," potentially suggesting any spice product produced by Gel Spices (including the whole line of Spice Supreme) could be legally liable.

Importantly, the allegation of high concentrations of lead in these products is based on data that has not yet been released publicly. We reached out to the attorney representing CAG in these actions, Reuben Yeroushalmi, to ask on what scientific data CAG based their potential lawsuits on. He told us that their legal challenge is based primarily on their own data conducted by registered laboratories, the results of which have not yet been made public. He told us that the results would be sealed pending the result of their litigation.

While we cannot say definitively, it is likely that the notice placed next to Spice Supreme products in the viral photo is a move made by a retailer as an effort to satisfy these or similar notices of lawsuits brought under Proposition 65 before any litigation has occurred.

The scientific question of any potential danger caused by Spice Supreme products, in terms of lead, revolves entirely on data we have not seen and concerns concentrations not yet made public. Legally, the question remains to be addressed conclusively by the courts.