The former representative has a track record of visiting the war criminal president and spreading conspiracy theories about Syria. 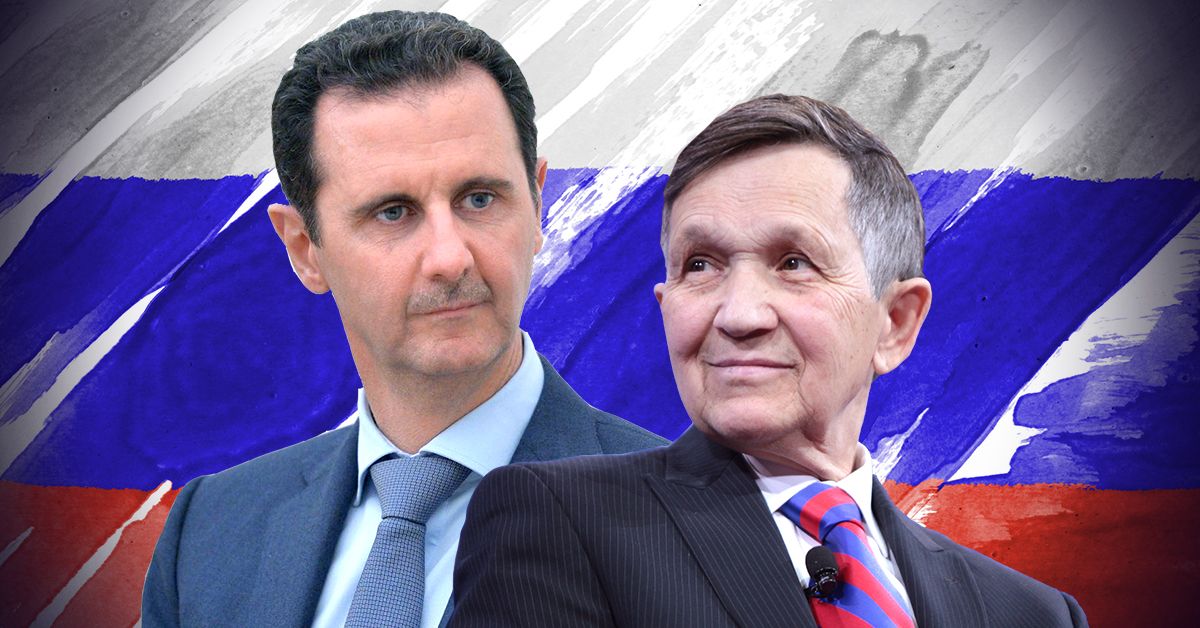 On 4 April 2017, the same day dozens of civilians suffocated to death in a sarin gas attack carried out by the regime of Syrian president Bashar al-Assad in the town of Khan Sheikhoun, former United States Representative and current Ohio gubernatorial candidate Dennis Kucinich boarded a plane and flew to Britain to speak at a two-day conference attended by two Syrian government officials. The event was organized by the European Centre for the Study of Extremism (EuroCSE) — an organization described by multiple Syrian organizations in Britain as existing "primarily to spread propaganda for the Assad dictatorship."

After yet another deadly attack in Syria on 7 April 2018 in which the Assad regime has again been accused of killing scores of civilians with chemical weapons in the city of Douma, Kucinich's trip and its funding source — along with multiple visits to Syria and meetings with Assad — are now a point of scrutiny for the candidate who is seeking the Democratic party nomination for the November 2018 Ohio gubernatorial election.

In statements to reporters, Kucinich and his campaign said he is not pro-Assad but is instead pro-peace, and that the conference "was to bring peace and reconciliation to Syria, not to support the current regime."

But many say Kucinich's trips to Syria and others like it made by American and European political figures, where they frequently meet with Assad, do nothing but provide an appearance of legitimacy for a regime that according to the United Nations has committed "crimes against humanity of extermination, murder, rape or other forms of sexual violence, torture, imprisonment, enforced disappearance and other inhuman acts" over the past several years.

Leila Al-Shami, writer and co-author of the book Burning Country: Syrians in Revolution and War, told us the regime promotes such visits favorably in the Syrian news media, because they provide cover for war crimes:

Those who visit and then promote regime narratives are legitimizing the regime, they are white-washing Assad and often spreading conspiracies or engaging in atrocity denial. Often these people may be fringe figures, sometimes they will be 'respectable' politicians, but they all contribute to a campaign of disinformation and support for a brutal dictator. They have contributed to a climate of uncertainty among the general public which has made all attempts at practical solidarity with Syrians suffering oppression and war virtually impossible.

On 17 April 2018, Kucinich was pressured by his political rivals to reveal that he was paid $20,000 to speak at the EuroCSE conference by an umbrella nonprofit on behalf of the Syria Solidarity Movement, a California-based organization that opposes U.S.-led regime change in Syria and shares regime propaganda and conspiratorial stories on its web site. These include unfounded claims that reputable human rights organizations like Amnesty International, Medecins Sans Frontiers (Doctors Without Borders) and Human Rights Watch, along with multiple Syrian organizations including the volunteer rescue group known popularly as the White Helmets, are "front" organizations for a nefarious conspiracy to bring down the Assad regime through so-called false flag attacks.

After a 21 April 2018 exposé by the Huffington Post delving into his relationship with fundraising brothers Elie and Bassam Khawam, who planned, paid for, and accompanied Kucinich and Rep. Tulsi Gabbard on a controversial January 2017 trip to Syria where they met with Assad, the Kucinich campaign released a statement explaining he has long been friends with the Khawams, claiming the brothers have no ties to the regime. (Gabbard has since pledged to refund the cost of the trip to the Khawams' organization, ACCESS-Ohio, because the controversy had become a "distraction.")

The story reports that the brothers, who are Lebanese-American Christians, are affiliated with the Syrian Social Nationalist Party (SSNP), an Assad-friendly political party that had named Elie Khawam the "Director of Cross-Border Affairs" on its web site. (The reference has since been removed.)

Bassam Khawam said in a statement through the Kucinich campaign that they do not have ties to the Syrian government:

We have lived through and survived wars in Lebanon, the country of our birth. We are pro-American and pro-peace. We want the killings and the bombings and the devastation in Syria to stop. We want to see an end to the slaughter of Christians by ISIS and Al-Nusrah. Jihadi extremists have been pouring into Syria and the region from all over the world, creating mortal danger for Christians. We want anyone responsible for the reported atrocities in Syria to be brought to justice – whoever it is.

Our efforts to reach the Khawams were unsuccessful.

Kucinich has for years taken to American airwaves or appeared on Russian state-sponsored network RT in the wake of chemical attacks in Syria, railing against any potential military response from the United States to chemical attacks on civilians. He also has a track record of helping to spread what is tantamount to typical disinformation, sowing confusion or even calling into question whether a reported  attack actually happened.

In the days after the 21 August 2013 chemical weapons attack in Ghouta in which roughly 1,500 civilians died, Kucinich tweeted that the attack may be a "false flag," which is conspiracy-jargon for an attack engineered to create public consent for military action:

"This is being used as a pretext. The verdict is in before the facts have been gathered. What does that tell you?” said Kucinich, adding that the Obama administration was “rushing” toward a possible “World War 3."

Days after the Khan Sheikhoun attack, Kucinich went on Fox News and, in an interview with host Pete Hegseth, insisted there was no evidence the attack was carried out by the Assad regime. He claimed it could have been launched from the ground, even though the Pentagon had released data showing the flight pattern of the aircraft used in the attack (the Assad regime is the only faction in Syria that has an air force). When we asked Kucinich's spokesman about the conspiratorial nature of some of his statements, he pointed us to this statement from Kucinich:

What anyone "believes" is a wholly irrelevant and dangerously simple-minded question. Much of the U.S. Congress, much of the mainstream media, and millions of people in the United States, Europe, and elsewhere "believed" that Saddam Hussein had weapons of mass destruction. That notwithstanding, whoever is responsible for chemical attacks or other atrocities or war crimes should be brought to justice to answer and pay for those actions — whoever it is!

Leila Al-Shami criticized the position of self-proclaimed "pro-peace" activists who declare themselves to be "anti-war" but who do not acknowledge that war crimes have indeed been committed by the Assad regime and Russia, or the fact the United States has been fighting factions in the multi-front proxy conflict for years:

Some 'anti-war' activists are blind to any war that is not instigated by the US. They may protest US airstrikes on empty regime military bases, or chemical weapons facilities, but they have failed to protest the war Assad has waged for the past few years (including on a civilian population). They have not protested Russia's intervention or it's targeting of hospitals or use of prohibited weapons such as phosphorous. The fact that they protest the recent airstrike but not the US intervention in Syria which has been occurring since 2014 also suggests that 'Hands of Syria' really means 'Hands off Assad'. Over 1,000 civilians were killed by US airstrikes in Raqqa and 80% of the city was destroyed.

Amid growing controversy, Kucinich announced on 26 April 2018 that he would return the $20,000 speaking fee he received from the Syria Solidarity Movement. In a letter to the Cleveland Plain Dealer on the matter, Kucinich wrote:

When I was invited to speak by the European Centre for the Study of Extremism in London last year on the topic of resolving the conflict in Syria, a California-based organization named the Association for Investment in Popular Action Committees offered to pay the speaker’s fee. The organization did not identify itself as having any interest other than human rights and never specifically mentioned to me their interest in or position regarding the Syrian regime. If they had, I would have declined their offer, because anyone who stands for peace must be able to remain above the appearance of influence. Accordingly, having only recently learned of their advocacy, I am returning their fee.

I am not nor have I ever been an apologist for anyone. In a lifetime as a public servant I have never carried water for any interest, foreign or domestic. A look at the interview I conducted on Fox News with President Assad should dispel that notion.

The speech I did give in London was not in support of the regime, but rather a measured statement on the imperative of a peace process to end the violence in Syria. I appreciate the Ohio Ethics Commission’s assistance in bringing my filing regarding that speech into compliance with financial reporting requirements. The omission was unintentional and immediately rectified upon notification.

The politics of our state, our nation and the world are more polarized than ever. In my desire to change that, have learned a valuable lesson on the necessity of ever more carefully regarding the appearance of entanglement.

I shall take this lesson to heart and proceed in my work for peace and justice better equipped for the experience.