The Bibb County Sheriff's Office has charged 71-year-old Judy Tucker with simple battery in an incident that may have been sparked by racial and homophobic abuse. 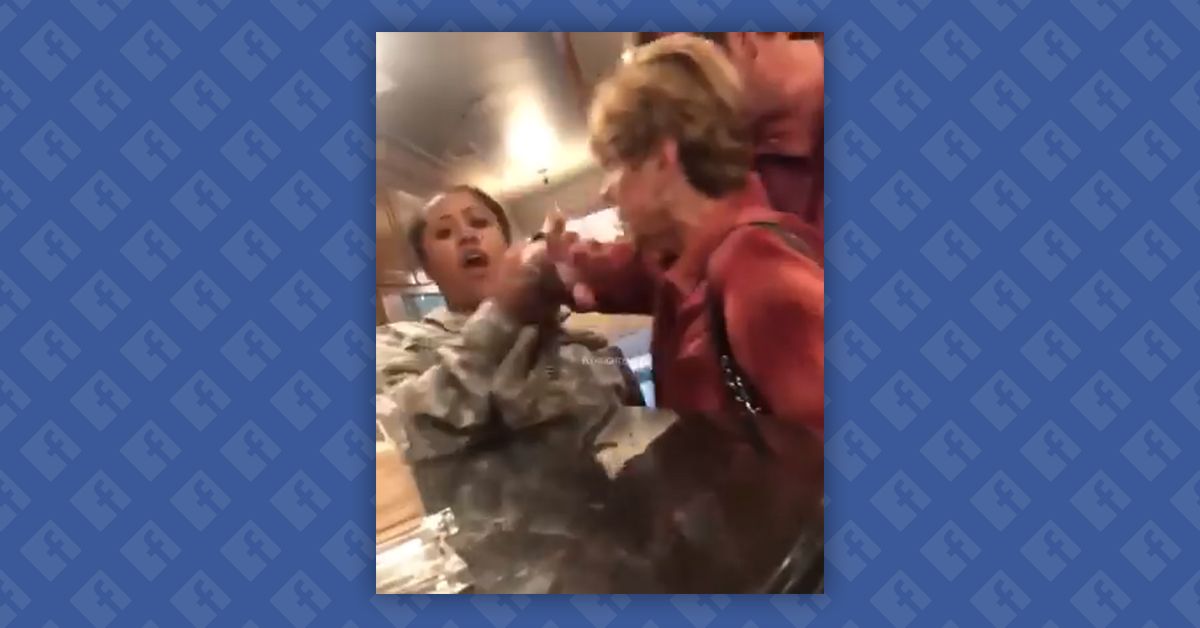 On 14 April 2018, police in Bibb County, Georgia arrested 71-year-old Judy Tucker following an altercation at a local restaurant that became a series of viral videos.

Tucker, who is white, has been charged with battery after a physical struggle with two black women who are members of the armed services. Police have identified Tucker as the "primary aggressor." Videos show the fight at the Cheddar's Scratch Kitchen in Macon, which may have been sparked by racist and homophobic slurs.

In one video, Tucker attempts to wrench a cellphone from the hands of a woman identified by the Bibb County Sheriff's Office as Treasure Sharpe. Sharpe, who is black, had been video recording the ongoing altercation, which took place on a Saturday night. Tucker can be heard admonishing another woman, Stephanie Mitchell, for "...getting in our way while we were trying to park," before she lunges towards Sharpe, shouting: "Don't you take a picture of me, you do not have the right to take a picture of me."

Tucker's son then attempts to forcibly grab the phone from Sharpe, causing further consternation in the restaurant. There is a physical struggle involving several individuals, and Sharpe can be heard telling Tucker: "I’m pregnant. Look at me, I’m pregnant. You’re pushing a pregnant lady."

Bibb County jail records show that police arrested Tucker at 8:22 P.M. on 14 April 2018 before releasing her three hours later on a bond of $650. She has been charged with simple battery.

In an incident report sent to us by the Bibb County Sheriff's Office, a sheriff's deputy noted that the fight had started after a dispute over a parking spot.

After the women walked into the restaurant, Mitchell said Tucker's son approached them once again and called them "black lesbian bitches." The incident report adds:

Under Georgia law, simple battery occurs when one individual "intentionally makes physical contact of an insulting or provoking nature with the person of another" or "intentionally causes physical harm to another."

In general it is a misdemeanor offense, but when perpetrated against a woman who is pregnant at the time of the incident, it is categorized as a "high and aggravated" misdemeanor, which means that if Tucker is convicted of assaulting Sharpe, she could face up to 12 months in prison, and/or a fine of up to $5,000.

According to the incident report, Tucker told the sheriff's deputy that either Mitchell or Sharpe had, in fending off her attempts to snatch the cellphone, "grabbed Mrs. Tucker's arm and caused a scratch to the right hand."

However, the incident report also notes that at one point Tucker "lunged and struck Mrs. Sharpe in the face" and was "at fault" and the "primary aggressor."

"With all of the lunging and slapping happening, it was never shown through cell phone video that Mrs. Mitchell or Mrs. Sharpe did anything wrong. In fact, Mrs. Mitchell tried, without fail, to stop the attack on Mrs. Sharpe."

In a statement, a spokesperson for Darden — the company that operates the Cheddar's Scratch Kitchen chain of restaurants — told us:

We were appalled by the behavior of the individuals who confronted the two female service members. Such behavior flies in the face of our values and those individuals are no longer welcome in our restaurant.