Tide Pods and condom snorting are far from the first fake parental panics — are kids today really that stupid, or is it just the news outlets reporting on them? 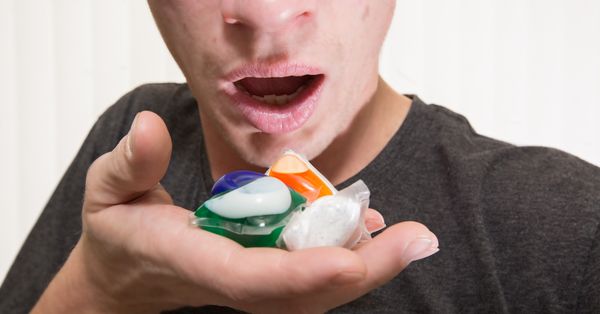 In 2018, media frenzies kicked up due to at least two "social media challenges" (involving Tide Pods and condom snorting) purportedly sweeping the nation.

Predictably, both Tide Pods and condom snorting became an indictment on the lamentable state of young people in the United States, all of whom clearly have nothing better to do than engage in ridiculous and potentially dangerous behavior.

Dozens of breathless local news stories warning parents about the "shocking trends" and "dangerous new fads" were inevitably followed by memes mocking young people these days. Despite neither challenge making any logical sense, social media users quickly and sanctimoniously developed an opinion about the alleged crazes:

Great, snorting condoms... because eating Tide Pods is so February. How does this become a thing? https://t.co/nAGFfegF4Y

This generation of teens really stupid af. When I was a kid I was playing outside or watching cartoons. Y’all eating tide pods and snorting condoms https://t.co/i1kCKbffkC

As we noted on our page about condom snorting, beneath the headlines is very little evidence many (if any) aspiring YouTubers were huffing prophylactics:

Mainstream news outlets reported on the condom snorting challenge in 2013, but the phenomenon was never that widespread and gradually petered out.

March 2018 saw an uptick in media coverage, but it wasn’t because people were snorting condoms again. The more likely reason was publicity surrounding a phenomenon that had gone viral a few months earlier, the so-called “Tide pod challenge,” which triggered safety warnings from poison control experts and led to a ban on videos of people eating laundry detergent.

As with the Tide pod challenge, the press went into full-on moral panic mode in their coverage of condom snorting.

But as our coverage also pointed out, the specter of millennial stupidity is chum in the water to many news outlets, quite a few of whom opted to cover the rumor as real news (without first appearing to investigate it at all.) On 2 April 2018, Newsweek and the Washington Post were among those reporting on the purported frenzy:

Imagine unrolling a condom and stuffing it up one side of your nose, then plugging the other nostril and inhaling until the long piece of latex slides into your throat. Then you reach back there with your fingers and pull it from your mouth.

Why would someone do that?

Apparently for the same reason young people have dared each other to pour salt in their hands and hold ice until it burns; douse themselves in rubbing alcohol and set themselves on fire; or bite into colorful liquid laundry detergent packets.

Nearly every outlet quoted Stephen Enriquez, a state education specialist and the apparent source for all information related to an epidemic of condom snorting:

“Because these days our teens are doing everything for likes, views and subscribers,” Stephen Enriquez, a state education specialist, told KPMH. “As graphic as it is, we have to show parents because teens are going online looking for challenges and recreating them.”

A day later, the Washington Post walked back their coverage with a slightly different take on the challenge:

Educators [in San Antonio] have given the same presentation to local schools for years. But something was different about this particular presentation: A local news crew was sitting in for a story. And soon, it wouldn’t be just those San Antonio parents who were alarmed. Terrifying headlines since that presentation have said the challenge was “every parent’s worst nightmare,” and “the latest dangerous social media trend” and “trending” among teens. The “condom challenge” was the next “Tide Pod challenge,” the memes went. Man, kids these days are sure dumb.

There’s just one small problem, however: Those headlines were wrong. The only thing viral about the condom challenge right now is the moral panic about the idea of teens doing the condom challenge. In a matter of days, word spread from a single local news report to a small army of local and national publications across the world, all warning about a challenge that, in 2018, barely exists.

The second Washington Post piece also noted that reports of laundry detergent pod poisoning were actually down around the time teens were purportedly shoving Tide Pods in their faces en masse. Wired observed that if a challenge existed, it seemed to be among adults either swallowing the shady story without question or news outlets looking to flog "Tide Pods, The Sequel" for infinite clicks:

If you dig back into the coverage, you eventually realize that there's no actual trend underneath the stories—it's just trend pieces all the way down. As The Washington Post reported earlier this week, the organization Enriquez works for has been using the same curriculum for years. Even the original news report, by San Antonio Fox affiliate KABB, never calls it a trend. Yet, publications from Newsweek to Fox to Yahoo called it one, pretty much just because they could find evidence of multiple teenagers snorting condoms. Nor did it stop with US media: America’s Condom Snorting Challenge panic, we regret to inform you, is actually international news.) It was so perfect a trend the internet practically willed it into being.

Thus is the price of the attention economy: If it looks like a trend, you can use it to feed the ravenous maw of the internet. And as with the Tide Pods debacle, reporters evinced that they've become over-reliant on social media to tell them what to write about. When Complex or a local ABC affiliate picks up a story, that compels the Foxes and Yahoos to tell you to look at the thing everyone else is looking at. Some are still publishing stories describing the Condom Snorting Challenge as a real trend. Many people will never even know it was fake.

It seemed that for the first time, outlets noticed the existence of a non-trend. Several linked back to our original condom challenge fact check, but few noted that the trend-of-not-a-trend came well before Tide Pods. Here are just a few of our favorite past panics:

The 72-Hour Challenge (or the Game of 48) was a purported social media fad by which teens sought to upset their parents by disappearing for two to three days. Not content with the originally upsetting premise, adults and the news media added a twist involving a leaderboard of which kids frightened their parents or guardians the most.

If snorting condoms wasn't stupid enough, the paracetamol challenge (involving what is known as acetaminophen in the United States) supposedly involved taking potentially-fatal doses of a drug with no recreational properties. Of course, nothing indicates that even one youngster participated in this "challenge."

According to the one guy cited as a reference for the prevalence of the condom challenge, kids are motivated to engage in dangerous stunts for likes, upvotes, and viral popularity. However, in the case of the Blue Whale "suicide game," those incentives were mitigated by the presumptive deaths of players.

Although there's no high associated with rubbing Burt's Bees lip balm on your eyelids (just trust us on this one), plenty of people spread warnings claiming that was exactly what kids were getting up to.

Before bug spray, kids in 2014 were allegedly attempting to get high by "smoking bedbugs." Any parents concerned about bedbug highs might first be advised to de-louse their dwellings.

Nearly a decade ago, parents were convinced teens were wasting their limited access to alcohol on vodka-soaked tampons. Even if teenagers didn't consume illicitly-obtained booze like people of age did, anyone who has used a tampon knows that they're difficult to operate when saturated.

The early days of the internet spawned one of the first web-based parental panics — sex bracelets. As we noted on a page first published in 2003:

The adults who write almost always say their kids are never going to wear those bracelets again; on the other hand, almost without exception, the middle- and high-school kids from all across the U.S. express shock that adults would think they were actually obeying this “code” and disappointment that their elders fail to understand the bracelets are no more than a cool fashion accessory that has attracted a silly rumor.

In the intervening years, not much has changed about what "kids today" are or aren't doing in terms of misbehavior that appears to have been concocted and promoted almost entirely by adults. However, an uptick in viral news and trending topics is certainly encouraging bad behavior — mostly among media outlets who run with fanciful claims of teen behavior before bothering to check whether kids are in fact smoking, snorting, planking, or sexting any variety of objects in real life.