A collection of the best japes sprung on unsuspecting internet users as part of the annual April Fool's Day tradition. 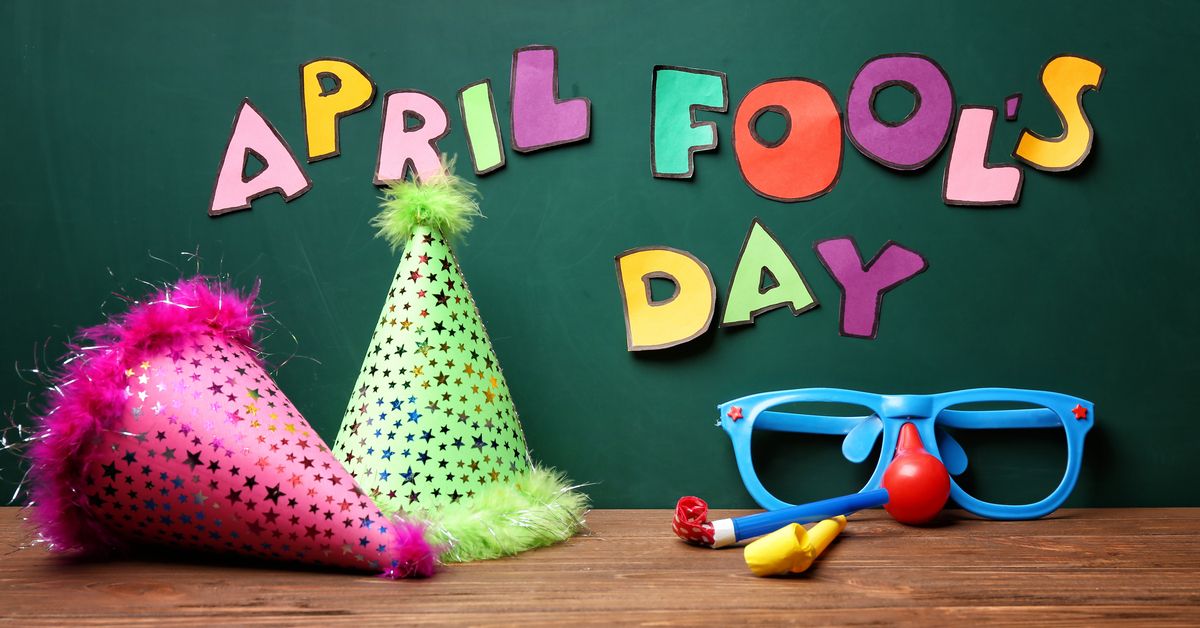 We spend 364 days of the year trying in vain to stop the spread of fake news. But today, April Fool's Day, we celebrate it. You can check out some of our favorite pranks in the history of the holiday, such as the London’s Capital Radio 1979 announcement that April 5th had been cancelled, the BBC's video report of a Spaghetti harvest in 1957, or Burger King's infamous "left-handed" whopper of 1996, in this article. Or read more about the holiday's history here.

But for now, let's take a look at some of the April Fool's Day jokes passed around in 2018:

President Trump Is Constructing a Monument to the War on Christmas

The Secular Coalition for America published a hoax article reporting that the Trump administration was planning to construct a monument “hailing the end of the War on Christmas”: Richard Branson’s Virgin Voyages brand is looking to break into the yet untapped industry of ocean-based wifi. If successful, this will extend the already “everywhere internet” culture to the one place on earth most people have not had regular access to it: under the water.

Why spend years studying a new language when you can just pop open a nice cold Brewolingo? The foreign language learning service pranked their users this year with the announcement of a beer that helps make drinkers fluent in a new language: Tieks Is Giving Away a Free Bunny with Every Purchase

Tieks became a one stop shop for ballet flats and bunnies this April Fools' Day:

While it may have sounded like a great deal, those who attempted to select their new hare-y friend were greeted with a message explaining that the "buy one get bunny" promotion was just a joke:

Thanks for your enthusiasm for our bunnies! While we don't think live bunnies for Easter are a good idea, we've donated to the ASPCA in your honor to help shelter animals of all kinds. Be sure to let your friends know about our gift with purchase.

Shades of Maxwell Smart -- the next revolution in mobile technology, and footwear, is here! According to a new faux advertisement from T-Mobile, the first ever SmartShoePhone will change the way you walk and talk on your phone:

This year's April Fools' Day happened to fall on Easter Sunday, so it wasn't surprising to see a few companies incorporate bunnies into the  pranks. FreshDirect, for example, published this video touting their new rabbit-forged herbs:

There's no need to worry about "porch piracy" when ordering your next Man Crate. The company released this entertaining video showcasing their latest free service: Porch Piracy Protection. Every Man Crate order, according to the fake viral advertisement, now comes with a choice of theft deterrent, such as a hive of bees or a screaming baboon:

Chocolate cake bun with vanilla frosting -- on a Burger King Whopper? In the chain's words at the end of the prank video, "maybe." (So, almost certainly not.) The clip was copied and spread by Facebook pages without mention of the date or purpose for the video:

The official Twitter account for the United States Marines Corps sent out a message informing readers that the term "Drill Instructor" was being replaced with the term "Drill Sergeant." Those who clicked a link to the accompanying article, however, were greeted with an April Fools' Day message: A team of researchers did not unearth the remains of a fictional porg from the Star Wars franchise:

A Kraken Was Pulled Out of the Thames River

Speaking of things that were not discovered ... A fake news report about the discovery of a Kraken, a mythical sea monster, was actually a viral advertisement for rum:

Most of the April Fools Day jokes on this list were pretty easy to spot, but fake news report from The Observer about Brexit and Remain emojis fooled (briefly) a couple of BBC reporters:

A story in The Observer about Brexit emojis fooled the BBC Breakfast team.

The presenters realised they'd fallen for the April Fools fake story after viewers pointed out what reporter Scherzo Primavera's name means in Italian: Joke of spring.

Don't expect the Brexit Bulldog and Starry Blue emojis to pop up on your phone anytime soon: Mayonnaise is good. Chocolate is good. So why not chocolate mayonnaise (possibly for your Chocolate Whopper)? Heinz UK concocted a batch of the curious condiment for their holiday joke this year:

The Coca-Cola Company also touted a few odd flavor combinations. In an attempt to reach millenial soda drinkers, the soda company joked that it was releasing avocado, sourdough, and charcoal flavored soft drinks: "Not only do they promise to be the perfect tasty, sugar-free refreshment, but they’ll also double-up as the ideal accessory for any brunch time social media photo – guaranteed to see the ‘likes’ rolling in."

Why drink it when you can bathe in it? That seems to be the premise of SodaStream's latest faux product, the SodaSoak:

Playstation the Board Game?

Gaming graphics have come along way since the first PlayStation was released in 1994, but the veteran video game company announced some frivolous plans to get back to the roots of home entertainment: Board games.

While Playstation looks to the past, Sprint is looking to the future with their new, innovative, game-changing, and completely fictional network-expanding soccer ball:

We bet that this "Well Done" recipe for a cold hot dog pie would go great with a heaping side of some chocolate mayonnaise...

Don't let sore elbows slow you down. This Jager Balm will ease the pain of making Jager Bombs:

How much of your bed do you use when you sleep? If you don't want that unused mattress space to go waste, you can sign up for ShareBed, a new sharing service from Lucid Mattress:

The Grand Canyon is hundreds of miles long, more than a mile deep, and stretches nearly 20 miles in width. So when the National Park Service announced that it had discovered a sinkhole that was expected to grow to about the same size, well, we were a bit worried. Thankfully, it was just another joke:

For the latest information on the Great Canyon, don’t check back here. This entire story has been an April Fools’ Day joke! As far as we know, there aren’t any massive sinkholes hiding in the Smoky Mountains. To learn real facts about the national park, check out our guide to 9 Things You’ll Only Find in the Great Smoky Mountains.

An Elephant Carrying a Lion Cub?

Kruger Sightings sent out this photograph last night that is either a realistic rendering of an upcoming Disney film, or a photoshopped prank. The tweet ends with a hint: Sloof Lirpa (or April Fools backwards):

We were following a lioness carrying her cub & she was getting really tired. An elephant showed up wanting to help the lioness. The elephant put its trunk down, the cub jumped up & the elephant carried the lion cub!!⁰S28, 3km from S entrance
Tinged by Sloof Lirpa pic.twitter.com/aebvHwtrv5

Lin-Manuel Miranda Adapting 'The Room' Into a Musical?

The entertainment news site Theater Mania scored an "exclusive" on a project that promised to meld the sublime with the ridiculous -- Hamilton creator Lin-Manuel Miranda collaborating with director Tommy Wiseau on a musical adaptation of Wiseau's cult film "classic" The Room. The post also included a picture of "star" Mark Rylance sporting Wiseau's signature long hair: But scroll past the song list (which includes, of course, a number called "You're Tearing Me Apart, Lisa") and the site admits that the story is a prank. Miranda himself credited Theater Mania editorial director Ashley Van Buren for coming up with the post but added, "WE REALLY DID watch The Room while workshopping Hamilton at Vassar."

A local news site, the Bangor Aye in North Wales, chimed in on the April Fools' fun by reporting that local researchers had managed to produce an actual Welsh dragon (matching the Celtic nation's flag): According to the story:

The first Welsh Dragon born in over 500 years has been successfully hatched at Bangor University.

Scientists managed to clone the Welsh Dragon after finding blood within mosquitoes that had been fossilized in amber. They then used the DNA from the dragon blood to complete the cloning process.

If the process described in that second paragraph wasn't enough of a clue, though, the site included quotes from "Dr. Henry Wu" and "Dr John Hammond" to confirm that the story is a riff on the film Jurassic Park.

Fans of horror novelist Stephen King might have gotten a thrill from the sudden appearance of King4Maine2018.com, a web site asking them to weigh in on the idea of the author entering the political arena and running to unseat Maine's Republican governor, Paul LePage. The site stated:

Friends and fans alike have been telling him that he could do the job better. He has taken that encouragement to heart and decided to test the waters, but would like your input.

The site then asked users to click on a campaign video to "send some feedback": In the most chilling resurrection since Pet Sematary, though, clicking through made users confront the revival of "Rickrolling," serenading them with the Rick Astley Internet-friendly chestnut "Never Gonna Give You Up": The "feedback" page also greeted users with the punchline:

Are you crazy?! Political office is one horror story that even Stephen King doesn't want to do. Happy April Fools' Day!

Captioned with a long "hmmmmmmmm":

Hmmmmmmmmmm.
Rated Red's Amanda Mertz (and former Monster Energy girl) weighs in on the bombshell news that NASCAR is going all-electric by 2021.

You can check out some of last year's best April Fool's Day jokes here.