Authorities in the UK say that anonymous mailings of fliers advocating violence against Muslims on 3 April 2018 have triggered a counter-terrorism investigation. 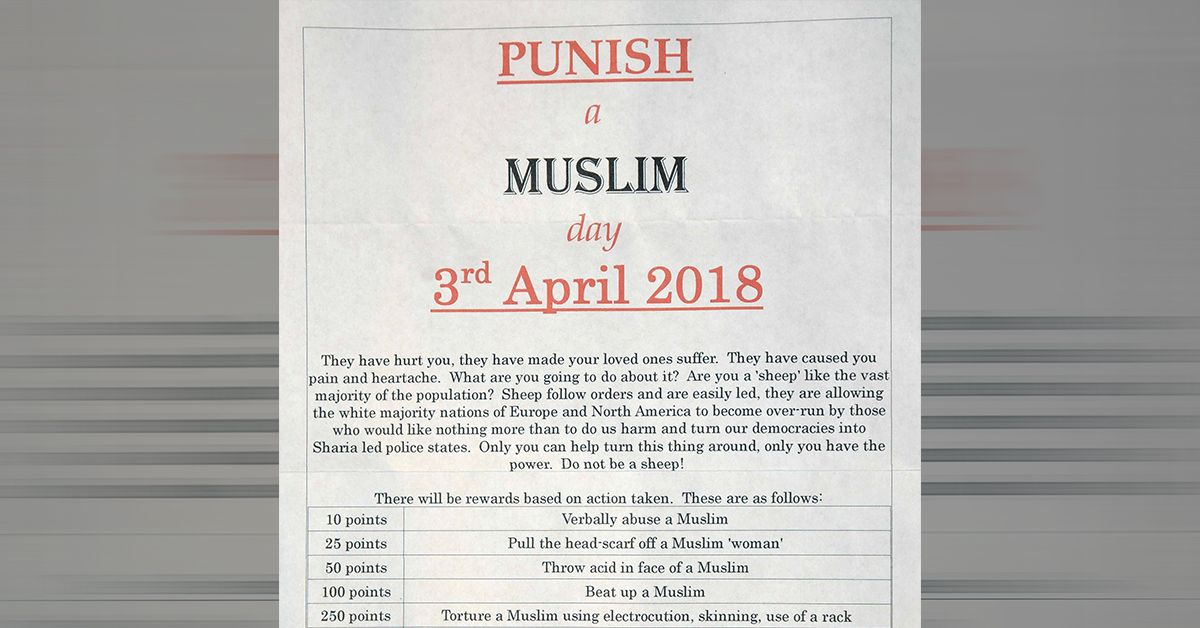 Fliers calling for violence against Muslims on 3 April 2018 (dubbed "Punish a Muslim Day" in the mailings) are being investigated as terrorist threats, UK law enforcement officials say.

The National Police Chiefs' Association issued a statement on 29 March, assuring the public that the threats were being taken seriously and measures were underway to protect potential victims from harm and bring any offenders to justice. Officials declined to publicize any details of the investigation so as not to jeopardize its success or increase the risk of violence.

Reports of the fliers, which were mailed to specific addresses around the U.K. without naming the addressees, first surfaced on 9 March 2018:

In addition to warning that the "white nations" of Europe and North America are being overrun by "those who would like nothing more than to do us harm and turn our democracies into Sharia led police states," the message offers point rewards for violent actions against Muslims:

They have hurt you, they have made your loved ones suffer. They have caused you pain and heartache. What are you going to do about it? Are you a ‘sheep’ like the vast majority of the population? Sheep follow orders and are easily led, they are allowing the white nations of Europe and North America to become over run by those who would like nothing more than to do us harm and turn our democracies into Sharia led police states. Only you can help turn this thing around, only you have the power. Do not be a sheep!

There will be rewards based on action taken. These are as follows:

According to the Tell MAMA (Measuring Anti-Muslim Attacks) web site, copies of the flier were received in London, the Midlands, and Yorkshire. Owners of the web site said they are working closely with police to track the mailings. Images of the flier have also been distributed on social media platforms.

A Tell MAMA post on 9 March noted similarities between the "Punish a Muslim Day" fliers and a series of hate letters sent to mosques in the UK and the United States in July 2017. Among their shared features are the use of sword imagery and threats of violence against Muslims.

Assistant Chief Constable Angela Williams of the West Yorkshire Police released a statement on 12 March assuring the public that all appropriate measures were being taken to prevent violence:

We are aware of a number of reports of potentially malicious communications having been sent to individuals in West Yorkshire and across the UK.

The investigation into these instances is currently being co-ordinated by the North East Counter Terrorism Unit (NECTU) and these enquiries are on going.

What I want to do is to reassure the communities of West Yorkshire that these communications are being taken extremely seriously. We understand that they may have caused concern and upset to people, especially the more vulnerable members of society.

We are working with the communities we serve to reassure residents that, as always, everything possible is being done to ensure their safety and to catch the person or persons responsible for this. Public safety remains our priority and I would urge our communities to be vigilant but not frightened. If you see anything suspicious please call police on 101 or if it is an emergency, 999.

A 27 March update from the BBC said police in Scotland were investigating the possibility that a recent spike in Islamophobic hate crimes in Glasgow were related to the fliers, although none were known to have been received there. The incidents ranged from a schoolgirl being asked if someone could take a video of themselves ripping off her hijab to physical and verbal assaults on Muslims in public places.

U.K. victims of hate crime threats or violent incidents are urged to report them to authorities via the Metropolitan Police Service web site or by contacting their local police directly.

Although there had been no reports of "Punish a Muslim Day" fliers being distributed in the United States (apart from social media postings) as of 28 March, at least one school district superintendent (in Vermont) said he planned to send a memo to parents alerting them to the threats just in case. Subsequent press coverage indicated that fliers were being "received" by members of some U.S. communities, though it was unclear from the reporting whether those were distributed as hard copies or online.

Update [3 April 2018]: Added mention of press reports of fliers received by members of some U.S. communities.