Although we don't know if people using social media to harass massacre survivors are all NRA members, many of them are tagging the NRA in threatening posts. 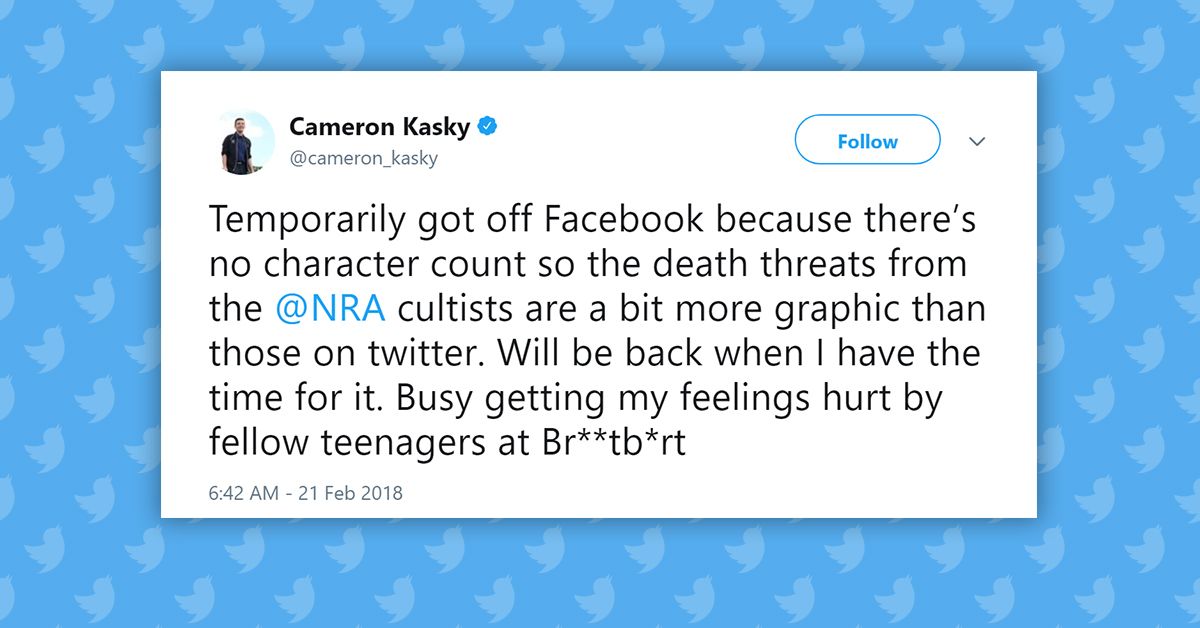 In late February 2018, as students from Marjory Stoneman Douglas High School in Parkland, Florida, have become vocal advocates for stricter gun laws in the wake of the mass shooting there that left 17 people dead, a familiar pattern has emerged: Online conspiracy theorists have stalked and harassed the teens, saying they are not survivors of a massacre but crisis actors in a "false flag" operation.

"False flag" has become a common buzzword among those who comb the Internet for evidence that the government is engineering a series of fake crises such as mass shootings, with the end goal of creating an autocratic one-world government that supersedes nation states. Some of the survivors of the Parkland shooting have been sent death threats. For example, Cameron Kasky, 17, reported that he had received "graphic" threats on Facebook:

Temporarily got off Facebook because there’s no character count so the death threats from the @NRA cultists are a bit more graphic than those on twitter. Will be back when I have the time for it. Busy getting my feelings hurt by fellow teenagers at Br**tb*rt

It's difficult to determine if NRA members are actively targeting the surviving teens, although apparently ardent supporters of gun rights are coming out of the woodwork to emerge on social media. The gun rights organization claims to have more than 5 million members but doesn't publish a membership list, so no straightforward way exists to ascertain whether various online harassers are actually members of that group. (We have sent a request for comment to the NRA and are awaiting a response.)

Whether or not some of the harassers are card-carrying members of the NRA, the pattern of harassment is not new or unique. Ryan Graney is a volunteer media representative for the family of Victoria Soto, a teacher who was killed while shielding her students from a gunman during the 2012 Sandy Hook Elementary school shooting in Newtown, Connecticut. Graney says she has for years monitored the types of people who harass mass shooting victims and their families.

More than five years after the Sandy Hook massacre left 26 dead, Graney said the Soto family still gets death threats from trolls who don't believe Victoria Soto was a real person. Graney was recently forced to report a woman to authorities after she threatened she was "going to Newtown with a gun and finishing the job." Graney told us: "They think these [survivors] are committing a mortal sin by being crisis actors and they deserve to die for defrauding the government and the American people. I don’t even know how you would make that connection, but they’re so angry. They feel that the country and government have a vendetta against them and these people were sent here to fulfill that vendetta and they must die now."

David Hogg, 17, who has emerged as a vocal activist for more stringent firearms regulations after surviving the Parkland massacre, has in particular been a target for internet harassment and death threats. (The account referenced in the below image has since been suspended by Twitter): Hogg's mother, Rebecca Boldrick, confirmed to the Washington Post that her family has received death threats. In response to far-right bloggers and trolls who cited the supposed "red flag" that Hogg's father works for the FBI, Boldrick clarified that Kevin Hogg was an agent at airports in Los Angeles and Florida before retiring for medical reasons.

Numerous readers have asked us whether those sending death threats are National Rifle Association (NRA) members, because many of those using social media to harass the survivors have tagged the NRA in messages or responded to NRA tweets:

And here's a few more pictures of Phelps/Sexton crisis actors, who will undoubtedly collect a small fortune from the Go-Fund-Me Donations... pic.twitter.com/jHoRx9q4ty

Soros, Obama & Killary are all grinning on the sidelines. Sad. pic.twitter.com/QPwcbcfa5w

Graney told us conspiracy theorists focus on inane details, such as the color of clothing worn by survivors, which they believe denotes their membership in certain branches of government. They'll also look at displays of any human emotion other than devastation as evidence that survivors are not truly grieving:

All smiles from the Hogg. pic.twitter.com/2ej1XFJQvm

That feeling when you get famous because all of your classmates died.

Anyone else think it’s weird how happy these kids are?pic.twitter.com/pmH2jPEnQM

Graney says recent announcements by social media platforms of new efforts to tamp down the spread of viral hoaxes and harassment after tragedies has made her optimistic. But she pointed to a private Facebook group where Sandy Hook "truthers" have for years been coming up with outlandish fictions about mass shootings and victims. Here's an example of one such post in the group: We sent inquiries to Facebook and Google asking how they plan to address these issues on their platforms and have not yet received a response. Although Twitter vowed to take steps that would protect the Parkland survivors from such abuse, many accounts spreading falsehoods about the high school students are still active:

David Hogg’s dad is FBI. David Hogg is a crisis actor who forgot his lines. This is an election year after all and they coming for your guns. #parklandshooting #crisisactors #davidhogg #falseflag #secondamendment #fakenews pic.twitter.com/b1uNxLW7zH

David Hogg's dad works for the FBI so he probably staged the entire death threat scenario, to gain sympathy from the people who watch CNN.

Hopefully the POTUS doesn’t cave to the #CrisisActor and make it 21 to buy an assault rifle. We will simply have to discharge every service member under 21 then. #MAGA #NRA . Make it 21 to buy tide detergent too. And 21 to buy a ? that’s a deadly weapon as well. #Parkland pic.twitter.com/zw0tslNoNR

Timberg, Craig et al.   "How a Survivor of the Florida School Shooting Became the Victim of an Online Conspiracy."     The Washington Post.   21 February 2018.