The chief executive visited Maddy Wilford in the hospital shortly after a high school shooting that left 17 dead. 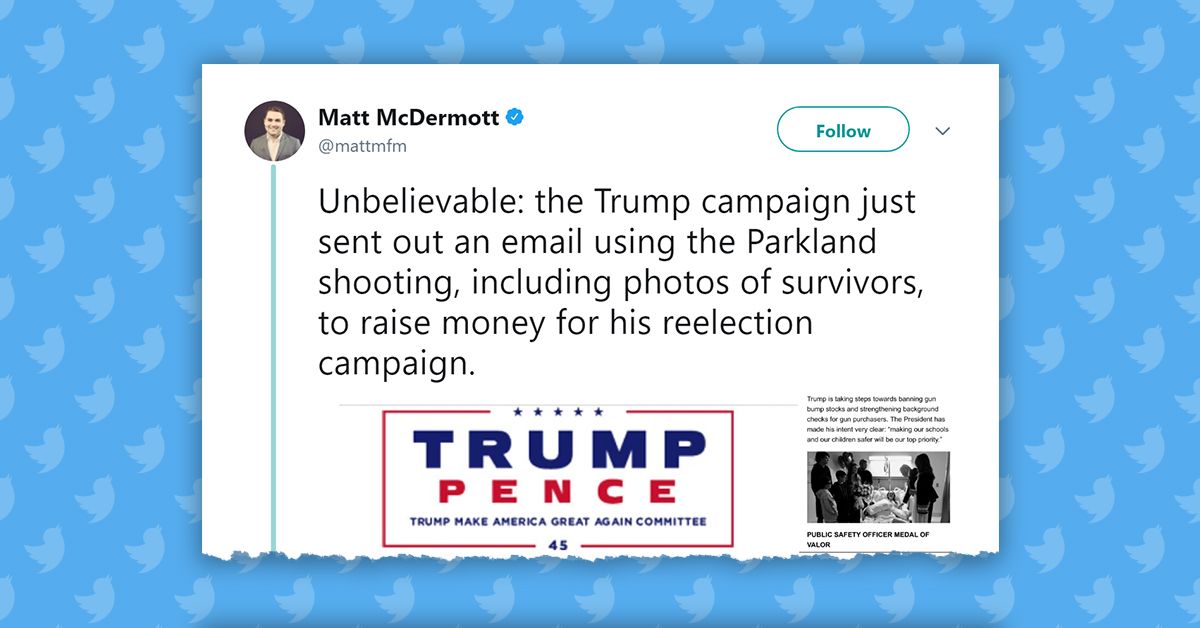 President Donald Trump's reelection campaign generated controversy in late February 2018 when they used a photograph of the chief executive visiting a victim of the school shooting that took place in Parkland, Florida, earlier that month. Matt McDermott, a political pollster, tweeted screenshots of the email message on 24 February 2018, the same day it was sent out to supporters:

Unbelievable: the Trump campaign just sent out an email using the Parkland shooting, including photos of survivors, to raise money for his reelection campaign. pic.twitter.com/2WInImvsIA

We reached out to McDermott, who forwarded us a copy of the fundraising email.

FEBRUARY 16, 2018‪ Our entire Nation, with one heavy heart, continues to pray for the victims and their families in Parkland, Florida. To teachers, law enforcement, first responders and medical professionals who responded so bravely in the face of danger: We THANK YOU for your courage — and we are here for you, ALWAYS! Our administration is working closely with local authorities to investigate the shooting and learn everything we can. We are committed to working with state and local leaders to help secure our schools, and tackle the difficult issue of mental health. God Bless You All — and THANK YOU!

The photograph that accompanied the fundraising message showed President Trump visiting Maddy Wilford, a Margory Stoneman Douglas High school student, as she recovered in the hospital. After Twitter users shared screen captures of the message, which included links for donating and visiting an online store, debate ensued about the propriety of using a shooting victim's image in conjunction with a fundraising effort.

CNN also reported on the use of Wilford's photograph:

President Donald Trump's re-election campaign used a photo of a survivor of the Parkland, Florida, shooting in an email that asks its recipients to donate money to the campaign.

The email contains a photo of 17-year-old Madeleine Wilford in a hospital bed surrounded by her family, Trump and the first lady. The President visited Wilford on February 16, two days after the attack at Marjory Stoneman Douglas High School, which left 17 dead.

McDermott later reposted a tweet he wrote shortly after the 2017 Las Vegas massacre, in which he took the Trump campaign to task for "actively fundrais[ing] ... off [a] mass shooting":

Maddy Wilford was discharged from the hospital on 21 February 2018.