How Long Does It Take to Buy an AR-15 in the United States?

The time it takes varies from state to state, but you can buy an assault rifle in less than an hour in various parts of the country. 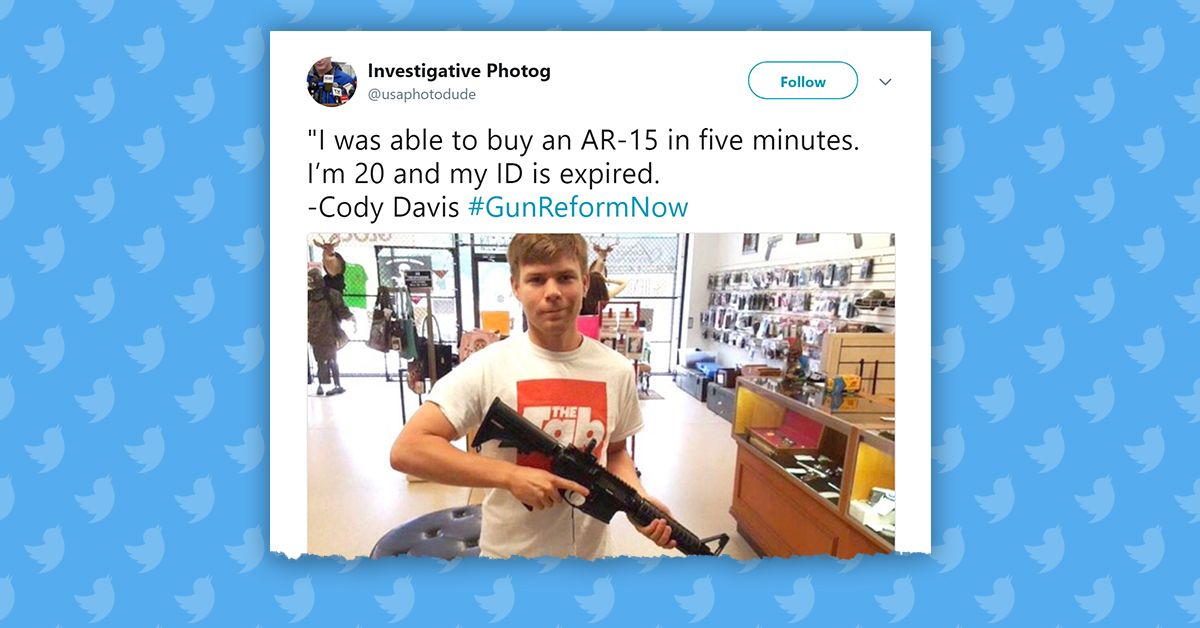 In February 2018, just days after a gunman murdered seventeen people at a high school in Parkland, Florida — with firearms that he obtained completely legally — a photograph of a young man holding an AR-15 was passed around the Internet alongside a claim that he had purchased the weapon in just five minutes:

"I was able to buy an AR-15 in five minutes. I’m 20 and my ID is expired.
-Cody Davis #GunReformNow pic.twitter.com/TFd1dwCwHV

This photograph and claim come from a 2016 article published by the college-focused news site The Tab, headlined "I was able to buy an AR-15 in five minutes." That headline was slightly misleading, however, as the text of the article made clear:

After he walked me through the paperwork, all five pages of it, I told him I changed my mind and wanted to think more before I bought an AR-15. He told me it wasn’t a problem and listed the store hours if I wanted to come back. I then said thank you and walked back to my car.

Seconds. It took seconds for the salesman to take an AR-15 off the shelf and begin selling it to me. If I had stayed for maybe three minutes longer to fill out less paperwork than I did for the hiring process at my school’s bookstore, I would’ve driven home with an AR-15.

Conservative outlets rushed to "fact check" the article and label it as "fake news," since the writer, Cody Davis, did not actually go through with the purchase.

These same outlets failed to mention, however, that even though Davis walked out of the store without a gun, Americans can buy an AR-15 within minutes in many states. In June 2016, shortly after a gunman killed 49 people at a nightclub in Orlando, a reporter from the Huffington Post purchased an AR-15 in under forty minutes:

Waiting for the background check was the hardest part — and that only involved a few minutes of idle time. We requested data from the state Department of Law Enforcement on the current volume of background checks for similar guns, but did not get an immediate response. The department has been overwhelmed by public records requests since the shooting, a spokeswoman said.

Nothing that we or the store employees did was illegal or unusual. You can buy semi-automatic rifles at several stores in the Orlando area.

A Philadelphia-area journalist also reported that she was able to purchase an AR-15 in Pennsylvania in the aftermath of the Orlando shooting, and that the background check took only seven minutes:

I felt a little squeamish about not telling him who I was and what I was trying to do, but this wasn't about them; they weren't doing anything illegal. The truth is that I could have bought the gun as easily in any gun shop in Pennsylvania. I just didn't realize how easily.

Go to a licensed gun store. Fill out about a page and a half of forms. Wait (if that's really the right word for it) for an instant background check, and then pay the man. I told the guy I was on a budget, so I got an AR-15 for $759.99. God bless America.

No need for a concealed carry permit. No mandatory training, though the guys did give me a coupon for a free day pass for a local gun range. No need for even a moment to at least consider how gross all of this felt as relatives of the dead were still being notified.

To be fair, there was an extra 10 or 15 minutes or so of chitchat inside the gun store before I walked out with a cardboard box with the words Smith & Wesson emblazoned on it, and an atta-girl for thinking ahead and buying the most popular rifle in the country before there's a run on the gun from nervous gun owners who fear a ban on them.

In the wake of the 14 February 2018 mass shooting at Marjory Stoneman Douglas High School in Parkland, Florida, a number of reporters published similar stories. An Arizona reporter for ABC 15 said it took about ten minutes to pass a background check. Other outlets also ran stories about similar experiments in Pennsylvania, Michigan, and Iowa, all resulting in people walking out of stores with assault rifles in less than an hour. In Florida, Moti Adika, the owner of a gun store within a mile of Marjory Stoneman Douglas, told CBS News that "if you're a law-abiding citizen," it should only take about quarter of an hour to purchase an AR-15 at his store.

Pennsylvania, Iowa, Michigan, and Arizona have no legally mandated waiting periods for citizens who buy guns. However, that is not the case in all states. A gun store in Illinois, for instance, informed us that there is a 24-hour mandatory waiting period before one can purchase a firearm in the state. California has an even longer waiting period (ten days) and Hawaii requires potential gun owners to wait two weeks before obtaining a firearm. Rhode Island and Washington, D.C. also have a mandatory "cooling off" period for all firearm purchases.

In Iowa and Florida, there is a waiting period for handguns, but not for assault rifles.

The presence of a gun dangerously compounds the risk of impulsive acts of violence, especially suicide. Waiting periods, or “cooling off” laws, create an important window of time for gun purchasers to reconsider their intentions, which can lead to a change of heart and a saved life. In addition, waiting periods provide additional time for the completion of a thorough background check.

There is no federal waiting period. Under the National Instant Criminal Background Check System (NICS), a dealer may transfer a firearm to a prospective purchaser as soon as he or she passes a background check. If the FBI is unable to complete a background check within three business days, the dealer may complete the transfer by default.

Some states, like New Jersey, also require gun owners to have a license before they can purchase firearms. Others, including New Jersey and Maryland, ban the sale of assault rifles altogether.