Can Tamiflu Cause Children to Become Homicidal?

Psychiatric problems are possibly associated with the anti-influenza drug Tamiflu, but causation and association are difficult to tease apart. 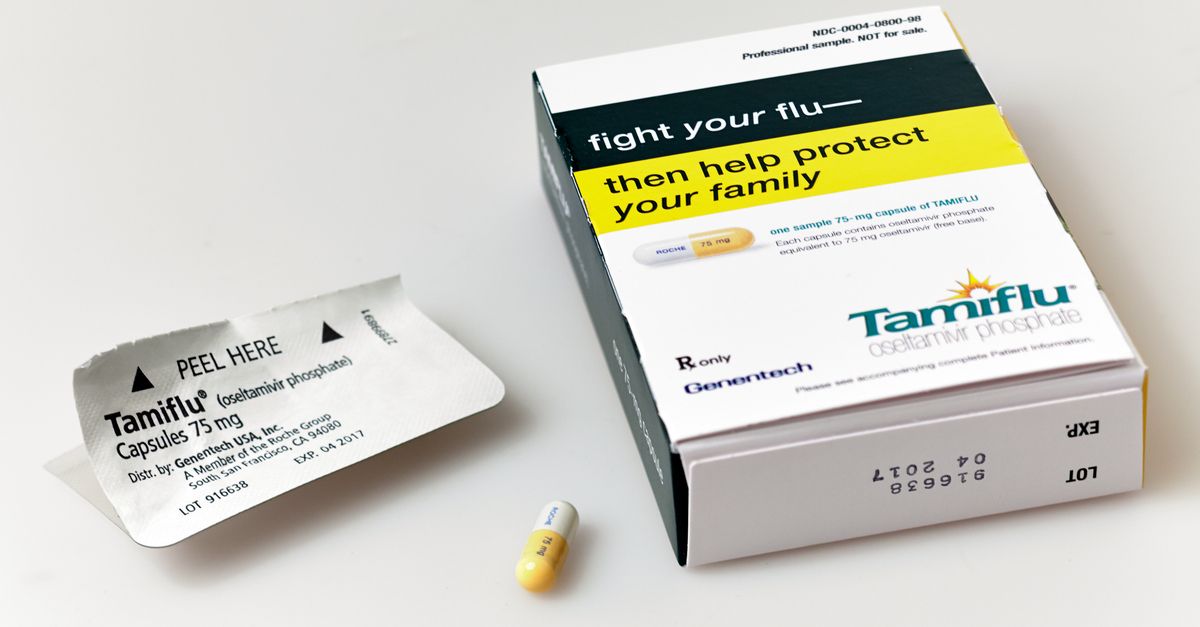 On 26 January 2018, a Facebook user posted a harrowing account of her daughter suffering  from apparent psychiatric side effects brought on by the antiviral drug Tamiflu:

Last night my daughter tried to kill me. [...] My evening started by coming home from work to find Emma with a fever of 103.1 and complaining of a runny nose. I gave her Tylenol, sent the boys to my mom’s house next door and took her to see her Pedi. Four hours later, they gave her another dose of Tylenol and we left with a prescriptions for Tamiflu and Ibuprofen after they diagnosed her for the flu by symptoms.

Prescriptions were filled, medicine was administered in my vehicle in the CVS parking lot (She still had a fever of 103 so I felt like she couldn't wait the 4 hours for her next dose) and we drove home. Within thirty minutes of her falling asleep, she woke up.  This is where my nightmare begins.

My daughter woke up but she wasn't herself. She woke up breaking things and came into my bedroom saying she was going to kill me.  After ten minutes of wrestling with her, trying to reason with her and wake her up from what I assumed was her sleep walking, her mood snapped and she began to cry stating, "Please, mommy, I'm so sorry. I love you but I can't wake up. The noise in head won't let me."

Our story does not seek to verify the specific claims of that event, but will instead discuss the general plausibility of an event like this being caused by Tamiflu.

Tamiflu belongs to a class of antiviral drugs called neuraminidase inhibitors, which prevent viruses from proliferating in the body by blocking their release from already infected cells. According to the Food and Drug Administration, it's approved for certain flu cases:

Tamiflu (oseltamivir phosphate) is an antiviral drug approved for treatment of uncomplicated influenza A and B in patients 1 year of age or older. It is also approved for prophylaxis (prevention) of influenza in people 13 years or older after household contact or at high risk for exposure during influenza season.

When the drug was first approved in 1999, clinical trials had indicated that the drug was well-tolerated with few serious side-effects. By 2005, however, numerous reports indicated potential severe neurologic or psychiatric side effects associated with the drug in children younger than sixteen, including those that could plausibly describe the event relayed in the viral Facebook post:

For reasons still not fully understood by the scientific and medical community, nearly all events with these symptoms were first described in Japan, where authorities eventually decided to caution against prescribing the drug to children aged 10-19 in 2007. A 2008 study, which was conducted by the manufacturer of Tamiflu, summarized all reports of "neuropsychiatric adverse events" (NPAEs) between 1999 and 2007:

After categorizing the reported events according to International Classification of Diseases (9th edition) codes, abnormal behaviour (1160 events, 38.0%) and delusions/perceptual disturbances (661 events, 21.7%) were the largest categories of events, and delirium or delirium-like events (as defined by the American Psychiatric Association) were very common in most categories.

Linking this broad range of psychiatric outcomes causally to Tamiflu, though, is problematic for scientists researching the drug’s safety. That’s because because influenza can cause similar effects on its own, and because Tamiflu is rarely the only drug a flu sufferer takes throughout the course of their illness.

According to the same 2008 review of the drug’s adverse events, the rate of neuropsychiatric events in people suffering from influenza while taking Tamiflu was statistically identical to populations of people with the flu who were not taking the drug. Those data also demonstrated that a person with the flu had a significantly higher risk of neuropsychiatric events compared to people unaffected by the flu:

The available data do not suggest that the incidence of NPAEs in influenza patients receiving oseltamivir is higher than in those who do not, and no mechanism by which oseltamivir or oseltamivir carboxylate [Tamiflu] could cause or worsen such events could be identified.

The conclusions provided by that study (as well as those of others that rely on manufacturer’s data) are a source of some controversy. Still, no studies — independent or otherwise — have indicated that neuropsychological events are a common side-effect. The Cochrane Library, which undertakes independent analyses of drug safety and efficacy, produced a 2014 study suggesting that Tamiflu's clinical trial data show a possible relationship between dose of Tamiflu and incidence of psychiatric events, though these data do not specifically concern pediatric patients.

A separate 2012 Cochrane review designed specifically to investigate the efficacy and risk of Tamiflu in pediatric populations did not find a significantly increased risk of psychiatric events. However, that study also questioned the efficacy of the drug for pediatric patients in general, suggesting the benefit provided by the drug for both prevention of the flu and its treatment was "modest."

Primarily as a result of these ambiguities, the FDA has advised since November 2006 that children and teenagers suffering from the flu "may be at a higher risk for seizures, confusion, or abnormal behavior early during their illness." The British National Institute for Health and Care excellence lists “altered consciousness” as an “uncommon” side-effect of the drug in children and adolescents.

Could these uncommon side effects describe what happened in the viral Facebook post? It’s possible, but by no means is it the only potential explanation.

Michiels, Barbara, et al.   "The Value of Neuraminidase Inhibitors for the Prevention and Treatment of Seasonal Influenza: A Systematic Review of Systematic Reviews."     PLOS One.   April 2013.