Young Cow Moves Out, Tours With Herd of Wild Bison

The cow appears to be thriving in its new life as a bovine interloper. 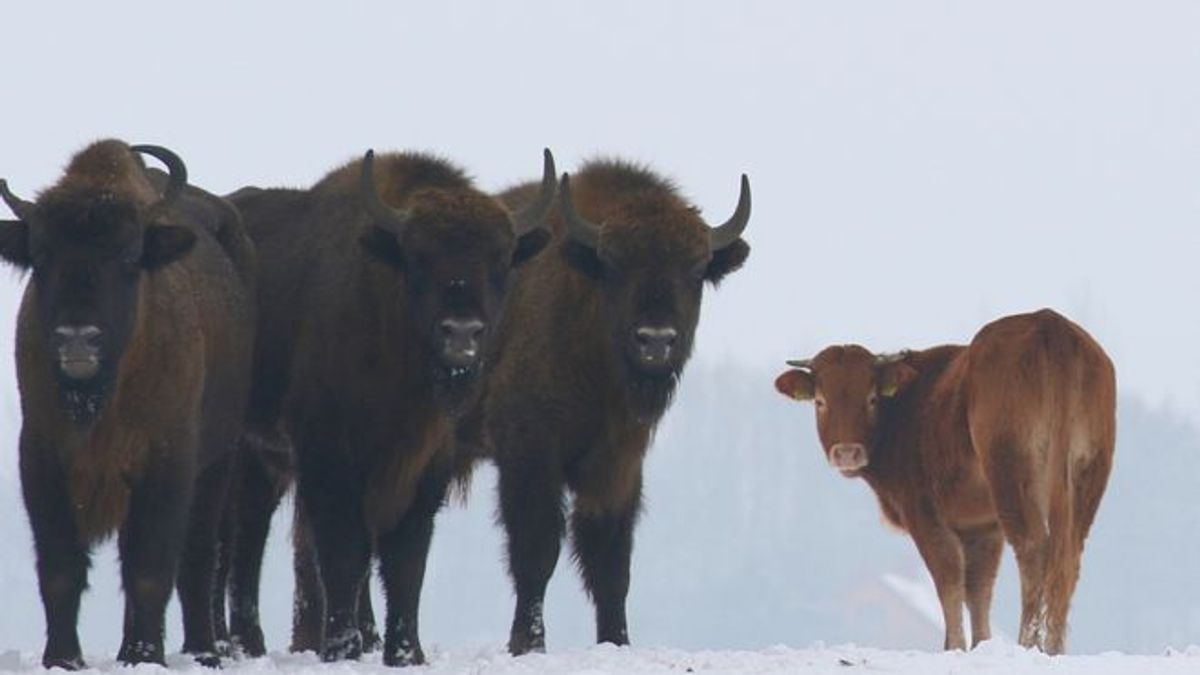 Sometime around late October, a freedom-loving cow escaped from her owner and, in the words of the BBC, took a walk "on the wild side" by joining a herd of bison living near Poland’s Bialowieza Forest.

The cow in question, a French breed called a Limousin cow, was first spotted by an ornithologist named Adam Zbyryt, who reported the curious presence of the brown bovine with the bison to Poland’s TVN24 in November 2017, telling reporters:

It's not unusual to see bison near the Bialowieza Forest, but one animal caught my eye. It was a completely different light-brown shade from the rest of the herd. Bison are chestnut or dark brown.

Three months later in late January 2018, with winter in on its way out, the cow was spotted again, this time by biologist Rafal Kowalczyk, who described the sighting in another TVN24 story published on 23 January 2017. Kowalczyk reported that the cow appeared healthy, though not fully integrated into the herd. He speculated that the herd could offer protection to the cow from the wolves that make the Bialowieza Forest their home:

Dr Kowalczyk told TVN24 that this is the first time he has seen a cow join a bison herd. "She is not very integrated with the group, as bison act like one organism and she stands out." He added that the herd had probably saved her from the wolves that prowl the edges of the Bialowieza Forest through the winter.

European bison (Bison bonasus) were once effectively extinct in the wild. It was, in fact, in the same Bialowieza Forest that captive European bison were first re-introduced into the wild in a (generally successful) effort to maintain a wild population of the creatures. Kowalczyk told TVN24 that he was worried more about the bison than the iconoclastic cow because of the possibility that the odd friendship might lead to mating (as they do), contaminating the genetics of this vulnerable bison population:

Although the cow may be out of danger, Dr Kowalczyk warns she could pose a threat to the bison themselves. The unusual friendship could lead to mating, which would contaminate the vulnerable population of about 600 Bialowieza bison with hybrids.

Hybridization between the European bison and European domestic cattle, which are separated only by about 10,000 years of evolution, is a well-documented phenomenon. In rare cases, such a union results in a creature called the Żubroń. (In North America, a hybrid between American bison and cattle is referred to as a cattalo.)

With a population of only 600 individuals, interspecies mating could significantly change the genetic makeup of what remains of this once effectively extinct species. Any Żubroń birth from a cow, as well, would likely have to be a cesarean section if either the mother or the offspring were to survive the birth.

The BBC reports that there will likely be an effort to recapture the cow and return her to her original home.