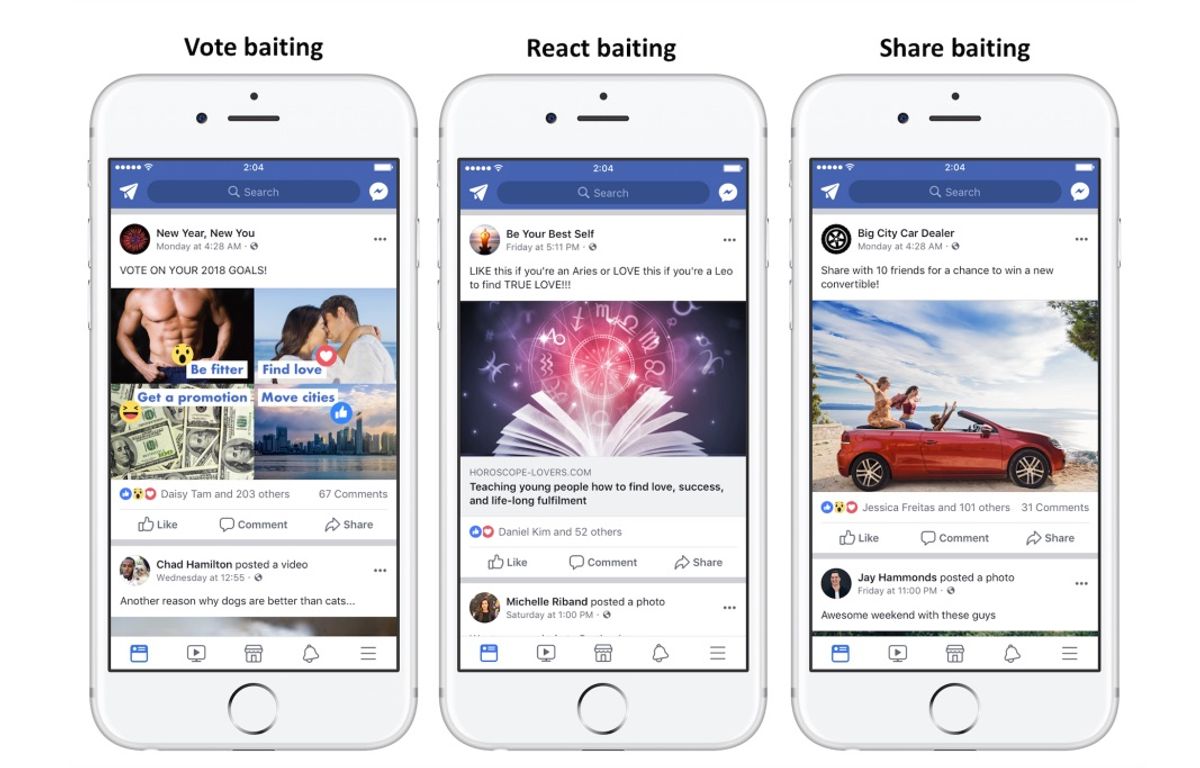 In a press release, the social network said that users had expressed distaste for "spammy posts [which] goad them into interacting with likes, shares, comments, and other actions."

The press release included as examples "vote baiting" (using Facebook reactions as an informal poll), "react baiting" (instructing users to like a post to express one reaction or share to express the other), and "share baiting" (a broader category where sharing of the post was putatively rewarded in the form of a contest or other inducement).

In addition, Facebook illustrated two other forms of engagement baiting, one which sought to generate engagement by asking users to tag friends, and the other soliciting specific comments to express a popular opinion: Oftentimes, the content in question is innocuous at first glance, simply asking users to weigh in on whether they liked a type of music or recognized a household object. Publishers using the tactic frequently post videos in which the image doesn't really move, due to their stronger algorithmic weight:

Although the term was rarely used prior to Facebook's announcement, "engagement bait" is a concept with which we at Snopes.com are deeply familiar. Content using such tactics often prompt a flood of reader inquiries about whether claims made in the posts are true, or whether liking and sharing items on Facebook can lead to receiving free stuff. Like-bait posts also often swap out their original content for scams once they have garnered enough likes.

The press release doesn't specifically mention "survey scam" coupon posts (about which we receive dozens of queries per week), but they will likely be affected by the algorithm change as well. Whether the move will truly slow the spread of engagement bait remains to be seen, but Facebook warned "[p]ublishers and other businesses that use engagement bait tactics in their posts should expect their reach on these posts to decrease."

However, your post asking friends to help you find a good dentist or donate money to your favorite cause will be unaffected, according to the social network. The press release noted that posts seeking "help, advice, or recommendations, such as circulating a missing child report, raising money for a cause, or asking for travel tips" would be spared.

Silverman, Craig.   "People Have Come Up With A Shameless Way To Generate Massive Video View Counts On Facebook."     BuzzFeed.   28 July 2017.