One lawmaker accused the territory's power company of ignoring its own lawyers while making the agreement. 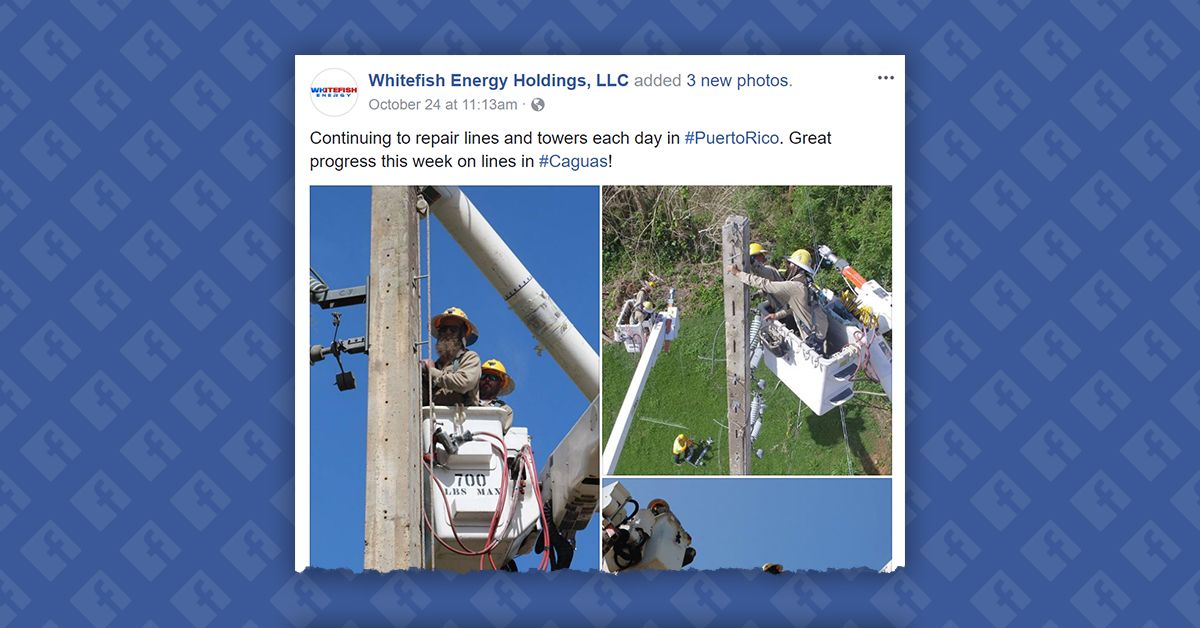 Puerto Rican government and utility officials are slated to testify before Congress, and newly-released documents highlight issues with the agreement with Whitefish Energy, a Montana-based company contracted to restore the territory's electrical grid in the aftermath of Hurricane María.

A day earlier, another report showed that Whitefish had been charging the territory $319 an hour for subcontracted labor, while paying the workers—many of whom were brought in from companies in Florida—as much as $63 an hour before mounting public criticism led to the $300 million contract being cancelled in October 2017.

Rep. Bruce Westerman (R-Arkansas), who chairs the House subcommittee on Oversight & Investigations, said in a statement:

It is obvious PREPA did not know how to draft a FEMA-compliant contract, nor did PREPA officials adhere to the advice of their own counsel on how to comply. I believe this is precisely why the oversight board should be granted more authority. While we understand the sense of urgency for the people of Puerto Rico, oversight and transparency are vital to this recovery process.

After the contract was signed, PREPA asked Whitefish Energy to change the rate structure of the contract to make it FEMA-compliant, meaning that there would be fixed rates for virtually everything (including lodging, food, fuel, etc.) rather than cost plus.

As of 14 November 2017, around 48 percent of the territory's electrical grid had been restored. That same day, Puerto Rico Gov. Ricardo Rosselló testified before the Senate Energy and Natural Resources Committee that 59 of Puerto Rico's 68 hospitals were receiving power through the grid, and that 839 schools in the area were open.

He also pledged, "I will lead the most transparent disaster reconstruction in American history."

Rosselló and Ricardo Ramos, PREPA's chief executive officer, are scheduled to testify before the House committee on 15 November 2017. Rep. Rob Bishop (R-Utah), who chairs the committee, said in a statement:

A legacy of dysfunction (at PREPA) has created a competence deficit that threatens the Island's ability to improve conditions for its citizens. Confidence in the utility's ability to manage contracts and time-sensitive disaster-related infrastructure work is long gone.

Under the terms of the contract, senior power linemen subcontracted by Whitefish from Florida companies were making $63 an hour. At least six other workers were making $42 an hour. While it is common for subcontractors to receive "markups" in their deals, the payment figures listed in Whitefish's deal with PREPA were "empirically questionable" even taking into account double-time wages for emergency work, said a former Florida Power and Light executive Jeffrey Bartel. He told The New York Times:

Possibly most egregious is that this all takes place with a dire and desperate circumstance where people's lives are at immediate danger without power, and, therefore, there is unequal bargaining position by Puerto Rico, which allows for the possibility of price gouging.

However, PREPA chief executive officer Ricardo L. Ramos denied that any wrongdoing was involved in the deal:

If people have the perception that there was an act of corruption where some benefited and became millionaires at the expense of the people of Puerto Rico, while they're all going through a humanitarian crisis, look, that's a huge offense.

In its statement, Whitefish Energy said:

Keep in mind that there were no "market prices" for this type of storm work on an island that had virtually no power and no external communications, and whose access roads and transportation infrastructure were destroyed. This, combined with PREPA's failure to maintain its right of ways, meant that the scope of work facing Whitefish Energy was unprecedented, as acknowledged by the U.S. Government. Even basics like finding housing for workers required enormous efforts to arrange clean and safe accommodations. Further, all workers, equipment, tools, food, water, etc. needed to be shipped to Puerto Rico where there was limited port and air space. Whitefish utilized local resources where possible and delivered on its promise to start performing work before any other contractor on that island mobilized.

The agency canceled the contract on 29 October 2017 amid scrutiny, but Whitefish will reportedly still be working on the island until 30 November 2017.

On 13 November 2017, federal District Judge Laura Taylor Swain ruled that the Financial Oversight and Management Board for Puerto Rico could not appoint Noel Zamot, a retired U.S. Air Force colonel, to take over management of PREPA.