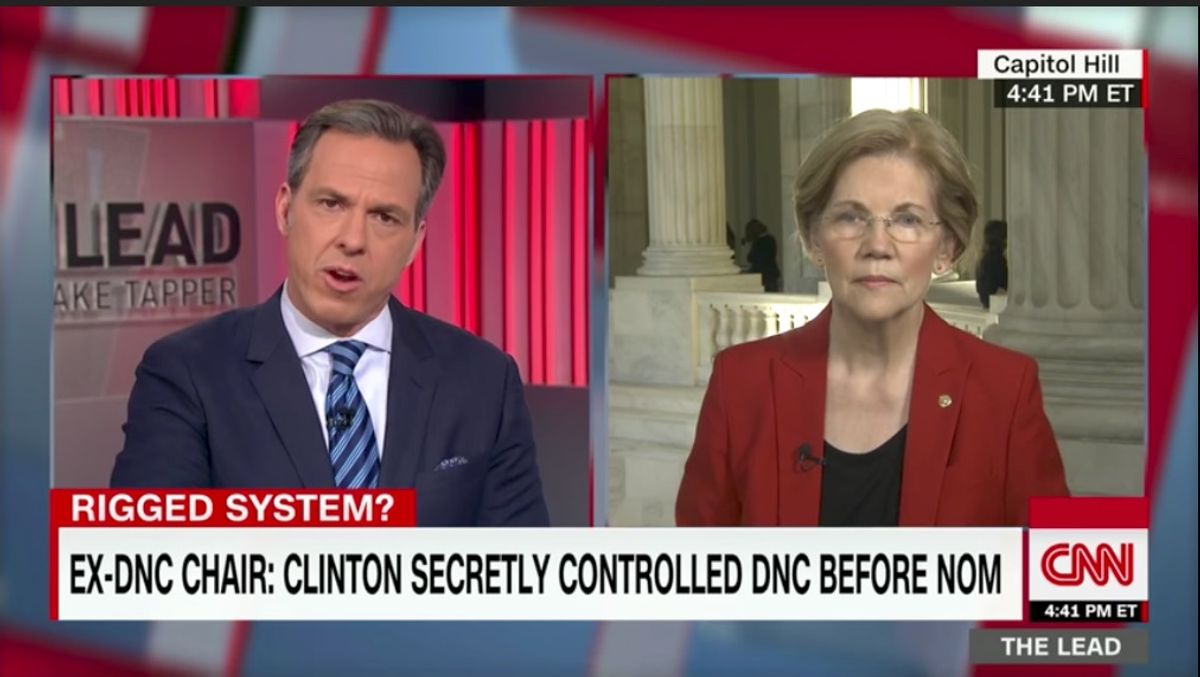 In a passage pertaining to the tense events surrounding the Democratic National Convention of 2016, the then-interim chair wrote:

I had promised Bernie [Sanders] when I took the helm of the Democratic National Committee after the convention that I would get to the bottom of whether Hillary Clinton’s team had rigged the nomination process, as a cache of emails stolen by Russian hackers and posted online had suggested. I’d had my suspicions from the moment I walked in the door of the DNC a month or so earlier, based on the leaked emails. But who knew if some of them might have been forged? I needed to have solid proof, and so did Bernie.

By September 7, the day I called Bernie, I had found my proof and it broke my heart.

Brazile addressed the proof she discussed in her call to Sanders:

[Gary Gensler, the chief financial officer of Hillary’s campaign] described the [DNC] as fully under the control of Hillary’s campaign, which seemed to confirm the suspicions of the Bernie camp ... Individuals who had maxed out their $2,700 contribution limit to the campaign could write an additional check for $353,400 to the Hillary Victory Fund—that figure represented $10,000 to each of the 32 states’ parties who were part of the Victory Fund agreement—$320,000—and $33,400 to the DNC. The money would be deposited in the states first, and transferred to the DNC shortly after that. Money in the battleground states usually stayed in that state, but all the other states funneled that money directly to the DNC, which quickly transferred the money to Brooklyn.

“Wait,” I said. “That victory fund was supposed to be for whoever was the nominee, and the state party races. You’re telling me that Hillary has been controlling it since before she got the nomination?”

Gary said the campaign had to do it or the party would collapse.

“That was the deal that Robby struck with Debbie,” he explained, referring to campaign manager Robby Mook [and U.S. Rep. Debbie Wasserman Schultz, then the chair of the DNC]. “It was to sustain the DNC. We sent the party nearly $20 million from September until the convention, and more to prepare for the election.”

I gasped ... When we hung up, I was livid. Not at Gary, but at this mess I had inherited ... It would be weeks before I would fully understand the financial shenanigans that were keeping the party on life support.

Brazile referenced controversies surrounding down ballot candidate funding, and turned to a Joint Fundraising Agreement between the Clinton campaign and the party, noting "in exchange for raising money and investing in the DNC, Hillary would control the party’s finances, strategy, and all the money raised."

Among initial reactions to Brazile's commentary were claims Sanders also signed a Joint Fundraising Agreement with the DNC; the existence of that agreement was reported in November 2015. However, Sanders' campaign manager Jeff Weaver clarified that their agreement "didn't give them any jurisdiction over staff," VICE reported. We were unable to locate a copy of the agreement signed by the Sanders campaign in November 2015 to determine if or where significant differences existed between the two. However, on 18 April 2016 the Sanders campaign issued a press release and letter [PDF] openly raising the same questions about potentially improper financial ties between the Clinton campaign and the DNC.

The questionable dealings were detailed in a letter from Brad Deutsch, the attorney for Sanders’ campaign, to U.S. Rep. Debbie Wasserman Schultz, the chair of the DNC. The letter questioned whether the Clinton presidential campaign violated legal limits on donations by improperly subsidizing Clinton’s campaign bid by paying Clinton staffers with funds from the joint DNC-Clinton committee.

“While the use of joint fundraising agreements has existed for some time — it is unprecedented for the DNC to allow a joint committee to be exploited to the benefit of one candidate in the midst of a contested nominating contest,” said Jeff Weaver, Sanders’ campaign manager.

As news of Brazile's remarks spread on social media and in the news, Sen. Elizabeth Warren made a 2 November 2017 appearance on CNN with host Jake Tapper. At approximately the 1:20 mark, Tapper asked if Warren agreed "with the notion that [the 2016 Democratic primary] was rigged."

The DNC shouldn't play favorites. But that's a whole lot different from illegally conspiring with Russia. The FBI knows the difference.

Warren and Brazile's remarks led to widespread debate over the use of the word "rigged," whether either individual "proved" impropriety occurred, and the degree to which the primary might have been affected by the DNC's ties with the Clinton campaign. Not in dispute was the fact both Brazile and Warren unquestionably expressed that they believed that the DNC's behavior during the contest was unfair.

Cilizza, Chris.   "How One Word From Elizabeth Warren Exposed The Massive Split In The Democratic Party."     CNN.   2 November 2017.