Are Hurricane Maria Survivors Getting 'Skittle Meals' From The Government?

Volunteer veterans, journalists, and others claim that FEMA is providing "meals" that are little more than unhealthy snacks to hurricane victims, but a FEMA spokesperson says images circulating online misrepresent what the agency is doing to help Puerto Ricans. 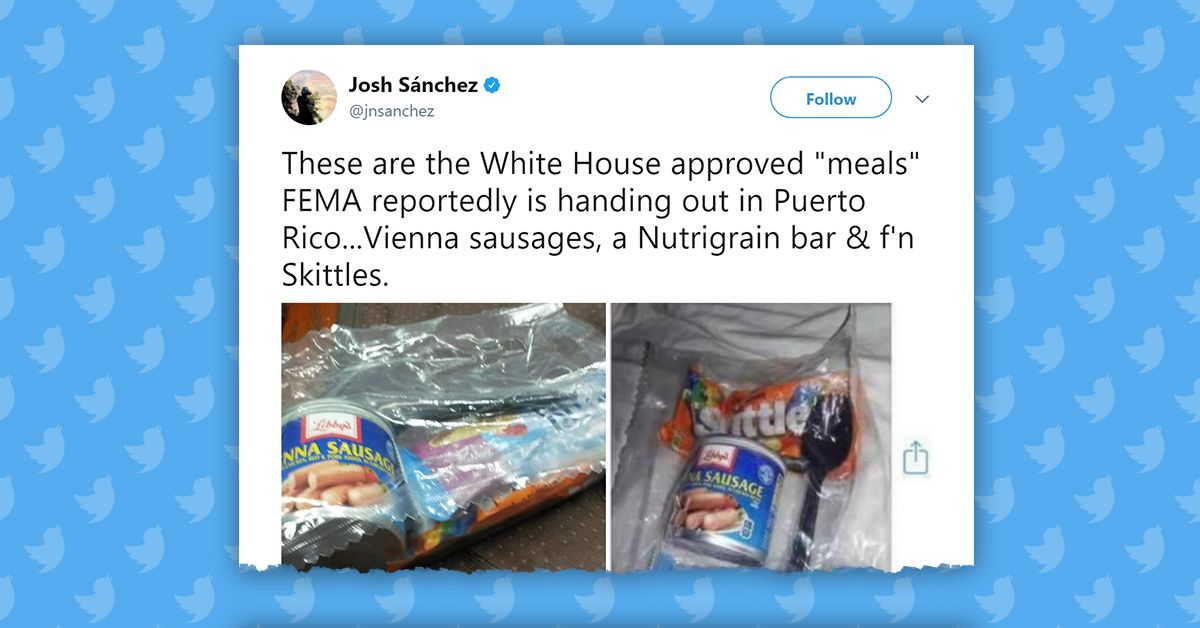 As criticism of the U.S. government's response to the devastation caused by Hurricane Maria in Puerto Rico continued in October 2017, images circulating online focused on the food allegedly being distributed by officials to local survivors.

One picture posted on Facebook on 1 October 2017 shows three plastic bags of items side by side, with a caption reading:

Received this picture from a friend in Dorado Puerto Rico at 3:20 am. This is the humanitarian aide they received from the government limited to 1 "care package" per person. A granola bar, cheese crackers, fruit snacks and a can of Vienna sausage. They waited in line for hours for this? And the President of of USA says he is satisfied with the reliefs efforts. Really? This is real people. No fake news here. God have mercy on this man and his administration. Sad. Please share. Four days later, musician Brenda Hopkins Miranda, who lives in San Juan, posted a photograph comparing what she said was a food packet distributed by local officials to one handed out by the Federal Emergency Management Agency (FEMA), saying: On 8 October 2017, retired U.S. Army Staff Sgt. Jason Maddy made a similar claim in a video on Facebook filmed in Aňasco, where he is part of a group of retired veterans volunteering to provide aid to local residents. He said that people in the area were only receiving "one small meal and six bottles of water per family."

Vienna sausages were also part of what journalist Josh Sánchez described on Twitter on 12 October 2017 as items being distributed in the territory by FEMA. He posted two images:

These are the White House approved "meals" FEMA reportedly is handing out in Puerto Rico...Vienna sausages, a Nutrigrain bar & f'n Skittles. On 13 October 2017, retired U.S. Army Lt. Gen. Russel L. Honoré, who led the Defense Department's relief efforts after Hurricane Katrina hit the Gulf Coast region in 2005, told CBS News that the purported "skittle meals" could have been the result of political maneuvering:

A lot of FEMA employees are my friends. They're good people. And they want to do the right thing. But they get political sideways. Once we go in and look for who contracted for those Skittle meals there will be some prominent senator or congressman [who] made them buy that crap in order to get their budget approved. I'll bet you a fat man and three chunkies there's a congressman or senator [who] influenced them buying Skittles and Vienna sausages.

A FEMA spokesperson, Daniel Stoneking, confirmed the existence of the packs on 16 October 2017, though he said they do not represent the entirety of the meals the agency is providing. He told us:

It is accurate that we have provided snacks. It is common for snacks to be distributed in most disasters where there is food distribution. However, it is not at all true that survivors are ONLY receiving snacks. Survivors are receiving box meals with entrees, Meals-Ready to-Eat, and hot meals, both by contract and through voluntary organizations.

Those who are only reporting about snacks are either disingenous, misinformed, or both. FEMA delivers roughly 200,000 meals a day. This is supplemented by the more than 300,000 additional meals distributed each day by organizations like the Salvation Army, Feeding America, the American Red Cross, World Central Kitchen, Convoy of Hope, World Vision, and Southern Baptist. These groups, along with other voluntary agencies, deliver and distribute across the island, to shelters and to senior centers on a daily basis.

The Departmento de Educacion is providing meals to more than 5,700 occupants in shelters, and distributing food to 224 schools working as community food centers, while also allowing children to do activities on site.

However, at least one unidentified FEMA official has described the agency's efforts as a shortfall:

We are 1.8 million meals short. That is why we need the urgency. And it's not going away. We're doing this much today, but it has to be sustained over several months.

There is no urgency in the government response to this humanitarian crisis. They have all the officials and armed guards at headquarters, but they have no information about the island. They don't even have a map they can share about who needs food. Fema is over-paying and it is under-delivering.

José Andrés has also predicted that his organization would be able to provide "200,000 meals a day no problem" to residents of the territory. However, WCK's contract with FEMA reportedly expired on 10 October 2017. We contacted WCK seeking more information.

As of 14 October 2017, 48 deaths have been attributed to the hurricane by Puerto Rican officials. However, other reports have stated that local morgues were full of unidentified bodies. The Puerto Rican government has also stated that 86 percent of supermarkets in the territory have reopened.