Did a Pieology Pizzeria Employee Write 'F*ck the Cops' on a Police Officer's Receipt?

The Orange County, California-based pizza chain fired a worker for reportedly printing the phrase on a Torrance police officer's receipt. 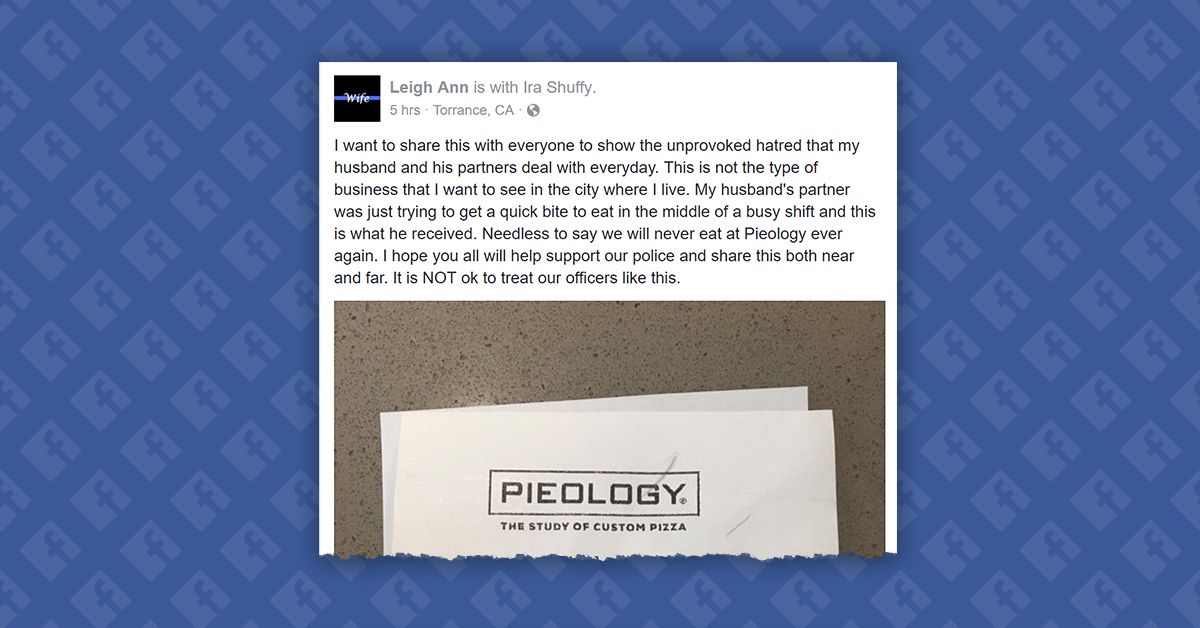 On 18 September 2017, the spouse of a Torrance police officer posted an image to her personal Facebook account showing a receipt from Rancho Santa Margarita-based pizzeria chain Pieology on which an employee had evidently typed in the phrase "Fuck the cops":

The image quickly went viral, and although many viral images are altered, this one is authentic. However, the call to boycott the Southern California restaurant chain is perhaps nullified by the fact Pieology has already fired the offending employee. (The woman who posted the image has since deleted it, but it can still be seen via various Facebook users who posted in this thread.)

Ness Balzano, vice president of human resources for Pieology, told us the company terminated the employee who wrote the message on the officer's receipt as soon as they were made aware of it and were able to verify what had happened. Balzano said the Pieology found out about the 14 September 2017 incident from the viral Facebook post like the rest of the general public, and that an employee typed the words into a variable field on the receipt where they normally would write the customer's name:

Basically an employee we have since terminated typed that in. My understanding is that two officers went in to eat and the employee put it into one receipt and not the other. No one else had any idea what had occurred until it was brought to our attention. We immediately addressed it and took immediate actions.

Torrance police Sgt. Ronald Harris confirmed to us it was a Torrance officer who received the receipt, and added that the department has been in contact with the restaurant:

The officer went to lunch there [Thursday] and he later shared that receipt with some of his peers earlier this morning [18 September 2017]. The wife of another officer found out and posted it to her private social media account. Due to the publicity that received, the department became aware of it. We did send a representative down there and left our info. Our goal was to speak with management to make sure we build that bridge and let them know we have no bad feelings toward their business.

Viral stories about uniformed officers being mistreated occur with regularity; some are hoaxes meant to play on negative emotions or garner publicity or shares. However, this incident did occur, and Balzano attributed it a lack of consideration on the part of the now-fired employee:

I think it was not being aware of the magnitude of their actions and poor judgment mixed in with a little indifference. They were forthcoming and didn't express much. I just hope it can be a lesson. It’s just horrible judgment.

Sgt. Harris said the police department wanted to find out why the employee wrote the message:

From our position as a department we want to know if this person had ever encountered an unfavorable situation with law enforcement in their past to cause these feelings. We’re obviously willing to hear what happened and see if we can be of assistance.