Did John McCain Tell a Constituent to 'Move to Another State' for Better Healthcare?

Shortly after news broke that John McCain had been diagnosed with brain cancer, a story surfaced about his previous stance on health coverage. 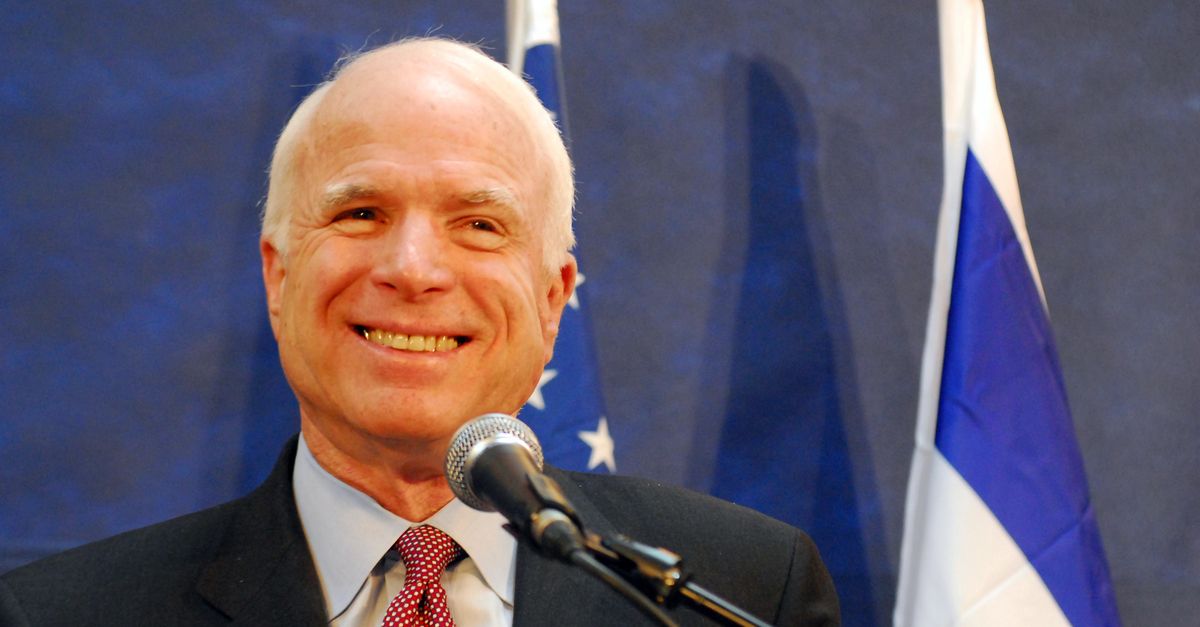 On 19 July 2017, the office of John McCain released a statement informing the public that the senator had been diagnosed with a particularly aggressive form of brain cancer. While many took to social media to wish the politician well, some critics said that while McCain was set to receive world class healthcare, his voting record had prevented many people from receiving the same.

One such tweet (now deleted) came from Los Angeles Times reporter Jessica Roy, who wrote that her friend's husband had asked McCain for help after being diagnosed with the same form of aggressive cancer, glioblastoma. Instead of offering aid, according to Roy's tweet, McCain advised them to move to a different state: This message was later deleted, but not before it racked up thousands of shares on Twitter:

I deleted an earlier tweet because it did not meet my employer's standards for verification and publication. (1/2)

I regret what I wrote and sincerely apologize. (2/2)

However, much of this story is verifiably true. Roy was apparently referring to Sarah "Tashi" Pratt-King, whose struggles to get her husband proper health insurance as he was dying of brain cancer were widely documented and publicized.

Pratt-King posted a message on Facebook on 19 July 2017 about how her husband, Kevin "Wash" Pratt-King, died after losing his health insurance:

When the brain cancer that killed my husband is "trending" because it was diagnosed in the State Senator who specifically backed the State cutting insurance for a "dying man" ....

Time for a social media break for a bit.

Email or Messenger if you need me.

[We wrote to McCain in 2010 to beg him to help Wash keep his AHCCCS insurance. McCain sent us a letter back saying it might be best to move out of Arizona because he did not consider health insurance (and thus, access to healthcare itself) a human right.]

Pratt-King updated her post, saying that while she had a copy of McCain's letter, it was not currently accessible. She also wrote that McCain's response mirrored a message she had previously received from an insurance judge:

Although I have copies of all my correspondence I do not have a copy of this letter I can access at this time, most of my papers from this time period have been boxed and archived.

The Insurance Judge in May 2010 was the first to tell my husband and myself to move, specifically to Canada. We noted that response and the copy of the Insurance Denial when I contacted McCain and then Sen Kyl , he may only have been parroting back what the Judge told us, but his office absolutely supported us moving away from Arizona if we needed health insurance.

I have at least one witness who is still alive who saw his letter and remembers.

As my husband passed away in September 2012, my goal was trying to highlight the cognitive dissonance of the man elected to help us, who refused, who is now benefiting in ways we were denied.

Yes, I took my post down- if/when I can find the letter I'll repost, however, the Hypocrisy of my State Senator should be the focus. Thx.

Without viewing the actual letter, it is impossible to tell McCain's tone (Pratt-King wrote that he "supported" the idea of her moving away from Arizona), whether it was a personal letter from McCain (Pratt-King wrote that "his office" was in favor of the idea), if McCain was merely repeating what Pratt-King had already been told (she wrote that she told McCain about the message she received from an insurance judge), or if the letter even existed as described.

What we do know is that Tashi Pratt-King lost her husband in 2012 after a fight with not only brain cancer, but with health insurance providers. After Wash Pratt-King was diagnosed with glioblastoma, he was enrolled in Arizona Health Care Cost Containment System, or AHCCCS, the state's publicly funded health plan. They soon lost their insurance, however, and spent the next few years fighting for treatment, as detailed in a 2010 article from the Phoenix New Times:

Catastrophe struck at the worst possible time. Since neither had college degrees nor full-time jobs, neither had insurance. And so, through no fault of their own, Kevin's cancer ended up plunging the pair into the hell of poverty and all its attendant government programs.

The programs have been a blessing. At the emergency room in October, Kevin was signed up for the Arizona Health Care Cost Containment System, or AHCCCS, the state's publicly funded health plan. Since the first two surgeries easily ran into the six figures, not counting the hospital stay, that was essential to keeping him alive.

But keeping him enrolled has proved to be something of a full-time job.

In January, AHCCCS administrators sent Kevin and Tashi clumsily worded letters, saying they were both about to be kicked off.

Kevin desperately needed to stay on. He was in the midst of his chemo cycle. Without insurance, his medication alone cost $8,227 — a month. And other than Tashi's hourly wages at her part-time job, the couple's only income came from Kevin's Social Security check.

Yet AHCCCS determined that, in the preceding month, Kevin and Tashi had notched $612.25 in earnings. The monthly limit for AHCCCS users? $608 a month.

The whole thing was galling — not just because $612 a month is nothing, and not just because that $4.25 seemed so arbitrary. At that point, health insurance was literally the only thing keeping Kevin alive.

Pratt-King also documented their struggles on a personal blog. On 2 December 2010, she wrote that she had reached out to McCain and Senator Jon Kyl for help:

It's hard to have to figure out how to explain to him that no one seems to really care. That being a good person is just not enough to matter. That being so young is just not enough to matter. That dying under horrid conditions worrying not only about fighting chemo but fighting to make sure there is food on the table and gas in the car to drive to the hospital just doesn't seem to matter.

To the Governor of our State Jan Brewer he does not matter. She will be responsible for his death and never once think of him as a person. Senator John McCain and Jon Kyl both were solicited to help my husband keep his health insurance when he was in active treatment. Both Senators refused to even return a call or send a form letter. They will not care about his death, or how much he may suffer without medication. John McCain will never have to worry about paying for anti-nausea medication while undergoing chemo. Yet my husband suffered a whole round without any medication to ease the pain of chemotherapy, due directly to Kyl and McCain's voting. Congressman Harry Mitchell told a voter he wanted to meet Wash to "look into" the health insurance issue. Yet he never once made an attempt to do so, even after we contacted his office personally.

These people are legally in charge. Legally they are killing my husband. And he has to live with the knowledge that they do not care at all about him, his life, or his death.

I find it appalling. I find it disgusting. Morally reprehensible. And every one of them has lived decades longer than he will get.

We cannot verify whether or not Senator John McCain informed Tashi and Wash Pratt-King that they should move out of state if they wanted better healthcare. The story about the couple's struggle with cancer after losing their health insurance, however, is true.

Julie Tarallo, McCain's Communication Director, explained how the senator would typically respond to a similar request:

The constituent contacted our office regarding an issue with a state program. Since our office does not have jurisdiction over state programs, our normal course of action in those instances would be to refer the constituent's request to the appropriate state agency and ask that the agency reply directly to the constituent involved. Due to strict privacy laws governing such communications, we are not able to release additional information.