Did a Woman Send a Message Saying That 'Hispanics' Are a 'Nasty Race'?

Paige Doyle reportedly sent the messages to a woman who was inquiring about an item she was giving away. 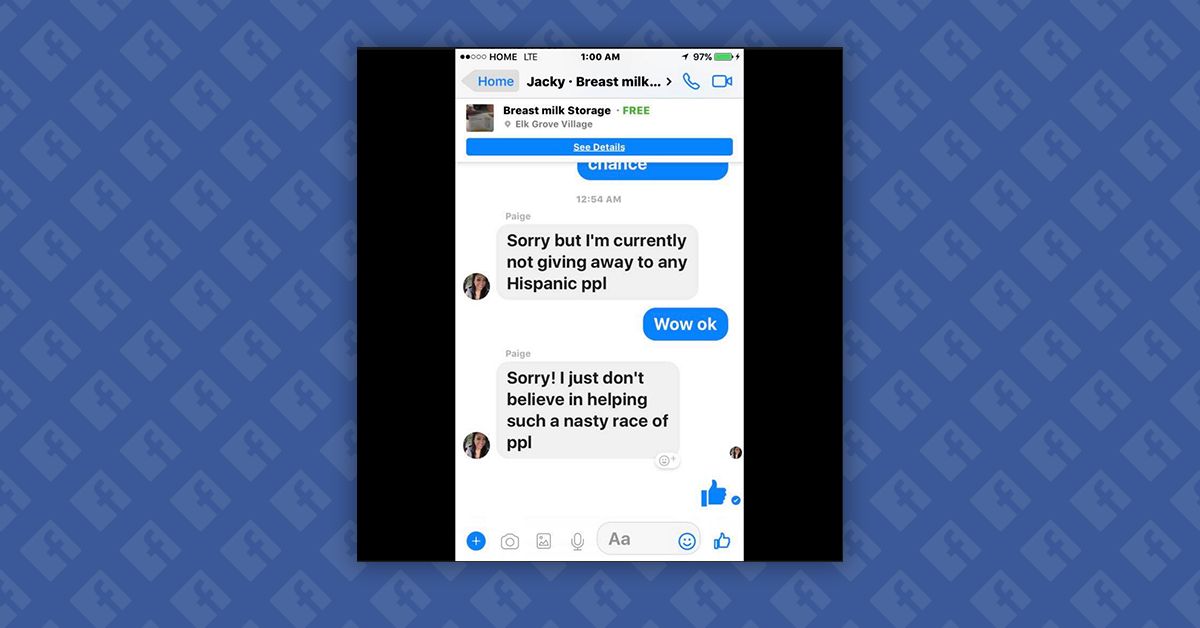 On 18 July 2017, a Facebook user named Jacky Carranza posted images of an exchange she had with a woman named Paige Doyle, who reportedly told Carranza that she wouldn't give her an item that she needed, as she did not believe in helping "Hispanics".

Carranza had apparently asked Doyle about a breast milk storage device that Doyle was giving away, and instead of answering her questions, Doyle responded: "Sorry but I'm currently not giving away to any Hispanic [people]". "Sorry! I just don't believe in helping such a nasty race of [people]". "You have a lot of nerve asking me for free item. You [people] get everything for free! In fact I'm surprised you can even read this lol".

The images of the exchange promptly went viral, and as a result social media users lashed out at anyone bearing the name "Paige Doyle", and at the woman's former place of employment.

Doyle's profile said she worked for the Advocate hospital system near Chicago — Good Samaritan and Good Shepherd. We reached out to Advocate (which operates eleven health care facilities in Illinois), and were told by a representative that Doyle did work there as a patient care technician, but resigned before the July 2017 Internet controversy began. Hospital officials became aware of the offensive comments when social media users flooded their accounts with complaints.

We were disappointed and troubled by the comments circulating on social media.  As consistent with our mission, values and philosophy — we firmly believe that all people deserve our dignity and respect. We fully support an environment of equality throughout our organization.

The hospital further noted that it was was not involved in whatever giveaway Doyle was doing when she sent the racist messages and as of 20 July 2017 — more than two weeks after Doyle resigned — continues to receive angry messages demanding that she be fired.

We have reached out to Carranza for comment, but have not received a response. We were unable to locate contact information for Doyle.