How Impeachment Works, and Why Donald Trump is Safe (For Now)

No sitting U.S. president has ever been impeached, convicted, and removed from office. Could Donald Trump be the first? 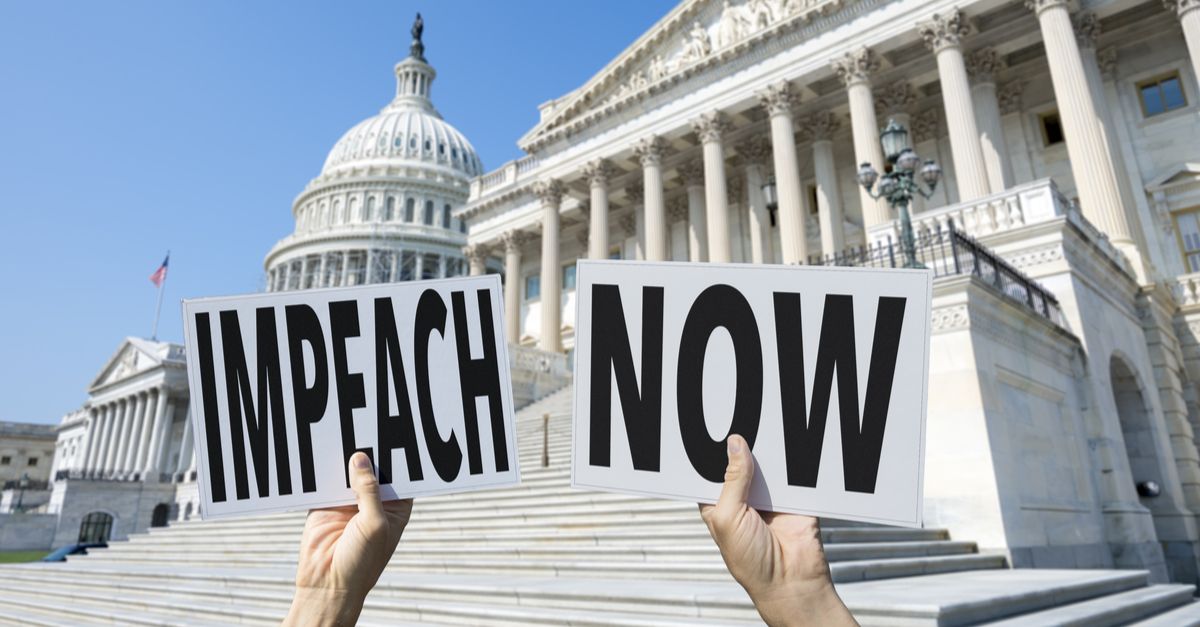 On 12 July 2017, Congressman Brad Sherman introduced an article of impeachment against President Donald Trump, the first such instance since Trump took office in January 2017.

Impeachment is the process by which Congress adjudicates charges against a federal official (which can include judges, cabinet secretaries and even the President or Vice-President) in order to convict them and remove them from office.

Sherman's motion has one official co-sponsor — Representative Al Green from the 9th District of Texas, who in May called for the President's impeachment from the floor of the House of Representatives.

However, opponents of the President shouldn't get too excited for the moment (nor should his supporters worry). There is a long and difficult path ahead if Sherman's motion is to culminate in the departure of Donald Trump from the presidency.

The President, Vice President and all civil Officers of the United States, shall be removed from Office on Impeachment for, and Conviction of, Treason, Bribery, or other high Crimes and Misdemeanors.

Impeachment proceedings typically begin in the House of Representatives, although there are technically several ways in which they can be initiated. Typically, a representative triggers the proceedings by either introducing articles of impeachment, which outline the case against the president, or initiating an inquiry into whether impeachment is warranted. In either case, a committee (usually the House Judiciary Committee) decides by a simple majority vote whether to bring the articles of impeachment to the full House.

Once the House votes on whether or not to impeach, the case goes before the Senate. The impeachment hearing is analogous to a criminal trial, with the Chief Justice of the Supreme Court presiding in the Senate chamber, and "managers" from the House of Representatives acting as prosecutors.

If the Senate votes to convict (by a majority of two thirds or more) on any of the articles of impeachment, the president is removed from office.

Brad Sherman's H.R. 438 is the ninth such motion since Richard Nixon resigned in 1974. In all, House members have filed articles of impeachment against five of the last eight presidents, with only Ford, Carter and Obama being spared. In only one of those cases -- Bill Clinton's -- did two articles of impeachment make it past the House.

In fact, in 228 years, the House of Representatives has only voted to impeach a sitting President on two occasions. In 1868, President Andrew Johnson was impeached, but acquitted by the Senate. 131 years later the Senate also acquitted Bill Clinton.

In 1974, the House Judiciary Committee approved articles of impeachment against Richard Nixon, but he resigned from office before the House voted as a whole. It is widely believed that a significant majority in the House would have voted to impeach Nixon, and that the Senate would have convicted him.

Judiciary committee: If Sherman's motion is to go before the House, it will need the support of a majority of members on the House Judiciary Committee which at the moment is composed of 24 Republicans and 17 Democrats. So Sherman and Green would have to convince four Republicans to support the measure, assuming every Democrat votes for it.

This would be difficult, although it's not unprecedented. In 1974, faced with increasingly damning evidence of obstruction of justice, six out of 17 Republicans sitting on the committee supported the impeachment of Republican President Richard Nixon. The Democrats already had a majority on the committee at that time, so they didn't need those Republican votes. But with them came a resounding majority of 27 to 11.

In 1998, the committee voted almost entirely along party lines, with all 21 Republicans voting in favor of one article of impeachment against Democratic President Bill Clinton, and all 16 Democrats voting against. A second article was passed by 20-17, with Republican Lindsey Graham crossing party lines and voting against it.

House of Representatives: As of 17 July 2017, there are 240 Republicans and 194 Democrats in the House, with one seat vacant after the resignation of Republican Jason Chaffetz of Utah. If a Republican replaces him, the House will be split 241-194. That means that, assuming every Democrat votes for it, Trump's impeachment would require 24 Republican members to cross party lines -- more than have ever done so in a House impeachment vote.

However, the strength of the articles of impeachment plays a role here. In the run-up to impeachment proceedings in 1974, the evidence of obstruction of justice by Nixon became increasingly clear-cut. Had Nixon not resigned before the House vote, it's eminently possible that a significant number of Republican representatives would have crossed party lines to vote for impeachment, especially given that six out of 17 of them did so on the Judiciary Committee.

If House Democrats can find and present damning, irrefutable evidence of "high crimes and misdemeanors" by Trump, and if public opinion reaches a critical mass of opposition to the President, finding 24 Republicans to switch sides and vote for his impeachment might not be as improbable as it looks on paper.

The Senate: The final and most difficult step lies with the Senate, which requires a two-thirds majority to remove a president from office. On five occasions, Senators have voted on articles of impeachment against a president (three articles against Johnson, two against Clinton) and on every occasion they have failed to reach the two-thirds majority required.

In the case of Johnson, though, it was as close as could be. The Senate contained 42 voting Republicans and 12 voting Democrats. In the impeachment trial, Johnson was saved by the votes of seven Republicans who crossed party lines to vote against impeachment. The final vote was 35-19 in favor of conviction, just one short of of the 36 required to impeach.

That 35-19 split held in votes on three articles of impeachment, after which the process collapsed, even though the House had endorsed 11 articles in total.

In 1998, Republicans pursuing the impeachment of Bill Clinton didn't even get close to a two-thirds majority, despite a holding a 55-45 Senate majority.

On the first article, which alleged perjury, all 45 Democrats were joined by 10 Republicans, leading to a 55-45 acquittal, 21 votes short of the two thirds needed to convict. On the third article, which alleged obstruction of justice, the Senate was split 50-50, with five Republicans joining all 45 Democrats. Clinton was again resoundingly acquitted.

In July 2017, the Senate is split as follows: 52 Republicans, 46 Democrats, and 2 Independents -- Senators Bernie Sanders of Vermont and Angus King of Maine, who both caucus with the Democrats.

In order to garner a two-thirds majority for conviction, Senate Democrats would have to persuade 18 Republican Senators to cross party lines, assuming all 48 members of the Democrat bloc voted to convict.

So even if a motion like Brad Sherman's does the improbable and surpasses every hurdle along the way, more than a third of the Republican contingent in the Senate would have to vote against their own party's president in order for Donald Trump to be successfully impeached, convicted, and removed from office.

That's improbable, but if it were to happen, it would require damning, unambiguous evidence of serious wrongdoing by the President, rising to the Constitutional standard of "high crimes and misdemeanors," accompanied by massive public support for his removal from office.

However, these political hurdles could significantly diminish by January 2019. All 435 House seats and 33 Senate seats are up for grabs in mid-term elections on 6 November 2018. A significant realignment of political divisions in Congress, combined with a potentially consequential investigation by Special Counsel Robert Mueller, might just clear a path for the first ever fully-realized impeachment of a sitting United States President.

House of Representatives Committee on the Judiciary.  "Impeachment of William Jefferson Clinton, President of the United States - Report."   Congress.gov.  16 December 1998.