CNN Clashes With Lawmaker Over Report on Jeff Sessions

Rep. Jeff Duncan has called on the network to retract its story about Sessions' meetings with a Russian ambassador. 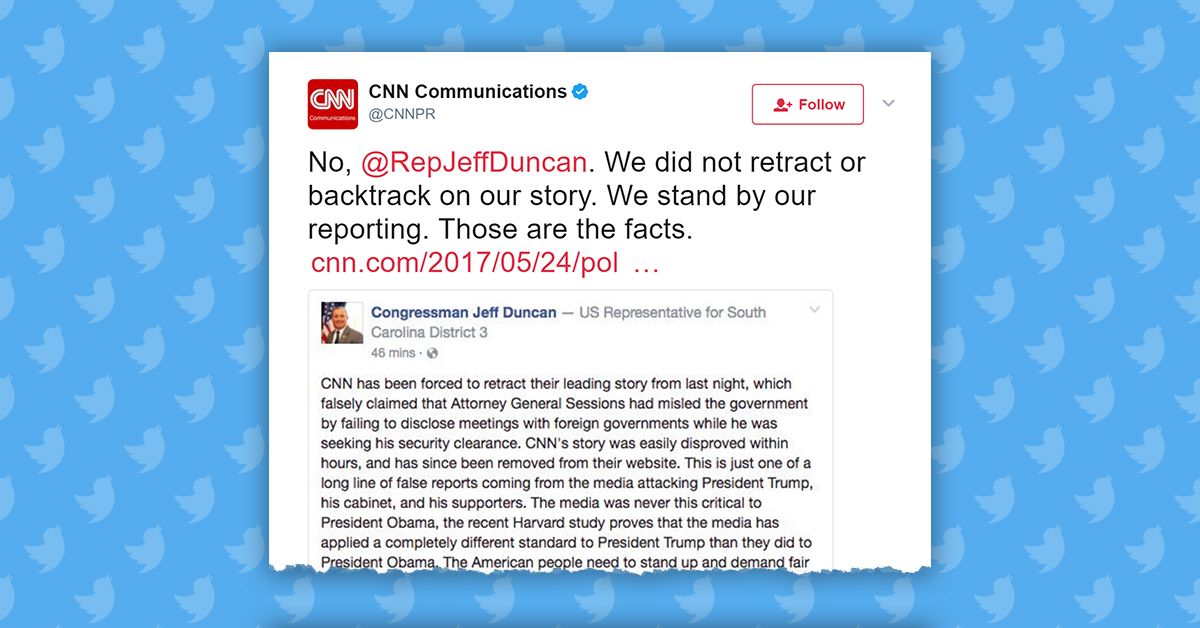 On 25 May 2017, CNN hit back at a lawmaker from South Carolina after he criticized its reporting on meetings between Attorney General Jeff Sessions and Russian Ambassador Sergey Kislyak.

Early in the day, Rep. Jeff Duncan (R) posted on his Facebook page that the network had "been forced to retract" the story, which was published the previous day. He initially wrote, in part:

No, @RepJeffDuncan. We did not retract or backtrack on our story. We stand by our reporting. Those are the facts. A source close to Duncan's office told us that the Congressman thought the report by Evan Perez and Manu Raju had been taken down, because it was off the front page of CNN's web site and could not be found through the site's internal search engine.

The source also alluded to a tweet by CNN host John Berman; according to them, Berman said that "Democrats were saying that the procedure that CNN described was inaccurate."

JUST NOW: Democrat @JackieSpeier tells us that if Jeff Sessions was meeting with Russians in capacity as a Senator...no need to disclose.

We reached out to both Berman and CNN's press office seeking comment. The source also said that Duncan's office had contacted the network and given it information detailing why they felt the story was "false."

The source also told us:

According to the report, Sessions failed to account for two meetings in 2016 with Kislyak while applying for his security clearance. The process reportedly required him to list "any contact" dating back to 2009 between he or his family and a "foreign government" or any of its "representatives." Sessions met with Kislyak during the Republican National Convention in July 2016 — by which point he was also the national security advisory committee chair for President Donald Trump's campaign as well as a member of the Armed Services Committee — and again that September.

In January 2017, Sessions testified before the Senate Judiciary Committee that he was "not aware" of any interactions between members of Trump's campaign and Russian government officials. He did not mention his meetings with Kislyak, but said:

I have been called a surrogate at a time or two in that campaign and I did not have communications with the Russians.

Sessions initially listed a year's worth of meetings with foreign officials on the security clearance form, according to Justice Department spokeswoman Sarah Isgur Flores. But she says he and his staff were then told by an FBI employee who assisted in filling out the form, known as the SF-86, that he didn't need to list dozens of meetings with foreign ambassadors that happened in his capacity as a senator.

After CNN's story published, a spokesman responded to the reporting with a statement, saying that Sessions was instructed not to list meetings like the ones with Kislyak on his form.

"As a United States Senator, the Attorney General met hundreds — if not thousands — of foreign dignitaries and their staff," spokesman Ian Prior said. "In filling out the SF-86 form, the Attorney General's staff consulted with those familiar with the process, as well as the FBI investigator handling the background check, and was instructed not to list meetings with foreign dignitaries and their staff connected with his Senate activities."

The source told us that it is standard operating procedure for people applying for security clearances to be told not to disclose meetings with foreign officials "in their official capacity."

Duncan has since called on the network to air an apology and retraction for the story "at the top of every hour today."