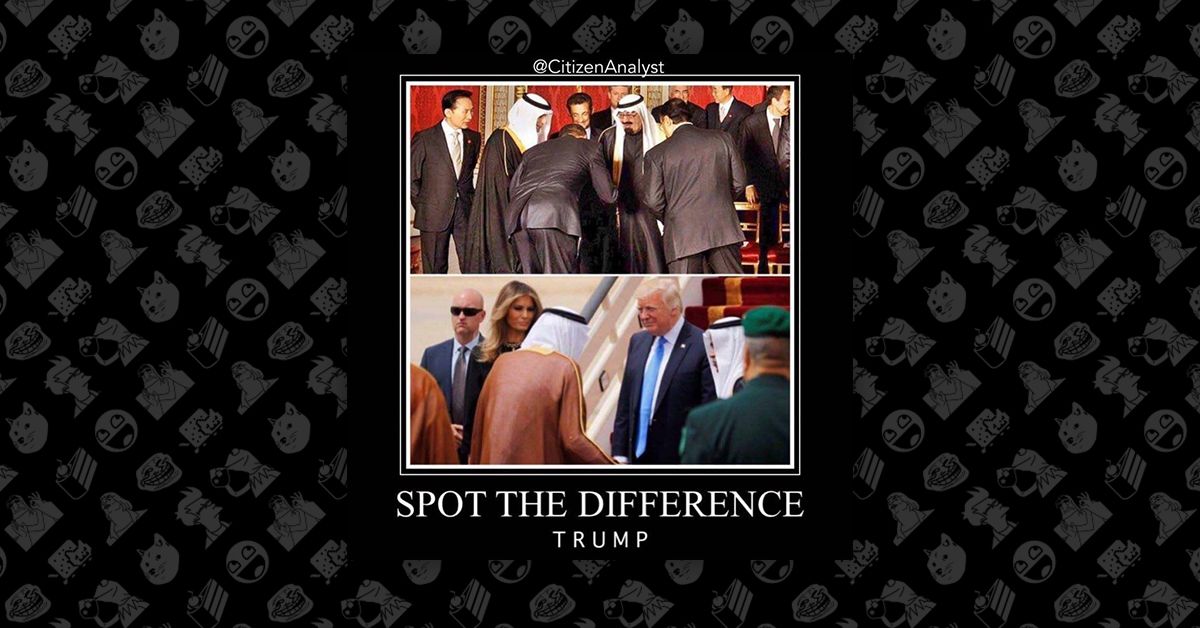 In May 2017, memes and macros comparing photographs of President Barack Obama's and President Donald Trump's respective trips to Saudi Arabia appeared after President Trump's visit to the country.

Images appeared to show Obama bowing at the waist to a Saudi leader, and Trump standing straight in a similar situation: The meme was widely shared in some circles, along with comments and suggestions about how a president of the U.S. should behave while on diplomatic missions. The hyperpartisan web site The American Mirror, for instance, declared that America was "Great Again" because Trump, unlike Obama, refused to bow to the Saudi King.

These two photographs are both real, but lack context. The photograph of Obama was taken in 2009 at the G20 summit, and shows the former U.S. president appearing to bow to Saudi King Abdullah bin Abdulaziz al Saud. At the time, some outlets criticized Obama for the gesture, calling it a "shocking display of fealty":

"It wasn't a bow. He grasped his hand with two hands, and he's taller than King Abdullah."

President Obama's purported bow became a continuous talking point throughout his presidency, with his detractors portraying the gesture as a sign of weakness. In 2012, Trump used it to question Obama's diplomatic skills:

.@BarackObama bowed to the Saudi King in public--yet the Dems are questioning @MittRomney's diplomatic skills.

Although many painted Obama's bowing as a sign of weakness or deference, he was not the first sitting president to bow (or to be criticized for bowing) to a foreign leader. President Nixon bowed to Japan Emperor Hirohito in 1971 and referred to him and his wife as 'Your Imperial Majesties.'" Bill Clinton was criticized for bowing in 1994 to Japan's Emperor Akihito. George W. Bush was mocked for holding hands with Saudi Crown Prince Abdullah in 2005. Even President Eisenhower bowed to France's leader Charles de Gaulle. Although these gestures may be viewed as weak by some, bowing can also be a sign of respect:

In an online State Department posting from 2007 titled "Protocol for the Modern Diplomat," envoys are advised to be aware of greeting rituals such as kisses, handshakes or bows and to follow a country's tradition.

"Failure to abide with tradition may be interpreted as rudeness or a lack of respect for colleagues," advises the posting, which make no mention of whether the rules should apply to a President as well.

The photograph of Trump is also genuine. That image was taken on 20 May 2017 after the President touched down in Riyadh and King Salman Abdullah bin Abdulaziz greeted him. A video of the meeting shows that Trump did not bow:


It wasn't long before a countermeme appeared, purportedly showing how President Trump bowed while receiving an honor from the King of Saudi Arabia, while Obama had not:

Funny, unlike Trump, Obama didn't bow to the King of Saudi Arabia when receiving the Order of King Abdulaziz.

This meme is also misleading. It shows President Obama removing the medal from his shoulders. In reality, Obama, like Trump, bowed his head as the honor was bestowed:


And a video of Trump as he received Saudi Arabia's top civilian honor:

Tapper, Jake.   "On President Obama's Bow to the Japanese Emperor, An Academic Friend Writes That Both the Left and the Right Are Wrong."     ABC News.   15 November 2009.