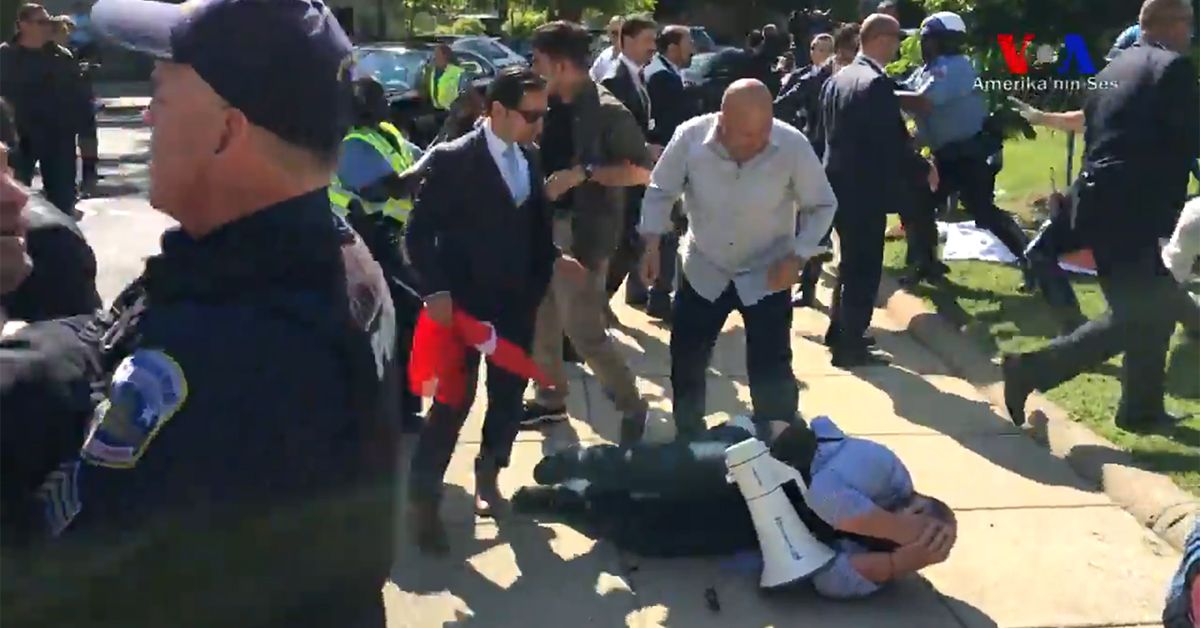 Authorities in Washington, D.C. are investigating what they called "a brutal attack on peaceful protesters" outside the home of Turkey ambassador Serdar Kilic's home on 16 May 2017.

Metropolitan Police Chief Peter Newsham did not confirm that description during a press conference the following day, saying that his department was "in the preliminary stages" of its investigation. He said 11 people and one of his officers were injured during the incident, which was partially captured on video by media outlets.

However, the U.S. State Department did confirm the involvement of Erdogan's detail in its own statement:

We are concerned by the violent incidents involving protestors and Turkish security personnel Tuesday evening. Violence is never an appropriate response to free speech, and we support the rights of people everywhere to free expression and peaceful protest.

We are communicating our concern to the Turkish government in the strongest possible terms.

The footage shows local police shoving not only demonstrators but several men in suits. One of the men in suits can be seen kicking a woman who had already been knocked to the ground. Witnesses reportedly said that the protesters were demanding that a pro-Kurdish lawmaker, Selahattin Demirtas, be released from prison in Turkey. Another video, posted on 18 May 2017, shows Erdogan watching the incident from afar for a brief period.

Newsham said of the violence:

That's not something that we will tolerate here in Washington D.C. This is a city where people should be allowed to come and peacefully protest. Police involvement in that case was pretty dicey, because there were some people out there who had firearms. [Officers] had to safely restore order, and thankfully that was done without more significant injuries.

We contacted the Turkish embassy seeking comment, but have yet to get a response.

Newsham did not comment on reports stating that the U.S. Secret Service arrested, then released, members of Erdogan's security detail. The service has not responded to our request for comment.

The latest incident appears to be part of a pattern. Erdogan's visit to Washington D.C. in March 2016 was also marred by fights between his supporters and protesters, and members of his security detail were caught on video trying to eject journalists critical of his administration prior to a planned speech at the Brookings Institution. National Press Club president Thomas Burr said at the time:

Turkey's leader and his security team are guests in the United States. They have no right to lay their hands on reporters or protesters or anyone else for that matter, when the people they are apparently roughing up seemed to be merely doing their jobs or exercising the rights they have in this country.

Ecuadorian Foreign Minister Ricardo Patino called Erdogan's security detail "irresponsible" following another violent incident a month later in Ecuador's capital city of Quito. Erdogan was visiting the city to finalize a trade agreement between the two countries when the detail attacked lawmaker Diego Vintimilla, who was reportedly protecting a female demonstrator. Vintimilla's nose was broken as a result.

On 29 August 2017, a grand jury indicted 19 people, including 15 Turkish security officials, and charged with "conspiracy to commit a crime of violence, with a bias crime enhancement," which is punishable by up to 15 years in prison.

Only two of the people indicted is reportedly in custody, and they are scheduled to appear in court on 7 September 2017.

The Guardian. "'Erdoğan's bodyguards' in Violent Clash with Protesters in Washington DC." Accessed via theguardian.com. 15 May 2017.

Voice of America. "Erdogan Supporters in Violent Clash with Protesters in Washington." Accessed via voanews.com. 17 May 2017.