The crowd gathered to protest the planned removal of a statue of Confederate general Robert E. Lee. 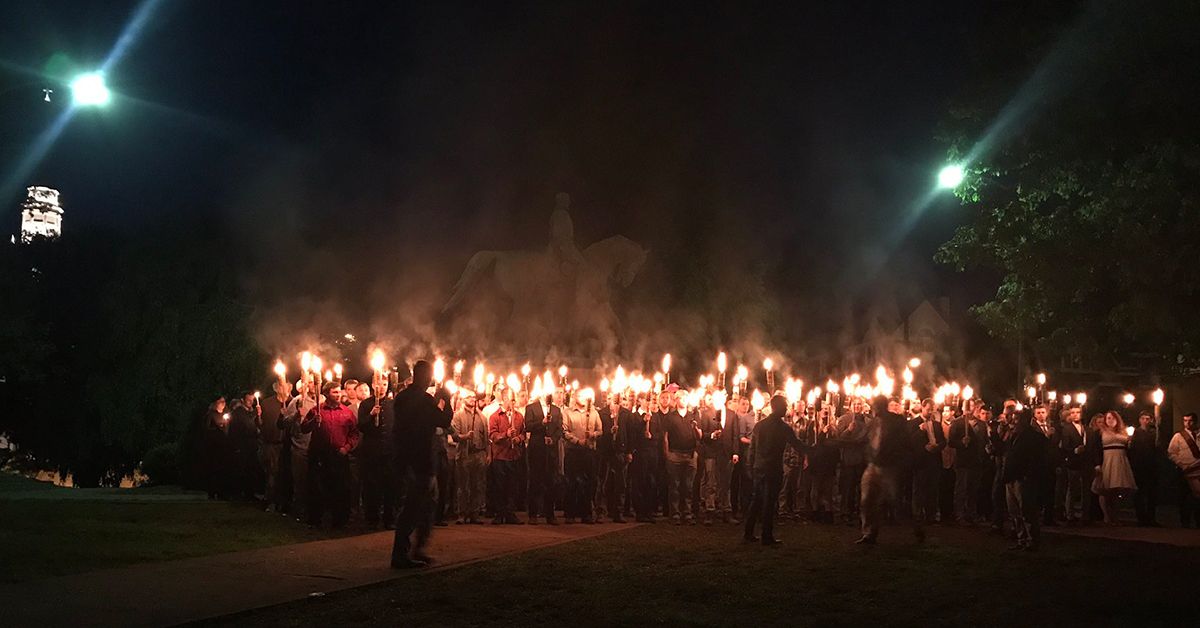 Protesters held a torchlit demonstration in Charlottesville, Virginia on 13 May 2017, in opposition to the planned removal of a statue of Confederate general Robert E. Lee from a local municipal park.

Video taken at the protest shows demonstrators chanting “You will not replace us”, “Russia is our friend” and “No more brother war”, a white supremacist slogan that invokes unity among those of white European descent.

The crowd carried tiki torches, a move that Charlottesville Mayor Mike Signer said was reminiscent of the Ku Klux Klan. Klan members have been known to carry torches to their meetings and used them to light crosses on fire as an intimidation tactic:

White nationalist Richard Spencer, who popularized the term "alt-right", appears to have attended the rally. Earlier in the day, he addressed a similar demonstration centered around the statue of Confederate General Stonewall Jackson in nearby Jackson Park.

Charlottesville City Council voted in April to rename Lee Park and remove the statue of Lee from it, a decision that provoked controversy in Virginia. Republican candidate Corey Stewart has made his opposition to the removal part of his gubernatorial campaign.

In response to Saturday night’s rally, demonstrators gathered for a candlelight vigil in Lee Park on Sunday evening. Protesters draped a banner over the Lee statute that read “Black Lives Matter — Fuck White Supremacy.” According to Charlottesville newspaper the Daily Progress, the vigil involved members of the racial justice organizations Black Lives Matter and Showing Up For Racial Justice Charlottesville, among others.

Daily Progress also reported that some attendees of the rallies in support of the Confederate statues were present at Sunday’s vigil, and scuffles ensued between the two sets of demonstrators.

During the last minutes of the rally, several disorders ensued and while breaking these up one of our officers was struck with an object thrown from the crowd causing a minor injury to his head.

They told us that the crowd for Saturday night’s demonstration totaled between 100 and 150 people.