President Trump: Andrew Jackson Could Have Prevented the Civil War

Does Trump's suggestion that Andrew Jackson could have stopped the Civil War have any basis in history? 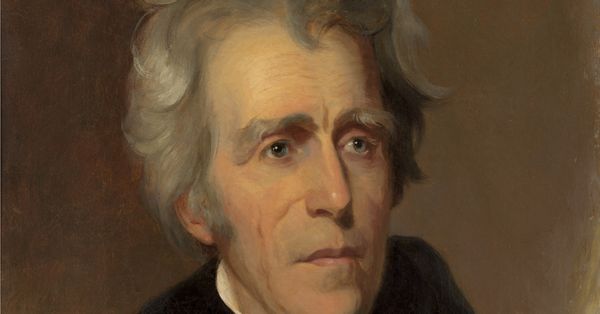 On 1 May 2017, Sirius XM Radio teased an interview in which President Donald Trump praised Andrew Jackson and then wondered aloud if the Civil War "could not have been worked out" if Jackson's presidency had come later. Trump, who spoke with Washington Examiner reporter Salena Zito, also compared his own campaign to Jackson's:

"Had Andrew Jackson been a little bit later, you wouldn’t have had the Civil War" @realDonaldTrump told @SalenaZito. Full intv at 2pE, Ch124 pic.twitter.com/d7PuRRm7Md

Here is a transcript of the relevant passage:

I mean had Andrew Jackson been a little later you wouldn’t have had the Civil War. He was a very tough person but he had a big heart. He was really angry that he saw what was happening with regard to the Civil War, he said “There’s no reason for this.” People don’t realize, you know, the Civil War, if you think about it, why? People don’t ask that question, but why was there the Civil War? Why could that one not have been worked out?

The subject came up because Trump had recently visited the Hermitage, Andrew Jackson's 1,000-acre cotton plantation near Nashville, Tennessee, where at the time of Jackson's death in 1845, the roughly 150 slaves he owned still lived and worked. Trump has expressed an affinity for the seventh U.S. president, to whom he referred during his visit to Tennessee as the "people's president" (a designation he also applies to himself). Trump was the first sitting president since Ronald Reagan to tour the plantation.

It's obscure, at first glance, why Trump would assert that Jackson, a slaveholder who died 16 years before the start of the Civil War, could have prevented that conflict from occurring. The question "Why could [the Civil War] not have been worked out?" implies that there could have been a satisfactory compromise between North and South. But given that the primary point of contention was the expansion of slavery — of which the South was fervently in favor (to the point of threatening secession) and the North was fervently not — it's hard to envision what possible grounds for compromise there could have been.

It's equally difficult to envision how Andrew Jackson, a southern slave owner, could have supported, much less brokered, such a compromise between North and South.

Trump's question makes a little more sense if one assumes he is referring to Jackson's stolid support of the Union during an earlier incident in which South Carolina threatened to secede over the imposition of federal tariffs in 1832, when Jackson was president.

A small majority of the citizens of one State in the Union have elected delegates to a State convention; that convention has ordained that all the revenue laws of the United States must be repealed, or that they are no longer a member of the Union. The governor of that State has recommended to the legislature the raising of an army to carry the secession into effect, and that he may be empowered to give clearances to vessels in the name of the State. No act of violent opposition to the laws has yet been committed, but such a state of things is hourly apprehended, and it is the intent of this instrument to PROCLAIM, not only that the duty imposed on me by the Constitution, “to take care that the laws be faithfully executed,” shall be performed to the extent of the powers already vested in me by law or of such others as the wisdom of Congress shall devise and Entrust to me for that purpose; but to warn the citizens of South Carolina, who have been deluded into an opposition to the laws, of the danger they will incur by obedience to the illegal and disorganizing ordinance of the convention — to exhort those who have refused to support it to persevere in their determination to uphold the Constitution and laws of their country, and to point out to all the perilous situation into which the good people of that State have been led, and that the course they are urged to pursue is one of ruin and disgrace to the very State whose rights they affect to support.

It was a crisis that could have precipitated a civil war but did not, largely because in addition to threatening military action, Jackson orchestrated a compromise requiring Congress to lower the tariffs and South Carolina to drop its ordinance.

Jackson can be credited, in other words, with averting civil war (if only temporarily) in 1832.

As much as that may help explain President Trump's point, however, it doesn't render his claim that Andrew Jackson could have prevented the Civil War any less incoherent. It's one thing to broker a compromise between an individual state and the federal government on tariffs, but quite another to find a "middle ground" between freedom and slavery. Moreover, we have little reason to suppose that Jackson, whose cotton plantation lay in the heart of what was to become the Confederacy, would have taken the Union's side.