Are We Living Inside a Computer Simulation?

A philosophical notion called the "simulation hypothesis," said to be growing in popularity in high-tech circles, holds that our reality may just be a sophisticated computer mockup. 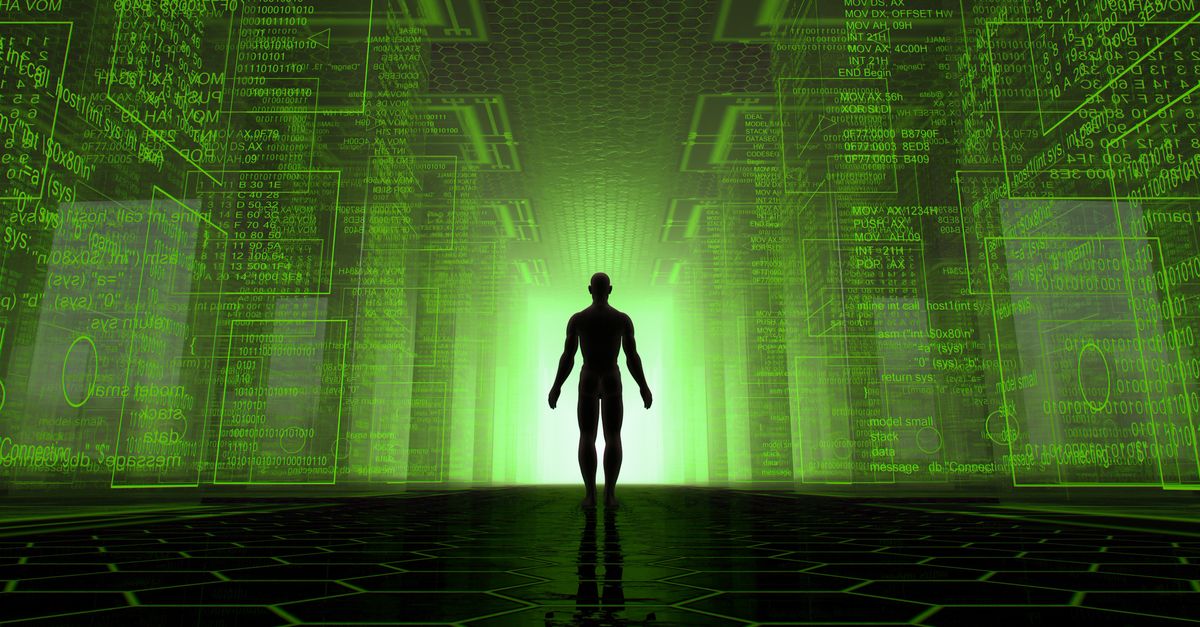 What if we told you that life as we know it is a computer simulation designed by a vastly superior intelligence, meaning that everything we think of as "real," including ourselves, is only a software-generated illusion — that we are, in effect, living inside a video game and just don't know it?

We're guessing you'd scoff, and we wouldn't blame you.

But what if Elon Musk told you the same thing? Musk, as you probably know, is the brilliant billionaire entrepreneur behind the SpaceX rocket program, Tesla electric automobiles, and other cutting-edge tech ventures. He's considered a genius in many quarters. Here is what he said about computer simulations overtaking reality during a public appearance in 2016:

I think here's the strongest argument for us probably being in a simulation, I think is the following: that 40, call it 40 years ago, we had Pong. Two rectangles and a dot. That was what games were. Now, 40 years later, we have photo-realistic 3D simulations with millions of people playing simultaneously, and it's getting better every year. And soon we'll have virtual reality, have augmented reality.

If you assume any rate of improvement at all then the games will become indistinguishable from reality. They'll be indistinguishable. Even if that rate of advancement drops by a thousand from what it is right now. Then you just say, okay, let's imagine it's 10,000 years in the future, which is nothing in the evolutionary scale. So given that we're clearly on a trajectory to have games that are indistinguishable from reality and those games could be played on any set-top box or on a PC or whatever, and there would probably be, you know, billions of such computers or set-top boxes it would seem to follow that the odds that we're in base reality is one in billions.

We ought to point out that Musk isn't the only one talking this way (though he is surely among the most pessimistic). A 2016 article in the New Yorker reported that the notion is becoming increasingly popular in tech entrepreneur circles:

Many people in Silicon Valley have become obsessed with the simulation hypothesis, the argument that what we experience as reality is in fact fabricated in a computer; two tech billionaires have gone so far as to secretly engage scientists to work on breaking us out of the simulation.

(The article doesn't state which altruistic tech billionaires are trying to rescue us from the Matrix, by the way.)

Even some scientists — astronomer Neil deGrasse Tyson, for one — think it's possible, even likely, that we're a figment of someone else's virtual reality program.

Would be cool if be our lives, our planet, our solar system, our universe, were part of a data simulation conducted by aliens

Like Musk's, Tyson's version of the argument rests on the assumption that any sufficiently advanced civilization (i.e., one way more advanced than our own) would inevitably invent such a technology:

Mammals have very close DNA to us. They cannot do trigonometry. Some people can’t do trigonometry. Certainly not these animals. So, if they cannot do trigonometry, and they have such close genetic identity to us, let’s take that same gap and put it beyond us and find some life form that is that much beyond us that we are beyond the dog or the chimp. What would we look like to them? We would be drooling, blithering idiots in their presence. ... And if that’s the case, it is easy for me to imagine that everything in our lives is just the creation of some other entity for their entertainment. It is easy for me to think that. So, whatever the likelihood is: zero percent, 1 percent, 17, 42, no answer, I’m saying the day we learn that it is true I will be the only one in the room saying I’m not surprised.

In 2016, Bank of America (of all institutions) jumped on the Matrix bandwagon by issuing an investment brochure suggesting that we may already live in a simulated reality:

BANK OF AMERICA: There's a 20%-50% chance we're inside the matrix and reality is just a simulation Myles Udland pic.twitter.com/TltpYbjPxI

To clarify, Bank of America wasn't trying to convince anyone that we are, in fact, living inside a computer simulation. They were exploiting the concept to pique investors' interest in virtual reality, and properly credited the underlying argument to its originator, Oxford University philosopher Nick Bostrom.

Bostrom's 2003 paper, "Are You Living in a Computer Simulation?," lays it out as follows:

Many works of science fiction as well as some forecasts by serious technologists and futurologists predict that enormous amounts of computing power will be available in the future. Let us suppose for a moment that these predictions are correct. One thing that later generations might do with their super-powerful computers is run detailed simulations of their forebears or of people like their forebears. Because their computers would be so powerful, they could run a great many such simulations. Suppose that these simulated people are conscious (as they would be if the simulations were sufficiently fine-grained and if a certain quite widely accepted position in the philosophy of mind is correct). Then it could be the case that the vast majority of minds like ours do not belong to the original race but rather to people simulated by the advanced descendants of an original race. It is then possible to argue that, if this were the case, we would be rational to think that we are likely among the simulated minds rather than among the original biological ones. Therefore, if we don’t think that we are currently living in a computer simulation, we are not entitled to believe that we will have descendants who will run lots of such simulations of their forebears.

If we understand him correctly, Bostrom is saying that if we accept the possibility that a more advanced race could create a simulated reality indistinguishable from the real thing (specifically, a simulation recreating the lives of their own forebears) then, logically, we must also accept that it's possible — in fact, more probable than not — that we're already inside such a simulation.

If you're not okay with that, take solace in the fact that other philosophers, including some with specific expertise in AI and virtual reality, have voiced strong disagreement with Bostrom and Musk's "simulation hypothesis."

Among the very good reasons to be skeptical, according to Riccardo Manzotti, a professor of philosophy at IULM University in Milan (who also happens to hold a PhD in robotics), is that the hypothesis assumes it's even possible to achieve a virtual reality indistinguishable from reality itself. "It's really quite astonishing how many people are bamboozled by the notion of an immaterial simulated reality," Manzotti told us:

What's he saying? Well, if you recall Musk's argument, he entreats us to assume an inevitable technological progression from "Pong" to the 3D virtual reality games that exist today to the ability to create a full-on, Matrix-like simulated reality. "If you assume any rate of improvement at all," Musk said, "then the games will become indistinguishable from reality."

Not so, Manzotti argues. That argument is based on an unrealistic, idealized notion of what a simulation is, or can be. "All real cases of simulation are built using actual physical properties," he says:

Human subjects see actual images projected onto their retinas. They don't see an immaterial world, a pure simulation. For instance, there is no such thing as a 'pure' simulated color. There is a color on a screen and one mistakes it for the color of, say, a spaceship or a Doom monster, while it is still just the color of the screen in front of one's eyes—  a physical color. Real simulations [i.e., those we experience in virtual reality games] are made of physical phenomena that we mistake for other (more interesting) physical phenomena. Yet, they remain physical properties. The properties themselves are not "simulated."

The bottom line, he says, is this:

Simulations are built using physical devices that produce physical phenomena. We never step into the "virtual." Nobody has ever perceived a simulated world. Why should we take for real the notion of simulated reality?

In fairness, Manzotti's arguments are just as susceptible to criticism as Bostrom's (and Musk's). Manzotti asserts that there's no precedent in human experience for confusing an unreal world for reality — but what about dreams? "They appear to be real but are simulated by our imaginations," argues cognitive scientist Jim Davies. "[Dreams are] a kind of virtual reality":

It's entirely possible that we are living in a simulation and that the real world looks a lot like the one we live in. It need not be inconceivable. We indeed have only evidence of one level of reality (with qualifications I'll get to), but we might say the same thing when we're in a dream. But dreams happen, and in the world of the dream there's no evidence of another level or reality, but there is another level of reality — the one with a brain creating the dream.

Unlike Musk and Bostrom, Davies doesn't argue that it's more likely that we live in a computer simulation than we do not; he argues that it's "entirely possible," giving voice to a quandary as old as philosophy itself: What, if anything, lies above, behind, or beyond the reality we experience every day?

Science writer Philip Ball put it into historical perspective in an article he wrote for the BBC:

Plato wondered if what we perceive as reality is like the shadows projected onto the walls of a cave. Immanuel Kant asserted that, while there might be some "thing in itself" that underlies the appearances we perceive, we can never know it. René Descartes accepted, in his famous one-liner "I think therefore I am", that the capacity to think is the only meaningful criterion of existence we can attest.

The concept of "the world as simulation" takes that old philosophical saw and clothes it in the garb of our latest technologies. There is no harm in that. Like many philosophical conundrums, it impels us to examine our assumptions and preconceptions.

Truth be told, it's just as hard to prove we don't live in a simulated reality as it is that we do, given that the only evidence we would have to go on, by definition, would be simulated evidence. In this respect, the conundrums posed by an immersive simulated reality begin to seem — well, if not trivial, at least beside the point. If it's impossible to tell whether or not the world we're living in is a computer simulation, it's probably not worth losing sleep over.

Griffin, Andrew.   "Tech Billionaires Convinced We Live in the Matrix Are Secretly Funding Scientists to Help Break Us Out of It."    Independent.   6 October 2016.