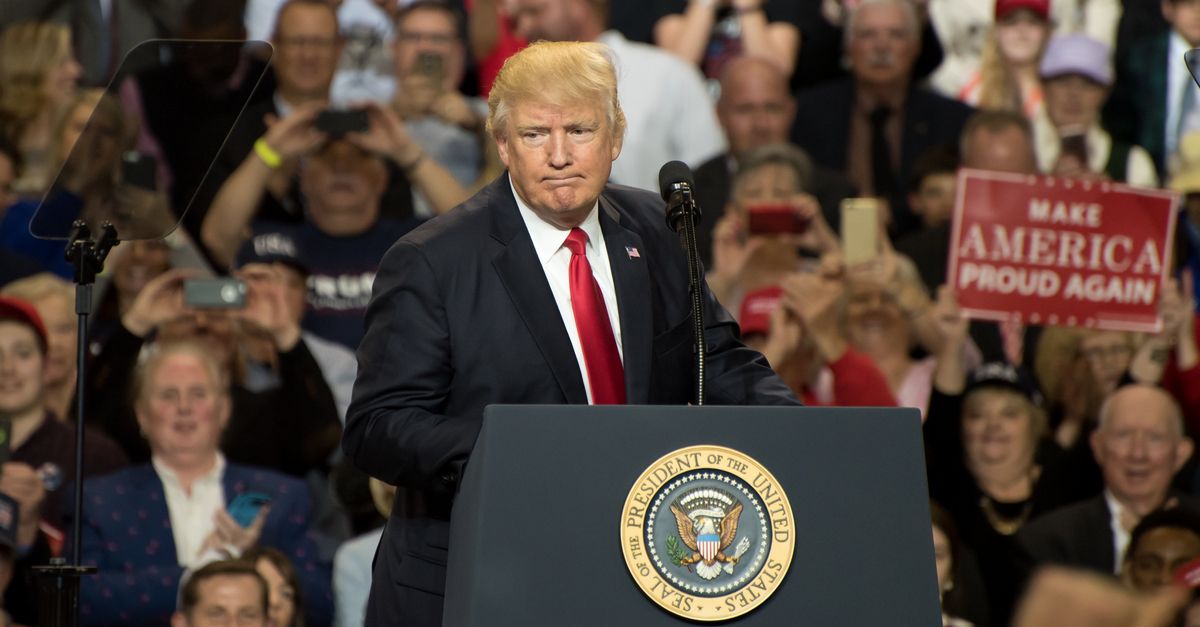 The bill — handed over during private talks in Washington — was described as “outrageous” by one German minister.

“The concept behind putting out such demands is to intimidate the other side, but the chancellor took it calmly and will not respond to such provocations,” the minister said.

Trump has criticised a number of Nato countries — Germany among them — for insufficient military spending, leaving America to pick up more than its fair share of the tab. He wants them to honour a commitment made in 2014 to invest 2% of their GDP in defence — a target met at present only by the US, Britain, Estonia, Greece and Poland.

The story was picked up by multiple news outlets, but both the German and American governments have denied the existence of any such bill. At a press conference, German government spokesman Steffen Seibert rebuffed reporters who asked about it:

We want to further strengthen our German armed forces as a result of the agreements in the alliance and to continue to provide more money for this. However, NATO does not know [of] anything like a debt account, and reports that President Trump had presented the Chancellor with a kind of bill for a concrete billion sum do not apply.

The White House also denied the report, with spokesman Michael Short telling CNBC the claim that President Trump had given Chancellor Merkel a bill was "false."

Although both sides maintained (publicly, at least) the story was not true, the topic of how much money NATO member countries should spend on their own defense has long been one of President Trump's talking points. On 15 February 2017, Defense Secretary James Mattis told the military alliance's leaders at a meeting in Brussels that the United States would "moderate" its commitment to allies if they failed to meet a goal of allocating at least 2 percent of gross domestic product to defense spending:

I owe it to you to give you clarity on the political reality in the United States, and to state the fair demand from my country’s people in concrete terms. America will meet its responsibilities, but if your nations do not want to see America moderate its commitment to this Alliance, each of your capitals needs to show support for our common defense.

Specifically, we must ensure we are not in the same spot at the end of the year that we are in today. We must adopt a plan this year, including milestone dates, to make steady progress toward meeting Warsaw and Wales commitments.

If your nation meets the two percent target, we need your help to get other allies there. If you have a plan to get there, our Alliance is counting on you to accelerate your efforts and show bottom-line results. And if you do not yet have a plan, it is important to establish one soon. Showing immediate and steady progress to honor commitments made at Warsaw and Wales must become a reality if we are to sustain a credible Alliance and adequately defend ourselves.

At the 2014 summit in Wales, NATO countries agreed to commit 2 percent of their GDPs to defense spending over the course of the coming decade. Two years after that summit, and as of 2016 estimations, only five countries (the United States, Greece, Estonia, the United Kingdom, and Poland) had met that benchmark, not including Germany, who currently spends only 1.2 percent of their GDP on defense. But NATO press officer Matthias Eichenlaub told us by e-mail that "23 out of the 28 Allies increased defence spending in 2016, so we’re heading in the right direction."

The Wales summit was held in the shadow of Russia's "aggressive" annexation of Crimea, a Black Sea peninsula that had previously been under Ukrainian control. Mattis' comments at the February 2017 Brussels conference touched on the continuing fear in Europe of further Russian expansion:

The transatlantic bond is essential to countering Islamic extremism, to blocking Russia’s efforts to weaken democracies, and to addressing a more assertive China. To remain capable in this environment, NATO must tighten its decision cycles—both in determining the actions of the Alliance, and in resourcing those decisions with robust and interoperable capabilities...

When a Danish reporter asked Mattis during a 16 February 2017 press conference in Brussels to elaborate on what he meant by "moderating" U.S. involvement with NATO, he declined to say more other than averring it is not something he ever expects to see:

I'd prefer not to [elaborate], ma'am, because basically that is the headline I do not anticipate ever seeing. By putting it out there, by being very honest among friends, we say this is a burden that we all have to carry equally and by being persuasive there you write — we will write our own headlines as a unified alliance that will stand up for each other.

And I'm very confident that we will not have to have that. Sometimes you say the things you don't want to have happen so that you head them off, but thank you.

NATO was created in 1949 in order to defend allied countries against Soviet aggression, according to the U.S. State Department.