A photograph showing a chaotic scene on the Westminster Bridge after a London terror attack was widely circulated without relevant context. 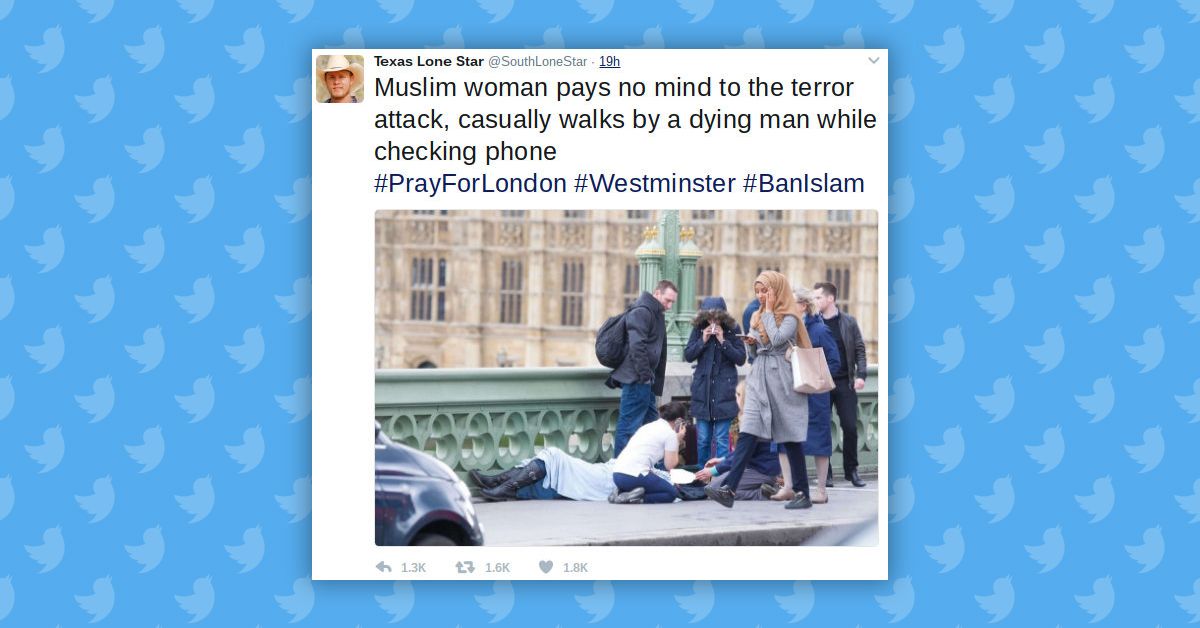 On 22 March 2017, an attack took place outside the British Parliament in London during which a man drove a vehicle into a crowd of people on the Westminster Bridge. As police responded to the incident, which left four people dead, a photograph showing a woman dressed in a hijab with a cell phone in her hand, passing by one of the victims who was receiving emergency medical aid, started circulating on social media along with disparaging remarks about Muslims: The photograph is real, but claims that the woman it depicted was paying no mind to the terror attack, and that she "casually" walked by a dying man, were not based on first-hand knowledge — that was simply someone's interpretation of a single still image, apparently based on predetermined beliefs about Muslims.

The official caption for this photograph from Rex Images stated that the woman captured in the picture was "visibly distressed" as she passed the scene:

Rex Images also provided other photographs of this woman, including one taken either just before or after the image displayed above that showed her looking up from her phone while appearing to register visible feelings of distress in her features:

Jamie Lorriman, who took the original photograph, provided more details about the scene to Australia's ABC:

Freelance photographer Jamie Lorriman [said] the woman was “distressed and horrified” but described the scene as a “strange sort of calm atmosphere”.

“No one was sort of screaming or shouting,” he said.

Lorriman said the people who thought the woman was ignoring the dying man had misappropriated the image.

“The people who [criticised the woman in] that picture are being rather selective,” he said.

“In the other picture in the sequence she looks truly distraught ... personally I think she looks distressed in both pictures.”

The photographer said it would be impossible for people who criticised the picture to know if she ignored the scene or not.

“She probably just wanted to get off the bridge,” Lorriman told the ABC.

“I feel so sorry for the woman in the picture. If she’s seen this, she must feel awful.”

The TellMAMA (Measuring Anti-Muslim Attacks) web site reproduced a statement said to be from the unnamed woman pictured in the photograph in question:

Tell MAMA is supporting the Muslim woman who was photographed on Westminster Bridge during the Westminster terror attack.

Through our support service, the woman, whose identity we protect, has given us a statement to give her side of events. We have published it in full below.

“I’m shocked and totally dismayed at how a picture of me is being circulated on social media. To those individuals who have interpreted and commented on what my thoughts were in that horrific and distressful moment, I would like to say not only have I been devastated by witnessing the aftermath of a shocking and numbing terror attack, I’ve also had to deal with the shock of finding my picture plastered all over social media by those who could not look beyond my attire, who draw conclusions based on hate and xenophobia.

My thoughts at that moment were one of sadness, fear, and concern. What the image does not show is that I had talked to other witnesses to try and find out what was happening, to see if I could be of any help, even though enough people were at the scene tending to the victims. I then decided to call my family to say that I was fine and was making my way home from work, assisting a lady along the way by helping her get to Waterloo station. My thoughts go out to all the victims and their families. I would like to thank Jamie Lorriman, the photographer who took the picture, for speaking to the media in my defence”.

Since the London attack occurred in a public space, several photographs from the scene include images of civilians, including passers-by using their cell phones, walking around the scene, or simply standing amidst the chaos. Yet, as far as we can tell, none of these people was accused of "casually" walking by victims: