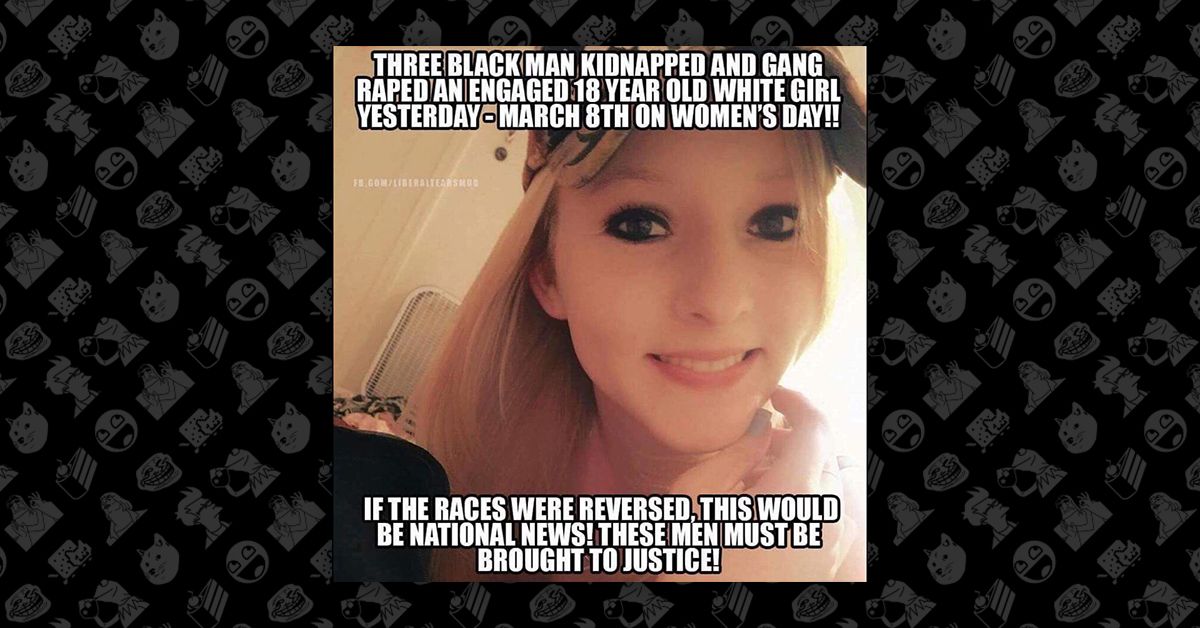 In early March 2017, 18-year-old Texas woman Breana Harmon Talbott claimed she was abducted and assaulted by three black men. Talbott's claims caused immediate controversy on social media, and many people focused on the racial aspects of the story:

On 15 March 2017, Denison Police published a statement to Facebook to quell community fears. In that statement, Burch said circulating rumors that random women were often being abducted and sexually assaulted by a person or persons in Denison were "simply not true":

According to the Dallas Morning News, police confirmed on 22 March 2017 that the socially viral abduction tale was, by Talbott's own admission, a fabrication:

An 18-year-old Texas woman's claim that she was abducted and assaulted two weeks ago were a hoax, Denison police said Wednesday.

The incident caused a whirlwind of speculation in the town near the Oklahoma border after the bloody woman ran into a church wearing only a shirt, bra and underwear and lied about two black men raping her while a third held her down, Denison Police Chief Jay Burch said.

The incident began when Talbott's fiancé reported her missing two weeks before. Talbott surfaced later that day, claiming she had been gang raped by three black men:

Breana Harmon Talbott was reported missing earlier this month by her fiancé, who said that he had found her car with its door open and personal effects such as her phone nearby.

The 18-year-old later reemerged in the city of Denison the same day, interrupting a service at a local church by walking in with visible scratches and only a shirt, bra and underwear.

Talbott told police that she was abducted, taken to a wooded area near the church and gang-raped by men wearing ski masks that she described as “three black males.”

Talbott was arrested on 22 March 2017, and charged with making a false report. In a statement, Burch was clear that the incident was being taken seriously by Denison Police, adding that additional restitution would be sought by the department, adding that police had "mobilized all available resources to look for her," even ignoring other cases to focus on finding here.

Burch also published a press release to Facebook, addressing the charges brought against Talbott and the department's plans to seek restitution:

This alleged crime as reported by Breana Harmon Talbott made many in the community fearful there were individuals abducting women. Even though we know the story to be a hoax, there is still potential damage to the reputation of the City of Denison and the Texoma region as many may remember the reported crime but not the outcome. That is unfortunate.

Breana Harmon Talbott’s hoax was also insulting to our community and especially offensive to the African-American community due to her description of the so-called suspects in her hoax. The anger and hurts caused from such a hoax are difficult and all so unnecessary.

Many persons fell victim to Breana Harmon Talbott’s hoax. The police were quickly disparaged by Talbott’s family and friends. Social media comments and opinions were out of control making it difficult to focus on solving this case. Even though we originally assumed this case to be legitimate, the great work of Denison Police Department investigators and officers quickly led to major questions as to the validity of the alleged crime. Even though we strongly felt this was a hoax soon into the investigation, it was my decision to delay notifying the public until we had 100% confirmation it didn’t happen. Plus, we wanted to insure we did everything we could on the remote chance there was any truth to the alleged crime.

It’s unfortunate a person can falsely report such a major incident in our community that wastes the time of law enforcement and needlessly puts some people in fear. I apologize to those who have current investigations with the department as we delayed those to focus on this case. As I said in a recent Facebook post, Denison has been and will remain a safe community with a great quality of life.

In the immediate aftermath of the report, a GoFundMe was established for Talbott, which raised at least $2,300. The page is no longer live, but remains archived: If convicted of making a false report, Talbott faces jail time and a $2,000 fine.