The pipeline company is proceeding with construction after being granted a final permit. 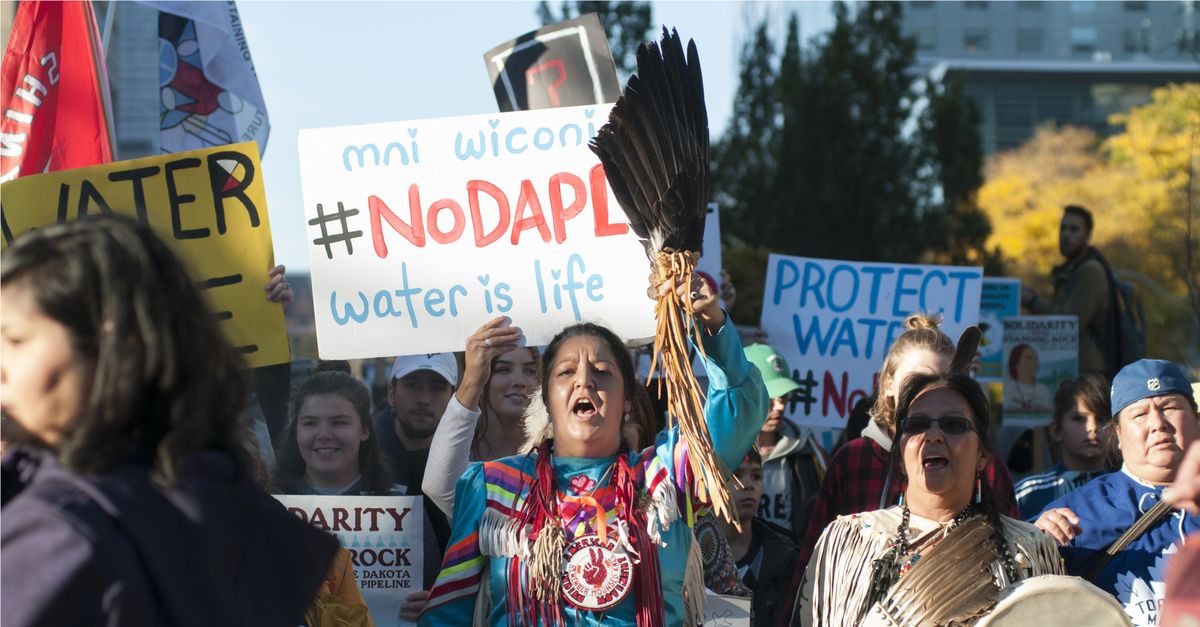 The Standing Rock and Cheyenne River Sioux tribes have filed new lawsuits in yet another legal effort to stop a 1,172-mile, 570,000 barrel-per-day crude oil pipeline that skirts the Standing Rock reservation in North Dakota within a half mile. Meanwhile, the pipeline company Energy Transfer Partners began drilling when the Army Corps of Engineers granted them an easement needed for construction to continue on 8 February 2017. The easement had been denied just two months earlier when the Corps said that an Environmental Impact Statement would need to be completed.

Thousands of demonstrators have been encamped since April 2016 in an effort to stop the pipeline from being completed and going live, and on 4 December 2016 they marked a success when the Army Corps, which manages the land in Cannon Ball, North Dakota, where the pipeline is planned, blocked construction by denying an easement needed by the energy company But after voicing support for the project as a candidate, President Donald Trump reversed course and expedited the pipeline, along with another controversial oil project, the Keystone XL, which had been blocked in 2015 by his predecessor, Barack Obama.

The Standing Rock Sioux have been bitterly opposed to the project and the threat they say it poses to their main drinking water source. The pipeline is set to go under the Missouri River at Lake Oahe, on which the tribe depends for water. The tribe have also voiced concerns over the destruction of sacred sites and ancestral burial grounds resulting from construction.

One lawsuit, filed on 14 February 2017, invokes the tribes' treaty rights and the fact that the Army Corps abruptly changed course days after beginning the environmental review when President Donald Trump took office and expedited the easement, the final permit needed for construction near the contentious Lake Oahe site:

In December of 2016, after extensive analysis and input from the Tribe and others, the Corps committed to prepare a full environmental impact statement (“EIS”) to address the Tribe’s rights, alternative pipeline routings outside of the Tribe’s Treaty areas, and oil spill risks. The decision relied on a comprehensive legal opinion by the Department of the Interior Solicitor, confirming that the Tribe retains expansive Treaty rights in and around Lake Oahe that must be assessed and protected before a decision is issued. The Corps formally initiated this process on January 18, 2017.

Within a few days of his inauguration, the new President abandoned this commitment—perpetuating our nation’s pattern of broken promises to the Tribe—and directed the Army to “review and approve” pipeline permits on an expedited basis. The Corps obeyed this direction and on February 8, 2017, issued the easement and summarily terminated the EIS process. Construction is now underway. The Tribe now seeks expedited summary judgment on claims that this easement decision, as well as the Corps’ July regulatory actions and accompanying NEPA [National Environmental Policy Act] analysis, are arbitrary, capricious, and contrary to law.

The lawsuit also notes that potential environmental destruction of the lake poses an existential threat because the tribe uses it as a food source as well:

In sum, the Tribe retains water, fishing, and hunting rights at Oahe that
are fundamental to the Tribe’s survival and well-being, and the Corps has a trust obligation to protect the Tribe’s rights when it issues permits that affect them.

The Army explained their course reversal in a statement sent to us:

The Army has always held the view that the Environmental Assessment (EA) /Finding of No Significant Impact (FONSI) prepared in support of the easement request was lawful and satisfied the requirements of National Environmental Policy Act (NEPA); therefore, an Environmental Impact Study (EIS) was not required in order for the Corps of Engineers to grant the easement.  In December of 2016, the former Assistant Secretary of the Army for Civil Works directed that additional analysis be considered, which, in her view, could have been accomplished with an EIS.  As her office stated following the December 4th decision, "Ms. Darcy had the authority to make the decision on behalf of the Department of the Army, and she did so." Subsequently however President Trump issued a memorandum to the Secretary of the Army concerning DAPL which ordered the Army to review Dakota Access, LLC's request for easement to cross the Missouri River at Lake Oahe, North Dakota. Following its review, the Army determined that the memorandum signed by the former Assistant Secretary of the Army for Civil Works should be rescinded, and the Army's previously announced Notice of Intent (NOI) to prepare an EIS be terminated."

Barring a court's blocking the pipeline, Vicki Granado, spokeswoman for Energy Transfer Partners, told us it should be ready to go live in less than three months:

We began drilling immediately upon receiving the easement last week.  We were waiting on the easement to drill on Corps land.  We estimate that the drill will take 60 days to complete (from the date of the easement) and then another 23 days to fill the line with crude to Patoka.  At that point, the line will be in service. The crossing beneath Lake Oahe will be between 90 to 115 feet below the lake bed. There is a diagram of this on the home page of daplfacts.com.

Joye Braun, member of the Cheyenne River Sioux andan  organizer who has been at the protest site in Cannon Ball, told us there are roughly 1,200 demonstrators in various camps, who currently can't get supplies, including water and firewood, due to a blockade put up by authorities to stop people from entering the protest areas. Even if the energy company completes drilling and makes the pipeline live, Braun said the tribes and their allies plan to continue the fight:

Even if they put oil through there, we still have the chance to stop them. There are so many legal ways we can still do this. It may take several years and it may take us riding out Trump but we will stand and we will keep doing what we do.

Tom King, an anthropologist who has been following the project, is critical of the Corps' approval process, noting that while pipeline is nearly complete, the overall impact of the project was never properly assessed throughout the course of its construction:

They issued something like 200 permits and those are all still in place. They simply did not examine the environment impacts of the project. They only examined very narrowly-defined locations where they were crossing streams and things like that. It wasn’t likely to be much of an EIS anyway, though a lot of us tried to make the point that they needed to back up and look at the whole project and what alternatives there are. And they simply will not do that.

He pointed to an article in Right of Way magazine that outlined the four major missteps leading to the bungled confrontation with aggrieved Native Americans that has now become associated with the Dakota Access pipeline:

The first was the use of a flawed permitting process that was designed by the federal government to fast-track smaller projects. In this instance, the Army Corps of Engineers used what is known as the Nation Wide Permits process designed for fast tracking smaller projects. That meant that a full Environmental Impact Statement (EIS) was never done and therefore, the issues that would have surfaced such as the importance of ancestral lands, were never discussed or mitigated. Using this process proved to be a disservice to all involved and launched a movement that is destined to change corridor project approvals in significant ways.

The second misstep was to move the pipeline route from private land north of Bismarck, North Dakota to skirt the Standing Rock reservation. This move began the protest, much of whose justification rests on the perceived risk of a pipeline rupture polluting the
tribe’s drinking water. The proposed construction route is within a half mile of the tribe’s reservation border, sparking concerns for protection of cultural resources that remain with the land. Religious and cultural sites are situated along the route of the pipeline, including burial sites of ancestors.

The third misstep was not identifying tribal lands or the people of the tribe—including the Standing Rock Sioux Reservation—on the original project maps. All the counties that the pipeline goes through appear on the map except the reservation. To the  Sioux, the map reflects what they consider a major issue, specifically that their existence is invisible to the formal powers. Of course, that has since changed with this massive mobilization of Native American Tribes. They are now visible and on the move.

What launched the pipeline from a local stand-off to a national cause, the authors wrote, was footage of security personnel guarding construction machinery over a holiday weekend with attack dogs while demonstrators tried to stop them from plowing through the land:

Moreover, the company deployed security personnel and guard dogs to try to prevent the protesters from their efforts to stop the work. The vision of dogs being used to attack the Sioux demonstrators and supporters brought back memories of the Selma demonstrations of the 1960s. This single act nationalized the issue—and literally overnight brought in over 200 tribes in support from North America and beyond. In addition to local landowners and environmentalists joining the protest, it is estimated that 2,000 indigenous groups worldwide have spoken in solidarity with the Sioux people.

The Army Corps has issued a 22 February 2017 deadline for demonstrators to leave federal land at the mouth of the Cannonball River "to prevent injuries and significant environmental damage in the likely event of flooding in this area." But as in December 2016, hundreds have arrived at Standing Rock to support the tribe and help with clean-up efforts, many of them U.S. military veterans. Thousands of veterans mobilized in December 2016 in an event called Veterans Stand for Standing Rock and vowed to return if needed.